This Supercomputer Was Programmed to Think Like the Zodiac Killer. No Wonder Its Poetry is So Creepy. 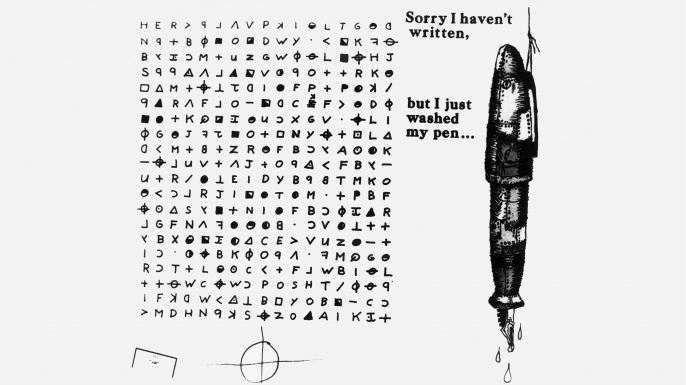 The Z340 cipher was sent to <em>The San Francisco Chronicle</em> in November 1969 along with a greeting card and a shirt fragment of one of his victims. (Credit: Bettmann Archive/Getty Images)


After being fed all the known writings of the infamous Zodiac killer, a supercomputer named CARMEL has developed the ability to think like the elusive serial murderer.
It often writes poetry like one, too.
The artificial-intelligence software was created by Kevin Knight, a professor at the University of Southern California’s Information Sciences Institute. As an expert in natural-language processing—exploring the degree to which computers can understand and create human language—Knight has in recent years been trying to help solve some of history’s most unbreakable ciphers, using CARMEL for the computational heavy lifting, testing trillions of possible linguistic solutions to find a “key.” In 2011, they were part of a team that used statistics-based translation techniques to unlock the famed Copiale Cipher, a hand-lettered 105-page manuscript from the late 18th century. Hidden in the mysterious messaging: the rituals and beliefs of a German secret society.
Now Knight, CARMEL and a team of code-breaking researchers are working with the HISTORY Channel to try and crack the Z340, the Zodiac killer’s most impenetrable cipher. In the late 1960s and early 1970s, the self-named murderer terrorized Northern California with a succession of random killings and taunting letters to the police and newspapers. Four of those communiqués contained ciphers filled with perplexing letters and abstract symbols. Cryptologists consider the Zodiac’s 340-character cipher, sent to The San Francisco Chronicle in November 1969, a holy grail of sorts.
As part of Knight’s research into what computers can do with language, CARMEL can churn out complex verse on any given topic within a matter of seconds. Or users can take a minute to set a few structural parameters, such as the number of lines, word length, alliteration patterns—even whether the poem is suitable for mixed company. “You should’ve seen it before we took the curse words out,” says Knight.
With serial killing on the brain, CARMEL can produce poetry with nightmarish tinges. Below are some fragments. Click on the audio files to hear the full poems.
At the age of love, a love deranged,
A beauty from romantic interest,
The thought of love, and love became estranged.
Then the words of love became obsessed.
Surrounded by the troubled, by the thieving,
Confused and bruised and poisoned by the master,
Confused and blinded by the helpless scheming,
Confused and blinded by the dreadful slander…
Another party started getting heavy.
And never had a little bit of Bobby,
Or something going by the name of Eddie,
And got a finger on the trigger sloppy.
Existence enters your entire nation.
A twisted mind reveals becoming manic,
An endless modern ending medication,
Another rotten soul becomes dynamic.
Or under pressure on genetic tests.
Surrounded by controlling my depression,
And only human torture never rests,
Or maybe you expect an easy lesson…Mourning moaning mournful whispers weeping,
Together through the sleepless strangers slumber,
Alone and lonely lovers sleeping thieving,
A helpless dead forgotten former lover.
Through the taxi and the prison break,
Alone and angry at a brutal murder.
Surrounded by an artificial lake,
Never a convicted murderer…
Posted by free heip at 08:02