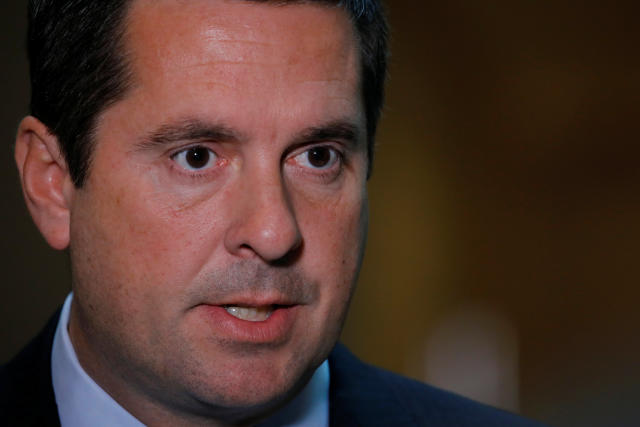 In a harsh rebuke of Rep. Devin Nunes, House Minority Leader Nancy Pelosi sent a letterto Speaker Paul Ryan on Thursday demanding that Nunes step down from his position as chairman of the House Intelligence Committee.
Thursday’s letter comes a day after Nunes was accused of making “material changes” to a secret memo before it was sent to the president for public release. The memo reportedly accuses the Justice Department and the FBI of inappropriately surveilling Trump campaign adviser Carter Page. Democrats have called the memo misleading, and in a rare public move, the FBI has warned that the memo withholds key facts.
“As expressed during our initial review, we have grave concerns about material omissions of fact that fundamentally impact the memo’s accuracy,” the FBI said in a statement.
Pelosi, the Democratic House leader, blasted Nunes in her letter, saying the California Republican has “disgraced the House Intelligence Committee.”
“It has now come to our attention that Congressman Nunes deliberately and materially altered the contents of the memo since it was voted on by the House Republicans,” Pelosi said. “This action is not only dangerous, it is illegitimate, and violates House rules.”
Ryan must “put an end to this charade,” Pelosi said.
“Congressman Nunes’ deliberately dishonest actions make him unfit to serve as Chairman, and he must be removed immediately from his position,” she said.
Posted by free heip at 12:30