Ready Player Zhou: American skater is a force to be reckoned with and a voice to be listened to

PYEONGCHANG, South Korea – One of Vincent Zhou’s favorite authors is Ernest Cline, who has written a New York Times bestseller called “Ready Player One” about a dystopian future in which a clever teenager tries to navigate a world that has careened out of control. The protagonist is a boy named Wade Watts. Zhou may yet have a lot in common with him.
To speak with Vincent Zhou is to be inspired, intrigued and frightened. He has already made history in his sport this week, by being the first to land a quadruple lutz in Olympic competition. But conversations with this 17-year-old move away from skating as quickly as he takes off from the ice surface. He has complex thoughts about automation, evolution, world war, and the millennial generation.
“I’m not a typical American kid,” he says, “because I’m a Chinese-American kid.”
It’s something he takes deep pride in, and it’s also something that leads to an ambivalent view of American youth. His parents arrived here from China in 1992 “with nothing but the clothes on their backs,” he says, and they passed their intense will on to him. He hasn’t found the same drive in many of his peers.
“All I’ve been through all of my life has contributed to my perspective on the world,” Zhou says, “which includes the realization that this new generation of millennials, they all expect things to be handed to them on a golden platter. They take their possessions and shelter and clothes for granted and they spend their time doing drugs and partying and not putting effort into things that matter.”
He does not say this with spite or even much emotion. Zhou is incredibly analytical for someone his age, or any age. He almost views himself from an outsider’s perspective. “In the grand scope of the universe,” he says, “I don’t really matter at all.”
He matters a lot in 2018, however. And he will likely matter even more in 2022. He has two home countries: that of himself and his sister, Vivian, who is at MIT, and that of his parents and grandparents, who were born in China. He will likely be an American Olympic favorite competing in Beijing. He represents the future of our world, all 135 pounds of him, and that’s both thrilling and daunting.
“I hope to make a change,” he says. “Maybe I could do some public speaking. I just hope people will be aware of this situation. I hope people will recognize the problems that are happening in our society. Everybody thinks they have the right for all their wishes to be fulfilled. And when it does get fulfilled, they start blaming the people around them for not doing well enough.”

He is, of course, doing some public speaking already. He’s in the Olympic Village, doing media interviews in the temporary pavilion of Alibaba, the biggest retail commerce company in the world. It’s a Chinese company that became the largest IPO ever when it debuted in 2014. All around him there are displays of facial recognition and other advanced software models. It’s a good backdrop for a teenager who took Algebra II at age 12 and graduated high school at age 16. “Even as we speak,” Zhou says, “there are scientific developments going on that are beyond our comprehension.”
That part is thrilling. Zhou even playfully suggested that one day there would be a skate boot that could propel a performer into more rotations and higher jumps than we can imagine now. But there are other parts of the future that worry him.
“If you think about all the global conflict going on right now,” he says, “there’s probably bound to be another world war in the next 20 years.”
The dystopia in Cline’s book is dark, indeed. In the story, an energy crisis and global warming have corroded society. Zhou is voracious in his reading, and even says he has reread favorite books several times. He mentions how he stumbled upon a book about a scientific simulation that goes all the way back to “primordial soup” and, when fast-forwarded ahead of our time, discovers that “robots engulf the human population.”
He imagines that at some point, sports will be deeply affected by this rapid advance in technology. He just doesn’t know how or when. He is prepared for warp speed, both in society and in his own life. It’s happening now. He’s only sent 210 tweets from his account (as of this writing) and he has more than 13,000 followers. His Twitter bio describes him as an “existential contemplator.”
“At this point a lot is about how can we use technology to make humans bigger, better, faster, stronger,” he says. “It’s going to develop beyond our control soon. We know what we’re getting into but we also don’t. The future is so volatile; it’s kind of crazy to think about it.”
Zhou does not cast himself in this drama. He wants to get a business degree “because it’s very practical” and work toward the next Olympics. Still there’s a unique role for him, as an athlete and beyond. He is only 17, yet he’s an old soul. There will be a need for people like him.
“The future is bright but at the same time it could be a little bleak because humanity is not headed in the right direction,” he says. “If there is a world war, the other countries won’t even have a chance to destroy us because we’ll destroy us before they can. That is kind of a pessimistic outlook on it, but at the same time it’s a very realistic outlook on it.”
He is just a skater now, but he will be a voice. Whether Vincent Zhou is a real-life Player One or not, the world is starting to listen. 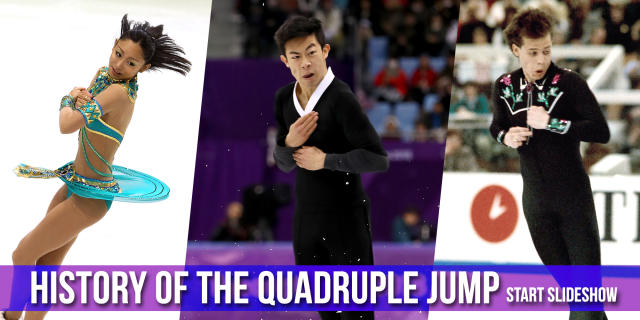