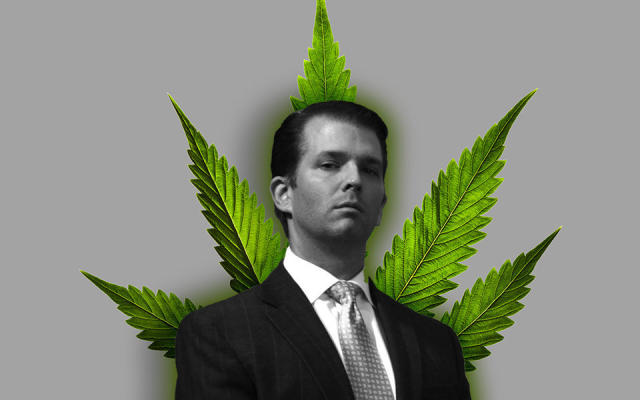 For many people, Donald Trump Jr.’s Twitter account is the gift that keeps on giving. This time, stoners are the recipients.
On Thursday, NBC reporter Andrea Mitchell tweeted about the risks of releasing a secret Republican memo alleging FBI bias against President Donald Trump.
The president’s son responded with this tweet that seemed to reference The Washington Post’s slogan, “Democracy Dies In Darkness.”
However, there was one teeny-weeny, itsy-bitsy typo that changed the meaning of the message.
For those not in in the know, the word “dankness” is actually a positive term among marijuana enthusiasts, one used to describe cannabis that Urban Dictionary says is “superdank,” the “stickiest of the icky” and “the craziest of the haziest.”
To put simply: really good weed.
Many people found the typo hilarious and let Trump Jr. know they approve wholeheartedly.
Sure, some had reservations with the actual message Trump was attempting to send, but why let that get in the way of a giggle, right?
Other people had serious questions how the word showed up on Trump Jr.’s phone, considering its status as a marijuana slang term.
One man helpfully suggested that both Trump and his dad embrace “dankness” more often.
The typo sparks memories of one made by the president in May that drew a frenzy of attention. “Despite the negative press covfefe,” Trump tweeted. After much speculation as to the meaning of the tweet, Trump later deleted the message, posting, “Who can figure out the true meaning of ‘covfefe’ ??? Enjoy!”
To Trump Jr.’s credit, he has not edited or removed his tweet as of Thursday afternoon.
Washington Post reporter Mark Berman appears to prefer this version of the paper’s slogan over the current one.
Posted by free heip at 12:35