Tom Brady is being scrutinized for sharing an “uncomfortably” long kiss with his 11-year-old son on his documentary show “Tom vs. Time.”
On Tuesday, many on Twitter reacted negatively to a scene in episode three, depicting Tom, 40,  receiving a body treatment, while John walks in asking if he can check on his fantasy team. “What do I get?” asks Brady, as the boy walks over to give him a kiss. “That was like a peck,” Brady jokingly complains, so the boy kisses his dad again. 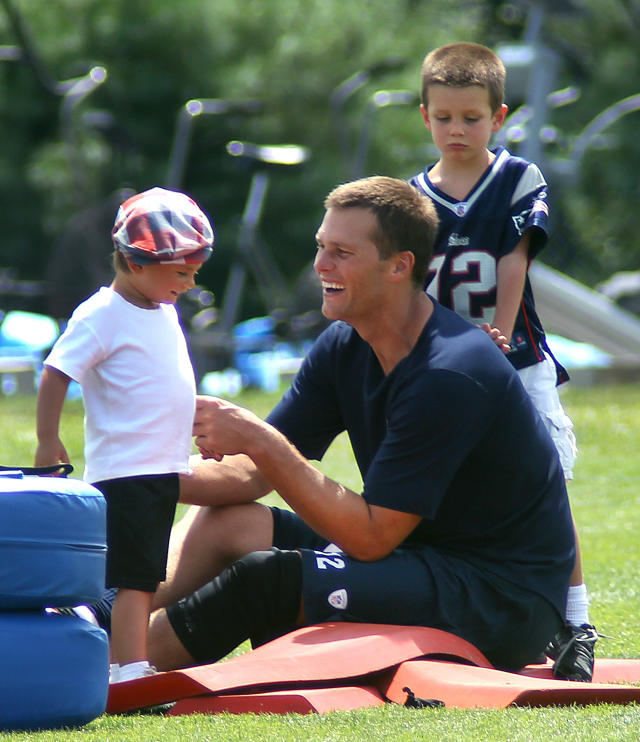 The docu-series follows Brady’s life as a New England Patriots quarterback and father of three children — 5-year-old Vivian, and 8-year-old Benjamin Brady whom he shares with supermodel Gisele Bündchen and John “Jack” Moynahan, his 11-year-old son from a previous relationship with actress Bridget Moynahan.
The sweet moment of affection between father and son was dissected on social media.
Later in the episode, Brady spent time with Vivian, snuggling on the couch. “Oh my god, look at that girl, how adorable,” said Brady as Vivian runs into the living room and jumps on her dad. “I love this dress and your tights…all the time I can get with them, I love.”
On Monday, Brady’s daughter was in the spotlight after now-suspended employee Alex Reimer of Boston radio station WEEI called her an “annoying little pissant” while reviewing the premiere episode of Brady’s show.
After hearing the remark, Brady called the station, where he has a weekly segment, saying, “I’ve tried to come on this show for many years and showed you guys a lot of respect. I’ve always tried and come on and do a good job for you guys. It’s very disappointing when you hear [the comments about my daughter], certainly. My daughter, or any child, certainly don’t deserve that.”
Other celebrities have been criticized for kissing their children on the lips, most recently David Beckham, who in June posted an Instagram photo featuring him lip-kissing 5-year-old daughter Harper, whom he shares with Victoria Beckham.
A month later, Victoria drew gasps for kissing Harper on the lips, in an Instagram photo that some felt was inappropriate.
Brady also received flak for kissing his father, John Sr., on the mouth, after winning the Super Bowl in 2017 and he’s also been photographed kissing his mother Galynn on the lips.
“Kissing one’s child on the lips isn’t confusing — it’s society that confuses things,” Jonathan Alpert, a Manhattan-based psychotherapist and author of Be Fearless, told Yahoo Lifestyle in July. “The act is no different than sleeping in the same bed with a child, but people rarely label that sexual.”
He added, “At the end of the day, people are parenting from afar and the public is drawing a big conclusion based on a fleeting moment of affection…” said Alpert. “Sometimes a kiss is truly just a kiss.”
Posted by free heip at 11:28