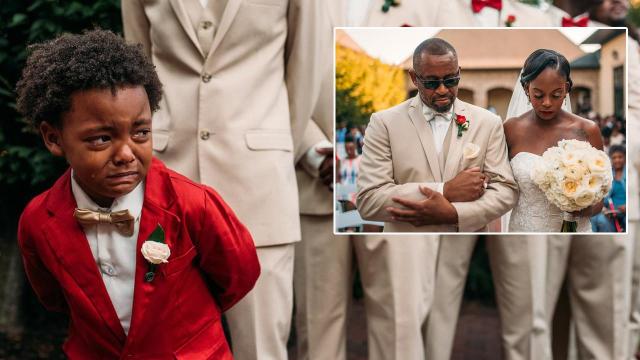 A 5-year-old boy was overcome with emotion as he watched his mother walk down the aisle at her Ohio wedding.
Tearra Suber said she didn’t notice her then 5-year-old son, Bryson, was so emotional until she got closer to the altar at her 2016 wedding.
Bryson was serving as a ring bearer.
“It melted my heart,” Suber said. “Seeing him express him those powerful emotions is one of my most cherished memories to date.”
The mom said when she later asked Bryson why he was emotional he said he was "very happy" to see his parents tie the knot.
Suber said she wasn’t expecting his reaction and it was amazing to have it caught on camera.
“When I first saw the photo, the tears were flowing,” Suber said.
The couple’s photographer, Paul Woo, has since posted the special moment on social media where it went viral.
Suber said many people now feel like they were apart of the couple’s day because they got to share in the moment.
Posted by free heip at 11:26