A man in the country illegally has been charged with a federal crime after two gun scares, including one involving an AR-15-styled rifle equipped with a scope and bump stock outside a downtown Indianapolis hotel on the day of the Women's March with thousands of attendees.
Ahmed Alaklouk, described in federal court documents as a Tunisian native and Saudi Arabian citizen, has been living in Indiana on a terminated student visa. Federal law prohibits someone in the country illegally from possessing guns or ammo, but court records say police found him with weapons on two occasions in January.
Alaklouk, 22, also faces criminal charges in Indianapolis in connection with one of the incidents when he's accused of threatening to kill two people.
Court records show U.S. Department of Homeland Security placed an immigration detainer in Marion County Jail for Alaklouk. Detainers are used to hold a suspect in jail while federal agents obtain a warrant to begin deportation proceedings.
Alaklouk's attorney in the local case, Jennifer Lukemeyer, declined to comment on Sunday.
In country illegally: Why the suspect in Colts player Edwin Jackson's death wasn't deported a year ago
The making of a monster: How Larry Nassar abused hundreds of gymnasts and eluded justice for decades
The first of Alaklouk's two run-ins occurred around 3 a.m. on Jan. 20 at the Hyatt Regency in downtown Indianapolis, according to court records.
Hotel security saw several firearms inside Alaklouk's truck parked at the hotel: six handguns in the back seat, and a rifle in the front seat.
Security called Indianapolis Metropolitan Police Department officers. As police investigated, Alaklouk approached and said the truck belonged to him. Police told him to secure his weapons in a hotel safe or out of sight in his vehicle because leaving them in the open could result in a break-in.
Alaklouk unlocked the truck and moved the rifle to the back seat, records say.
As Alaklouk moved the rifle, officers saw that the weapon — which had been modified to function and look like an AR-15 — also contained a scope, bipod and bump stock.
Alaklouk told police his rifle was "fully tricked out" and belonged to his father, according to court documents.
AR-15s, a popular gun for hobbyists, have also been used to commit mass shootingsin the United States. Stephen Paddock, the accused gunman in the Las Vegas shooting last October, is said to have mounted his numerous rifles with a collection of scopes, bipods and bump stocks.
Bump stocks essentially modify a semi-automatic rifle to use the weapon's recoil to replicate fully automatic firing. They are legal, but President Donald Trump's administration is pushing to outlaw them. (On Saturday, the Department of Justice took a first step by submitting a notice to the Office of Management and Budget in the White House that would lead to a ban.)
Around 7:45 a.m., hotel security again looked through the truck window and saw the rifle near the passenger seat. Security remained concerned because Alaklouk's hotel room overlooked the gathering area of the Women's March planned for that day. At least 3,500 people would later attend the march.
Security and IMPD removed Alaklouk, and two other unidentified men in the room, from the hotel later that morning.
Detectives monitored Alaklouk from outside the business he owns, Medo Tire Shop, 3546 W. 16th Street. He did not leave that day, court records say.
But the suspicions at the hotel prompted the U.S. Department of Homeland Security to begin investigating Alaklouk's immigration status and whether he could possess guns.
Investigators found Alaklouk's student visa had been terminated in September 2017, court records say.
About a week after being escorted from the hotel, on Jan. 27, Alaklouk's second gun incident occurred at the tire shop.
In an interview with police, a woman said she bought a tire from Medo Tire but it did not hold air. She and her father went to the shop, where a disagreement about the tire led to an argument and, eventually, a fight. 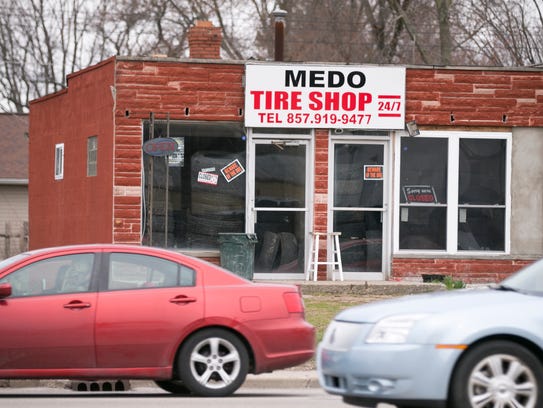 Ahmed Alaklouk, who, according to court records,
owns Medo Tire Shop, 3546 E. 16th Street,
Indianapolis, Sunday, March 11, 2018. On January
20, Alaklouk had a room at the downtown Hyatt
Regency, and illegally possessed a number of
firearms, at the time of a rally at the Indiana
Statehouse across the street.
Court records say Alaklouk grabbed the woman's father by the neck and threw him to the ground. As he tried to get up, two of Alaklouk's employees surrounded him.
Alaklouk and one employee then each pulled a handgun, records say.
The woman then pulled a handgun from inside her car and fired it into the air, police say.
Alaklouk then went into the tire shop and returned with his rifle, records say. And he told the woman and her father: "If you leave, I'll f------ kill you."
After he told his employee to hold the two, Alaklouk then pulled his truck behind the woman's vehicle so she could not leave.
The woman called police. Alaklouk dropped his handgun when officers arrived.
Officers found another handgun inside. Both were pellet guns resembling semi-automatic pistols, police say. At Alaklouk's home, officers also found a 9mm handgun.
In an interview, Alaklouk told police that he obtained the rifle in exchange for working on a customer's car, court records say. He said he lied to police a week earlier when he said it belonged to his father.
He also said he kept guns in his vehicle because his wife did not want them in the home, according to court records.
An IndyStar journalist visiting the tire shop Sunday found a sign saying it was open 24/7 but the windows were dark and the doors were closed. Outside, a few piles of old tires laid discarded along the store's parking lot.
Alaklouk was charged in Marion Superior Court on Jan. 31 with two felony counts of criminal confinement, two felony counts of intimidation, one felony count of unlawful possession of a firearm and a battery misdemeanor.
The federal gun charge came Wednesday.
If convicted of the state charges, Alaklouk could face up to 16 years in state prison for each of two felony counts; up to six years each for two other counts; and up to 2 1/2 years for the fifth felony count.
If convicted of the federal gun crime, Alaklouk could face up to 10 years in federal prison.
Indystar photojournalist Robert Scheer contributed to this story.
Call IndyStar reporter Ryan Martin at (317) 444-6294. Follow him on Facebook and on Twitter: @ryanmartin