Will Trump Fire Rosenstein? It May Not Matter. 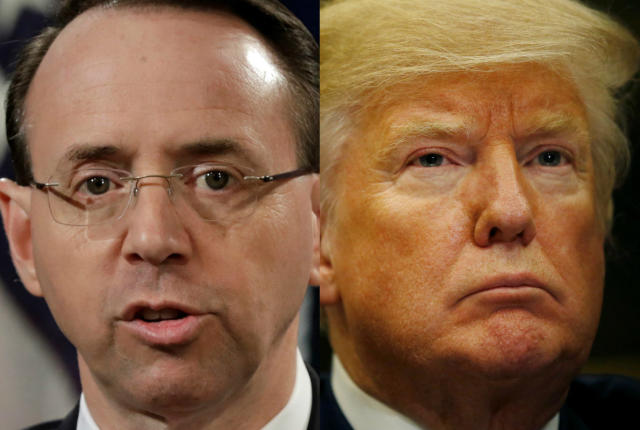 Something very fishy happened last week. On Friday, we were treated to almost hourly rumors that President Donald Trump’s firing of Deputy Attorney General Rod Rosenstein was imminent. This was to be followed by a scheme to either fire or drastically limit the authority of special counsel Robert Mueller.
The cable channels went into overdrive and the newspapers picked up the story. Critics issued dire predictions.
And then exactly nothing happened. So what was this about?
Piecing this together, it’s clear tha first reported by The Washington Post, and then other news mediafound sourcesto confirt at midweek, my old pal Steve Bannon managed to get through to Trump, and pitched him on one more trademark Bannon scheme: Fire Rosenstein and cease cooperating with Mueller, citing executive privilege. Bannon also called on Trump to fire lawyer Ty Cobb.
This wasm that Trump was livid and that the plan was under very serious consideration.
But Rosenstein is still there, and so is Mueller. On Sunday morning, White House press secretary Sarah Huckabee Sanders said she was not aware of any plans to fire either.
A prime source of the leaks keeping this tale alive was surely Bannon himself. He evidently hoped to jam Trump into going along with the scheme. I have not been able to confirm this with Bannon ― he no longer returns my calls ― but this is his signature modus operandi, and he went on the record with the Post to kick it off.


Trump is damned either way. If he fires Rosenstein and Mueller, he hastens his own downfall. If he lets things play out, the waters keep rising.

But as often happens with Bannon’s grand designs, this one backfired. Dithering Republicans, including several senators, were quick to send clear messages to Trump that this move would mark the beginning of the end of his presidency. For the first time, Senate Judiciary Chair Chuck Grassley (R-Iowa) agreed to fast-track a bill protecting the special counsel’s independence. And one can only imagine how many Republican senators phoned Trump to warn in private what they have not said publicly.
Posted by free heip at 06:55