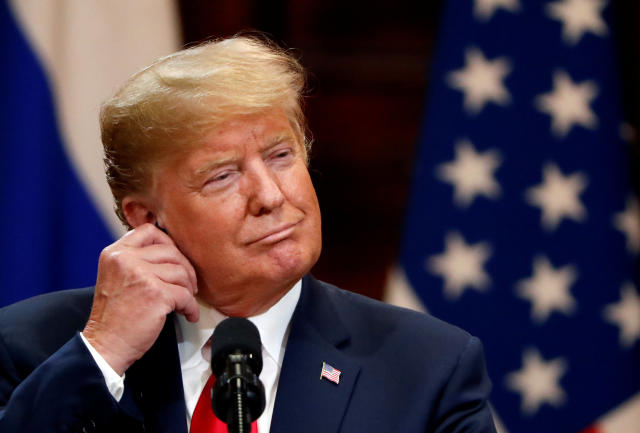 President Donald Trump’s performance during a press conference after a summit with Russian President Vladimir Putin in Helsinki on Monday left critics of all stripes howling.
Trump refused to blame Putin for Moscow’s interference in the 2016 U.S. presidential election and told reporters that “both countries” were responsible for the poor state of their relations.
“I think we’ve all been foolish. I think we’re all to blame,” Trump said.
He reiterated that there was no collusion between his presidential campaign and Russia, slammed special counsel Robert Mueller’s investigation of Russian interference in the election as a “disaster” and shared conspiracy theories about why it’s important for the FBI to take the Democratic National Committee’s computer server.
Putin agreed with Trump on many points, and Trump’s comments drew fierce criticism from Republicans and Democrats alike.
John Brennan, a CIA director under Barack Obama, called Trump’s performance “treasonous.”
Moments after the press conference, CNN’s Anderson Cooper said it was “one of the most disgraceful performances by an American president at a summit in front of a Russian leader.”
On Fox News Business, several guests reacted by saying that Putin outmaneuvered Trump during the summit.
On the channel, the network’s Neil Cavuto termed Trump’s performance “disgusting.”
The Drudge Report, a top conservative news site often friendly in its coverage of Trump, featured the headline “Putin Dominates In Hel.”
George W. Bush’s press secretary Ari Fleischer, who often defends Trump, said he can understand why some Democrats believe Putin must have compromising information on Trump.
Sen. Chris Murphy (D-Conn.) called Trump’s trip to Europe, which included contentious stops in the U.K. and Belgium, as “one giant middle finger” to the U.S.
Meghan McCain, a co-host of ABC’s “The View” and a daughter of Sen. JohnMcCain (R-Ariz.), tweeted that she was “horrified” by the pressconference.
Former Secretary of Defense Chuck Hagel, a Republican, said Trump“failed America today.”“It’s a sad day for America,” Hagel said Monday during an appearanceon CNN. “It’s a sad day for the world.”
Posted by free heip at 12:10