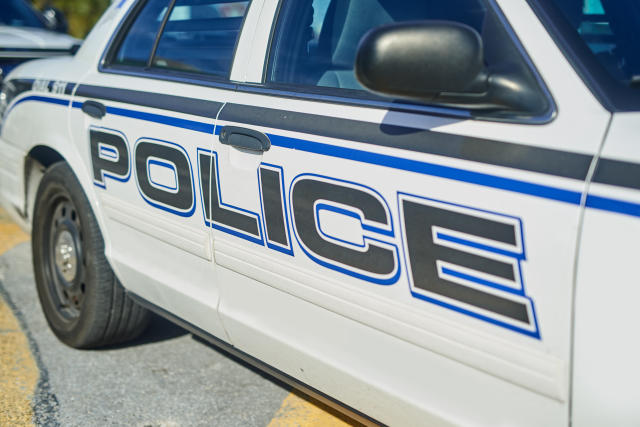 A group of high school students launched a peaceful protest to support a classmate whose teacher reportedly called the police on him because he wore a bandana.
On Friday, 17-year-old Valentino (whose last name is omitted to protect his privacy), a new student at Apache Junction High School in Arizona, was headed to lunch when a teacher asked him to remove his blue bandana.
On previous occasions, Valentino says, he complied when asked to remove the accessory, but after several months of seeing other students —  “who are usually white” — wear it without penalty, Valentino continued to wear it. Not just a fashion statement, the bandana holds significance to Valentino as a tangible reminder of a difficult childhood.
“I told the teacher that I would remove the bandana if others did the same,” Valentino tells Yahoo Lifestyle. “She said, ‘If you don’t remove it, I will call the police.’ I said, ‘If you need to call them, you should,’ and walked back to my lunch table.” 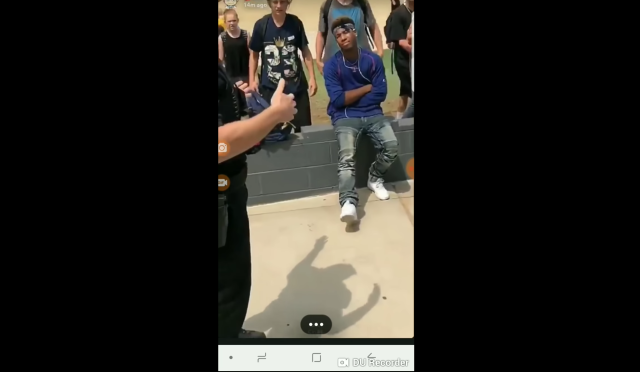 Valentino says the teacher made a radio call and then approached him with a police officer, who suggested that his bandana was gang paraphernalia — which the teen denies — and a violation of the school’s code of conduct, which prohibits “the use of hand signals, graffiti, or the presence of any apparel, jewelry, accessory, or manner of dress or grooming that, by virtue of its color, arrangement, trademark, symbol, or any other attribute indicates or implies membership or affiliation with such a group.”
“When I asked the officer what was wrong with my bandana, he said, ‘It’s blue and other people have ruined that color,’” says Valentino. “I pointed to a student wearing a bandana with an American flag pattern, and he said, ‘That’s for America.’”Valentino says the police officer threatened to arrest him for not complying, to which he answered, “I didn’t break the law and I don’t understand the problem.’”
That’s when students began filming the scene, five minutes of which was uploaded to YouTube.
“The officer said it had nothing to do with my skin color or harassment but that I was breaking the law,” says Valentino, adding that when the school bell rang to start class, he walked away from the officer, who grabbed him by the arm.
Another officer arrived and the teen was handcuffed. “I kept saying, ‘Let me go, this isn’t why I come to school,’” says Valentino, who was then driven to a station. “The police threatened to press charges because I was ‘disrespectful,’” Valentino says. He also says that an officer asked what he had “thrown on the floor” before entering the station, an accusation the teen contests, given that he was handcuffed.
After six hours, Valentino was released and is currently suspended from school for nine days. Apache Junction Police Department spokesperson Rob McDaniel tells Yahoo Lifestyle that he cannot comment on juvenile investigations, and the records release office did not return a request for more information.
According to the Apache Junction Independent, Valentino was charged with disorderly conduct. 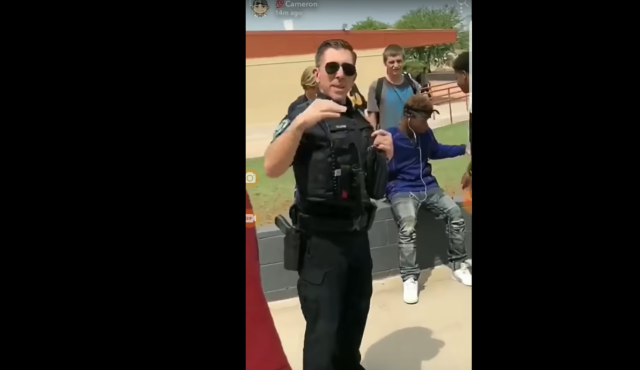 A spokesperson for the Apache Junction Unified School District also told Yahoo Lifestyle that due to privacy laws for students, it could not comment.
The Independent reported that principal Angela Chomokos sent a letter to parents Friday, a portion of which read, “The incident began when a student was instructed by an administrator to remove a bandana used as a headband. The refusal to respond to a reasonable request escalated to a point where some students were confusing the wearing of the bandana with defiance and disorderly behavior. This particular situation became escalated when students posted videos on social media sites.”
The letter continued, “At AJHS we do not condone the disorderly/defiant behavior and will take the necessary disciplinary and legal action to discourage it from happening.”
However, on Monday, a group of Apache Junction students wore bandanas to school in support of Valentino, a gesture the teen says he appreciates. Parent Chris Say, whose two daughters attend the school, tells Yahoo Lifestyle that his children, along with others, were called to the principal’s office and, after a lecture, were allowed to resume classes.
“I heard one student brought 14 extra bandanas to school so others could participate,” Say tells Yahoo Lifestyle. “Valentino is known for being a sweet kid. He’s not a troublemaker.”
Posted by free heip at 08:31