'Be happy, be cool': Trump tweets once again about NFL protests 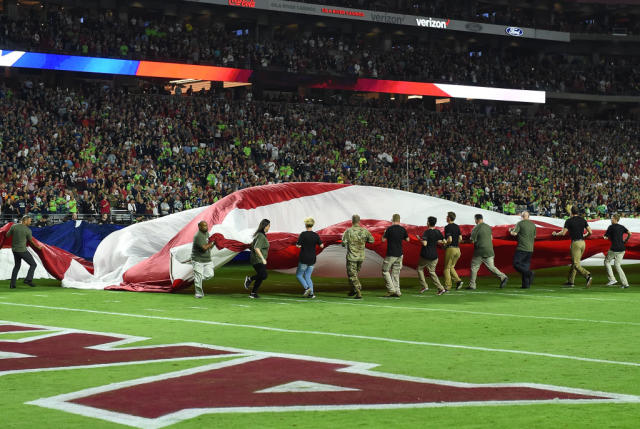 It is our solemn duty to report that the President of the United States is once again tweeting about the NFL.
You now have two options. You can tap out now and read about the actual games(Andrew Luck came back! Baker Mayfield looked good! Saquon Barkley is the truth!) or you can continue to read about the intersection of sports and politics. The choice is yours, but should you continue, you have voided all rights to complain that no one “sticks to sports” anymore.
Still with us? Cool. Let’s dig in.

The NFL preseason has begun, and so have the protests

Thursday night marked the official start of the NFL season, and with it the return of protests during the national anthem. Players from the Dolphins, Eagles, and Jaguars all offered up some form of protest, despite the fact that the NFL had threatened fines or worse for players who protested.
Roughly half of all Americans are against the protests in some form, according to multiple surveys, but it’s worth noting that the protesters aren’t a horde of unpatriotic malcontents looking to stir up trouble. The players are fully aware of the potential consequences of protesting, and do so anyway. The players understand that they are risking their entire careers, and they protest anyway. To carry this a bit further: it’s almost as if they believe in something more than just making money and playing football.
“As a man I gotta stand for something,” Jaguars linebacker Telvin Smith said after staying in the locker room during the anthem. “I love my team, I’m dedicated to my teammates and that’s what we’re talking about. I did what I did. It was love. I hope people see and respect it. I respect different views. I love the military. I wore my Salute to Service cleats today. It’s love.”
And then the president weighed in.

‘Find another way to protest’

In between a stream of commentary on collusion and tariffs, Trump offered up two tweets on the NFL protests:
“The NFL players are at it again – taking a knee when they should be standing proudly for the National Anthem,” Trump tweeted. “Numerous players, from different teams, wanted to show their ‘outrage’ at something that most of them are unable to define. They make a fortune doing what they love………..Be happy, be cool! A football game, that fans are paying soooo much money to watch and enjoy, is no place to protest. Most of that money goes to the players anyway. Find another way to protest. Stand proudly for your National Anthem or be Suspended Without Pay!”
The protests began nearly two years ago, when then-San Francisco 49ers quarterback Colin Kaepernick knelt to protest social inequality and police brutality. Trump claims in these latest tweets that players are showing “outrage,” a word which he places in mocking quotes, “at something that most of them are unable to define.” This is simply not true. Not only have the players “defined” their reasons for protesting on literally dozens of occasions, they did so this summer in a direct letter to Trump himself in the New York Times.
Trump echoes common refrains of protest opponents: the players are rich, so why can’t they be happy; a football game is no place to protest. But again, that sidesteps the entire point of protests: it’s possible to be concerned with larger issues than one’s own paycheck. And a protest done in a way that’s comfortable for the intended audience is a protest that gets ignored.
More fact-checking: NFL players receive 47 percent to 48.5 percent of the league’s defined revenue, a share they won’t be able to renegotiate until 2020. So the idea that “most of that money [that fans spend on games] goes to the players anyway” is, again, simply not true.
Plus, the idea that players should “Stand proudly for your National Anthem or be Suspended Without Pay” simply does not apply, given the NFL’s current rules. The NFL released a statement to that effect shortly after the initial wave of protests Thursday night:
We’ll doubtless return to this exact storyline many, many times this season — remember, you had the chance to bail out of this article ten paragraphs ago — and each time, we’ll return to the same themes. The players aren’t un-American; they want to be heard. The NFL owners brought this on themselves by trying to appease Trump. The president is hammering away at an issue he knows plays well with much of America, framing the issue in deliberately simplistic terms.
Fans have every right to be upset about the protests, and they’re not wrong for wanting a politics-free sporting event. But it’s important that they keep in mind who’s really perpetuating the need for protests. As long as the NFL worries about Trump’s reactions, it’s vulnerable to his blowtorching. As long as Trump needs an easy, low-risk, high-reward hot-button issue to fire up the base, he’ll tweet-blast the protesters. And as long as players feel they’re not being taken seriously, or they’re being misrepresented as unpatriotic and ungrateful, they’ll keep protesting.
Posted by free heip at 08:50