A manhunt is underway in Italy after two British tourists stripped and posed for photos in a fountain at one of Rome's most famous monuments.
One of the Britons can be seen removing his underwear as the two men frolicked in the water at the foot of Altare della Patria in the Italian capital.
Others filmed as the men laughed and jokingly flexed their muscles in front of bemused tourists.
Police are now hunting the pair after their antics were captured on camera by a tour guide at the landmark - a monument to war dead that was originally built in honour of Victor Emmanuel II, the first king of a unified Italy. 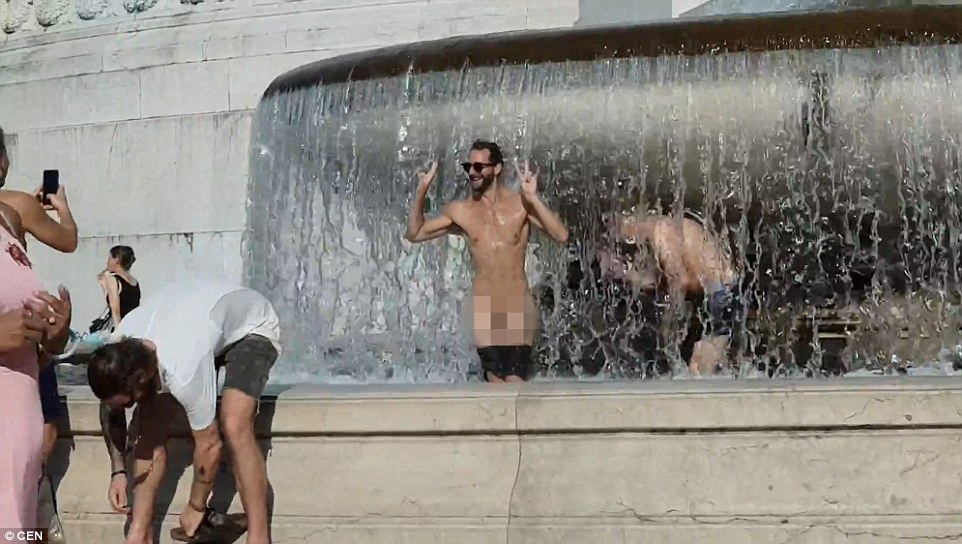 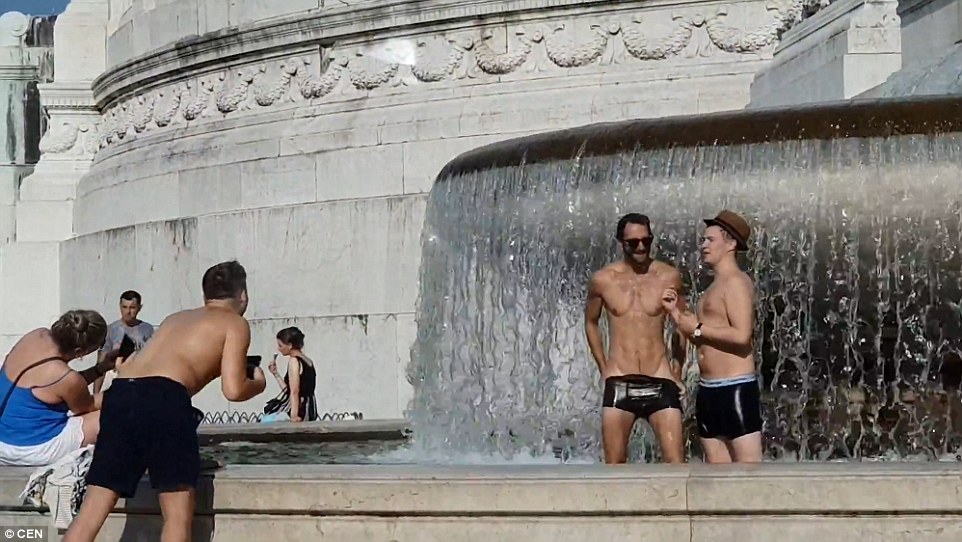 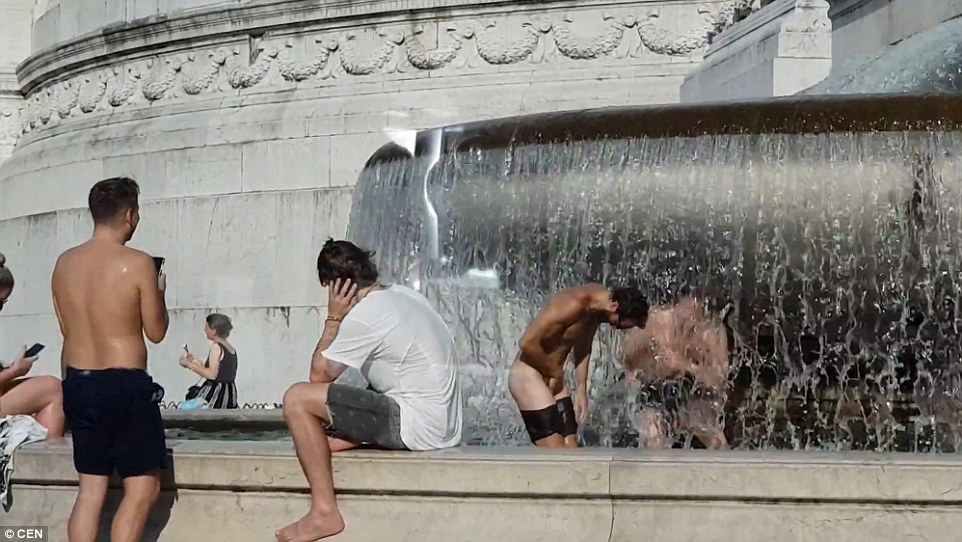 Police are now hunting the pair after their antics were captured on camera by a tour guide at the landmark - a monument built in honour of Victor Emmanuel, the first king of a unified Italy 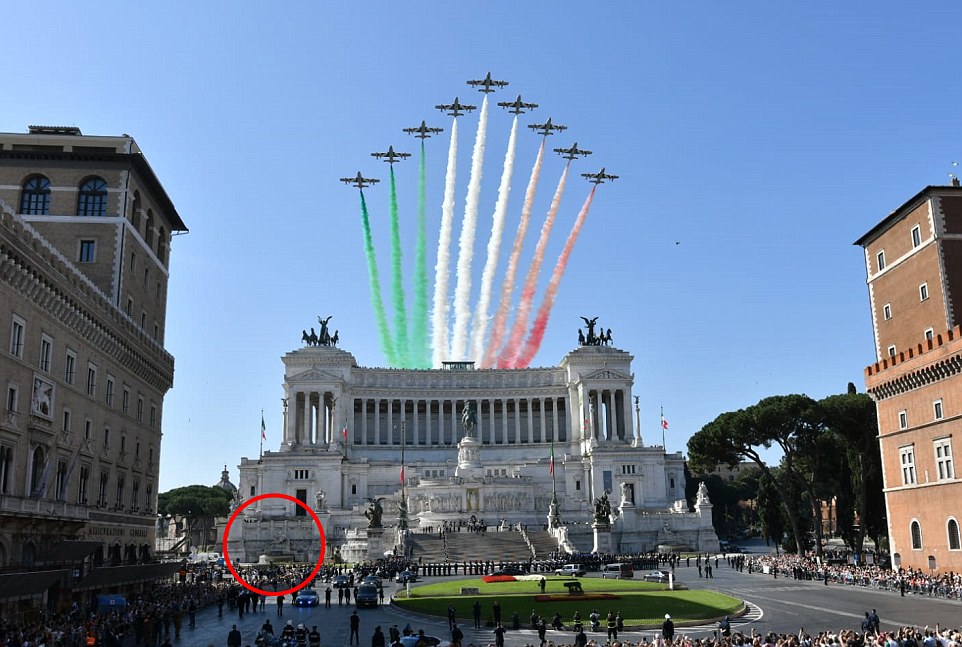 Victor Emmanuel II (1820-1878) was the first king of a unified Italy after centuries of the country being split up into small states.
Much of northern Italy was in the mid-1800s controlled by Austria through the Hapsburg dynasty.
He inherited the small kingdom of Sardinia-Piedmont in 1849 when his father abdicated after a failed independence war against Austria. 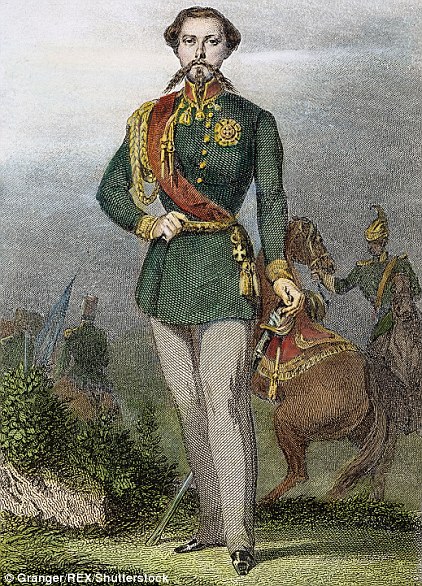 Victor Emmanuel allied with Napoleon III in France in the Crimean War, which then supported him in another breakaway attempt in 1859.
After a series of campaigns his kingdom gained more territory and other Italian states were allowed to have plebiscites to join him.
By March 17, 1861, he had enough territory to be declared King of Italy, forming an Italian state for the first time since the Roman Empire.
On September 20, 1870, he entered Rome after defeating the Papal States, completing the Italian unification.
He, along with his longtime prime minister and top generals, is considered one of the fathers of Italy.
It is the latest example of tourists causing outrage through bad behaviour in Italy. Previous incidents have seen sightseers carving their initials into the walls of Rome's Colosseum, fighting over selfie spots at the city's Trevi Fountain and taking a bath in a Venice canal.
Rome has tried to crackdown on unruly tourists in the past and even considered fencing off the celebrated Spanish Steps to protect them from 'barbarian' hordes of sightseers. Last year, the city considered barring tourists from stopping next to the Trevi fountain to crack down on illegal swimming there.
In Venice, stewards patrol the city looking for signs of uncouth behaviour such as sitting down on church steps and eating. And in Milan earlier this year, visitors were banned from taking pictures with selfie sticks.
In the footage, two men - reported as being British by local media - are seen posing for photos in the fountain wearing only their briefs.
Several people position themselves by the wall, dipping their feet into the water and taking photos.
One of the men then pulls his underwear down and hides his genitals between his legs to pose naked for photos. Numerous visitors walk past the Britons as they continued to misbehave.
The landmark, designed by Giuseppe Sacconi in 1885 and completed in 1925, is between Rome's Piazza Venezia and Capitoline Hill and holds the Tomb of the Unknown Soldier which includes an eternal flame, built in memory of the fallen soldiers of World War I.
The base of the structure also houses the museum of Italian Unification. In 2007, a panoramic lift was installed, allowing visitors to ride up to the roof for 360-degree views of Rome.
Local authorities prohibit behaviour that damages or disrespects its famous landmarks and police are trying to track down the tourists.
It has also caused outrage on social media. One Italian wrote online: 'English sons of b*****s, always playing up and attention-seeking.'
Local media said that this was yet another assault on Italy's heritage.
Earlier this month, police broke up a brawl at Rome's famous Trevi fountain after two women failed to agree on who could take a selfie there first.
Both families got involved after a Dutch tourist, 19, argued with an Italian-American woman, 44, in an altercation that turned violent. The women exchanged slaps and punches before relatives reacted to create an eight-person melee.
In April last year, a nude man was filmed jumping into the same fountain for a swim in front of stunned tourists.
Weeks later, and in a bid to clamp down on illegal swimming, Mayor Virginia Raggi proposed banning tourists from stopping at the fountain, meaning they would only be able to visit the 18th century Baroque masterpiece by passing along a one-way route on one side.
A year earlier, three female tourists caused outrage in Rome after they stripped down to their bikinis and cooled off in the 400-year-old Fontana dell'Acqua Paola fountain to escape the summer heat. Locals fumed at their apparent lack of respect for the 17th century monument, after they were caught in the act. 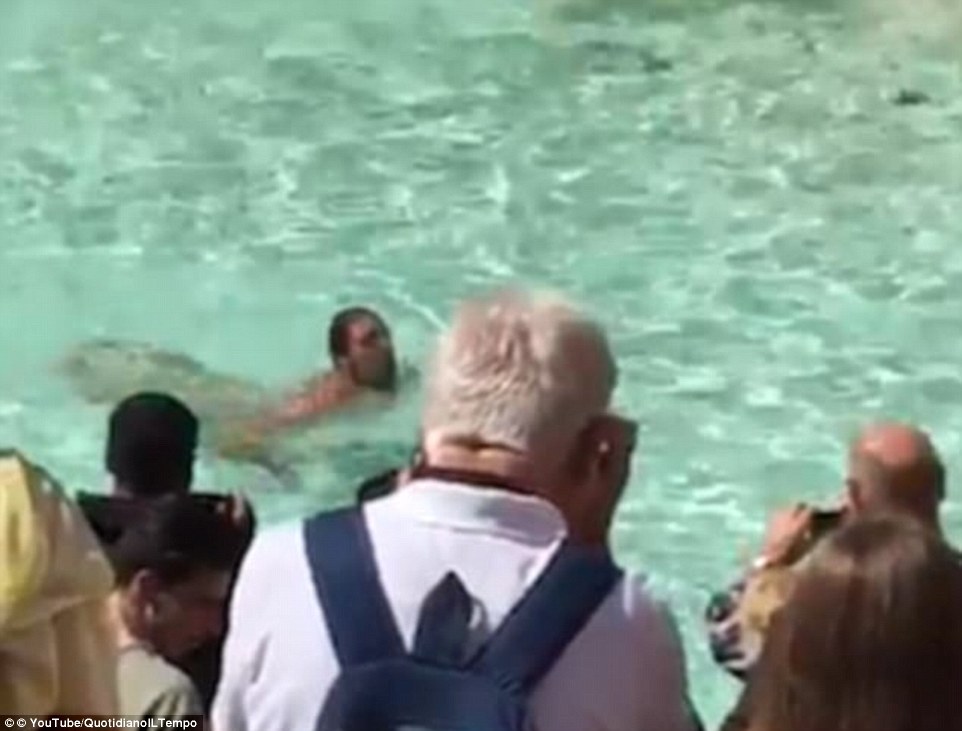 In April last year, a nude man was filmed jumping into the famous Trevi Fountain in Rome for a swim in front of stunned tourists 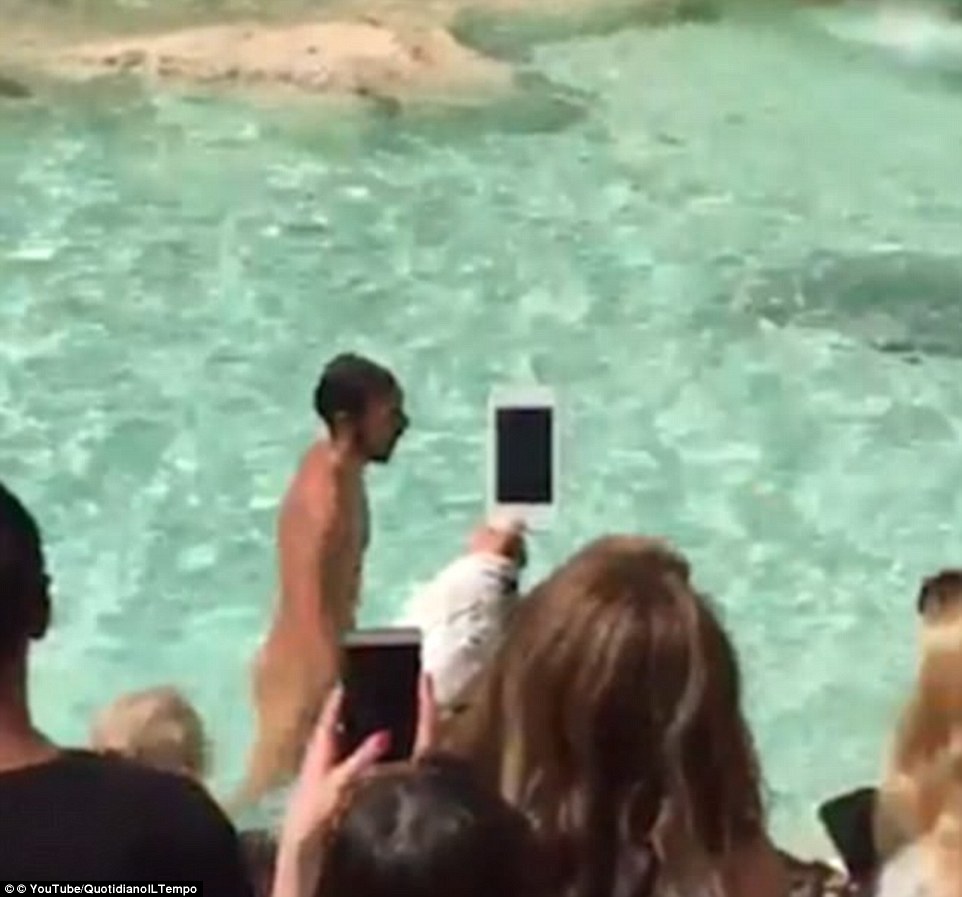 The man jumped into the celebrated Trevi Fountain to the surprise of tourists. It is illegal to jump into the fountain, throw rubbish in the water or fish out coins
Also in 2016, work had to be carried out to repair the famous Elephant and Obelisk statue in Rome, which was damaged in an apparent vandalism. The statue was commissioned by Pope Alexander VII and has stood in the square in front of the Santa Maria Sopra Minevra Basilica since 1667.
It was also reported in that year that there were proposals to fence off the Spanish Step in Rome, made famous by Audrey Hepburn and Gregory Peck.
They reopened in 2016 following an 18-month cleaning and restoration project funded by luxury jewellers Bulgari.
At the time, Paolo Bulgari, the company's chairman, called for a fence to be installed of the marble staircase so the attraction can be locked up every night, adding: 'Now that it’s been restored, we cannot allow it to revert to being an open-air sewer. We cannot leave it to the barbarians who eat and drink there, making it dirty.'
In 2015, six Britons were charged with obscenity after they were filmed skinny-dipping in the historic fountain of the Naiads in scenes described as resembling 'an orgy in Ancient Rome'.
In another act that sparked outrage in the city that year, two Californian women, aged 21 and 25, were arrested after carving a J and N into a brick wall on the first floor of the west side of the Colosseum, which is visited by more than five million people a year.
Months earlier a 42-year-old man from Russia was fined €20,000 (£14,000 or $22,000) and given a four-month suspended prison sentence after he used a stone to carve a 10-inch K into a wall at the ancient amphitheatre.
Another incident saw a 15-year-old Canadian girl trying to steal a brick from the Colosseum, which was built nearly 2,000 years ago. She removed the brick and placed it a bag in an effort to keep it as a souvenir, but was spotted by a tourist and reported to security. 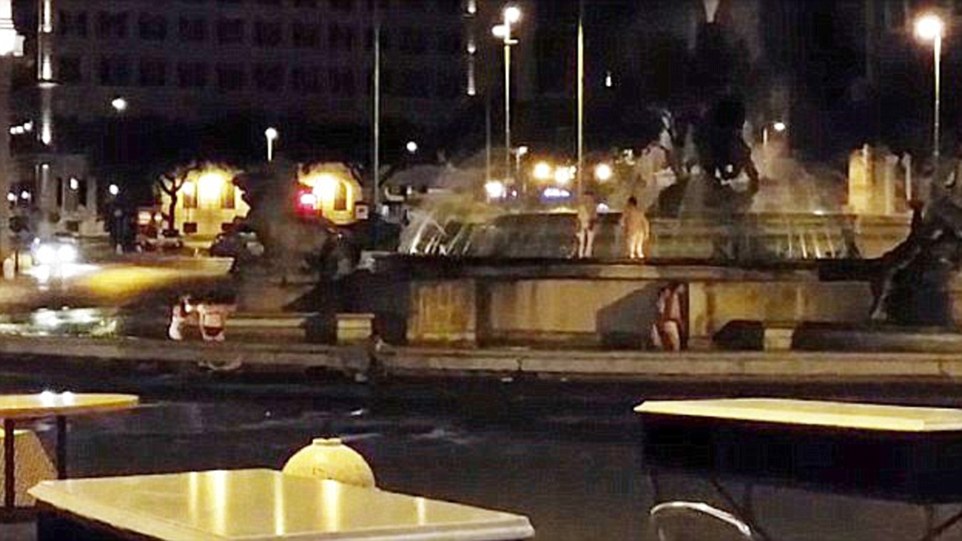 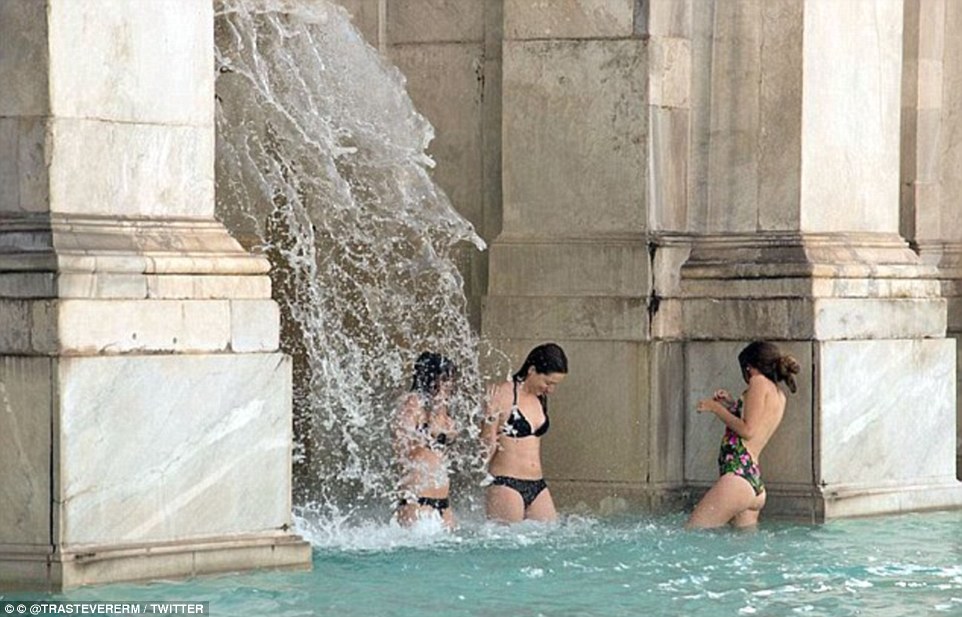 In 2016, three female tourists caused outrage in Rome after they stripped down to their bikinis and cooled off in the 400-year-old Fontana dell'Acqua Paola fountain to escape the summer heat 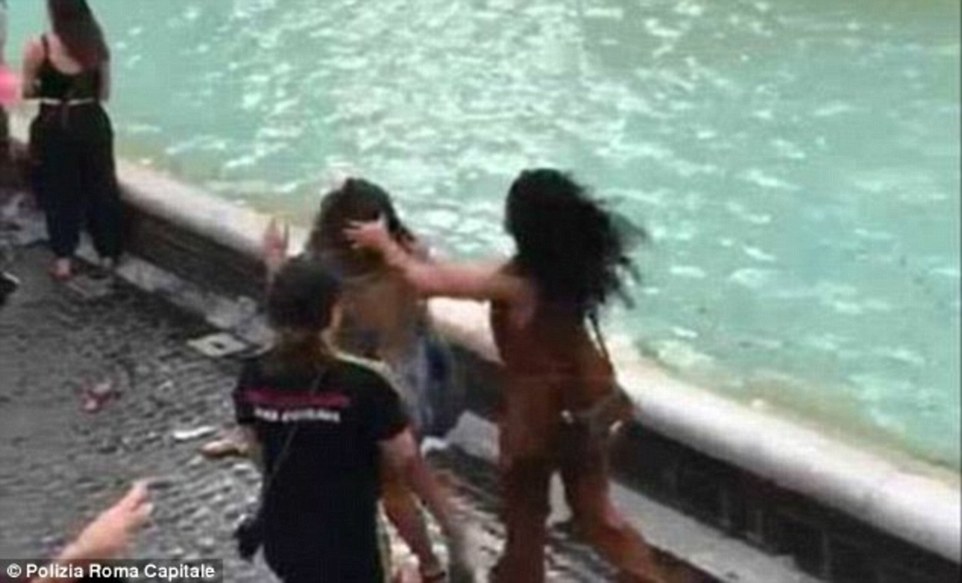 Incidents of this kind are not confined to Rome. In Venice in 2015, a tourist was spotted having a bath in one of Venice’s famed canals. Footage showed the man splashing around and using the water to clean his armpits, shoulders and back.
In 2013, an American tourist upset locals when he accidentally snapped the finger off a 600-year-old statue of the Virgin Mary at Museo dell'Opera del Duomo (Museum of the Works of the Cathedral). The 55-year-old man, from New Fairfield, Connecticut, was attempting to compare his finger to that one the statue when the digit broke off.
Earlier this year, the mayor of Capri said he was planning to mimic Venice and 'experiment' with crowd control measures to stop tourists swamping his tiny Italian island.
Gianni De Martino said last year that Capri, a popular resort since the days of the Roman Republic, 'could explode' after warning that receiving millions of visitors a year 'is a bit too much'. His comments came after Venice - which struggles to accommodate 25 million tourists a year - introduced metal barriers to funnel tourists down less popular streets so locals could still go about their business.
Other European countries have imposed rules aimed at curbing bad behaviour in popular areas.
In July, Palma, the upmarket capital of Spanish island Majorca, introduced a raft of new rules to crackdown on anti-social behaviour.
The city's council approved new laws that outlaw tourists walking around topless, which could result in fines of up to 3,000 euros (£2,600). The rules also ban pub crawls and prohibit the sale of alcohol between midnight and 8am if it is not to be consumed within a bar.
Anybody caught having sex in the street will also be fined as well as people carrying out sex acts in a place that's visible to others.