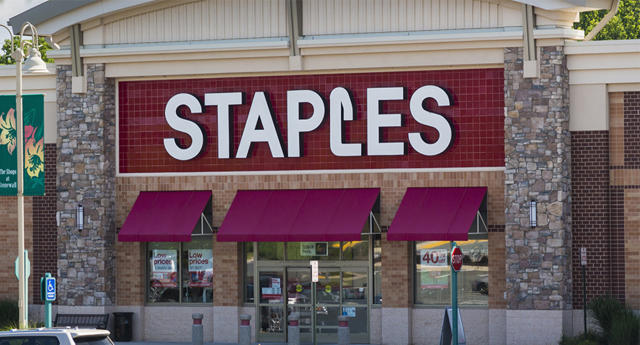 A manager at a Staples store in North Carolina has been fired after a pregnant woman shopping there was confronted about what she was concealing beneath her shirt.
Sherell Bates was paying for back-to-school supplies on Friday when the store manager, who suspected Bates was shoplifting, reported that assumption to a nearby police officer, who then asked Bates to step aside and explain what was under her shirt.
“Initially, I thought he was joking, so my response was: ‘twins,’” she told local news channel WSOC.
Bates says she explained that she’s 34 weeks pregnant with a boy and a girl, but the officer didn’t believe her.
So she lifted up her shirt to expose her belly.
“You pretty much jumped the gun without any type of evidence, except my stomach is large,” Bates said. “That’s not fair. No mom should have to go through that.”
Staples subsequently said in a statement on Monday that the manager of the Pineville, N.C., store “did not follow correct protocol” and was fired.
“On Friday at our Pineville location a Staples’ manager mistakenly assumed a customer was shoplifting and reported this assumption to a police officer visiting the store,” the statement reads.
After it was confirmed that there had been no theft, the manager apologized to Bates and refunded her transaction.
“At Staples, we want all customers to feel welcome in our stores, and work with our associates to foster an inclusive culture. As an organization, we would like to apologize to the customer as that was not the case in this instance.”
Bates told WSOC that she would like Staples employees to undergo sensitivity training to avoid similar incidents in the future.
Posted by free heip at 10:30