Trump blames D.C. pols for raining on his parade 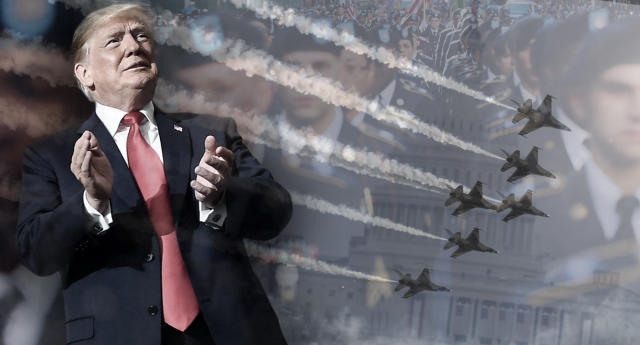 “The local politicians who run Washington, D.C. (poorly) know a windfall when they see it,” Trump tweeted. “When asked to give us a price for holding a great celebratory military parade, they wanted a number so ridiculously high that I cancelled it. Never let someone hold you up!”
Instead, the president tweeted, he will “attend the big parade already scheduled at Andrews Air Force Base on a different date” as well as an Armistice Day parade in Paris on Nov. 11 celebrating 100 years since the end of World War I.
“Maybe we will do something next year in D.C. when the cost comes WAY DOWN,” Trump added. “Now we can buy some more jet fighters!”
The projected cost of an F-35 fighter plane for delivery in 2020 is around $90 million.
There was no immediate explanation for why the president thought it would be less expensive to hold the parade next year.
Washington, D.C., Mayor Muriel Bowser responded in a tweet saying she was “the local politician who finally got thru to the reality star in the White House with the realities ($21.6M) of parades/events/demonstrations in Trump America (sad).”
On Thursday, the Pentagon announced the postponement of the parade, which had originally been scheduled for Nov. 10, until 2019. Hours before the announcement, CNBC reported that the cost of the parade was $92 million — or $80 million more than an initial estimate. According to the report, the $92 million cost estimate included “security, transportation of parade assets, aircraft, as well as temporary duty for troops.” CNN reported that half the updated estimated cost would have been for nonmilitary expenses like security.
In January, Trump asked the top defense officials to begin planning a parade similar to last year’s Bastille Day celebration in Paris, which Trump attended as a guest of French President Emmanuel Macron.
According to the Washington Post, Trump was “awestruck by the tableau of uniformed French troops marching down Avenue des Champs-Elysees with military tanks, armored vehicles, gun trucks and carriers — complete with fighter jets flying over the Arc de Triomphe and painting the sky with streaks of blue, white and red smoke for the colors of the French flag.”
“It was one of the greatest parades I’ve ever seen,” Trump told reporters at the United Nations General Assembly in September. “It was two hours on the button, and it was military might, and I think a tremendous thing for France and for the spirit of France. We’re going to have to try to top it.”
Trump has long mused about organizing a similar spectacle in the United States.
Days before his inauguration, Trump told the Post that “being a great president has to do with a lot of things, but one of them is being a great cheerleader for the country, and we’re going to show the people as we build up our military, we’re going to display our military.”
“That military may come marching down Pennsylvania Avenue,” he added. “That military may be flying over New York City and Washington, D.C., for parades. I mean, we’re going to be showing our military.”
Posted by free heip at 08:33