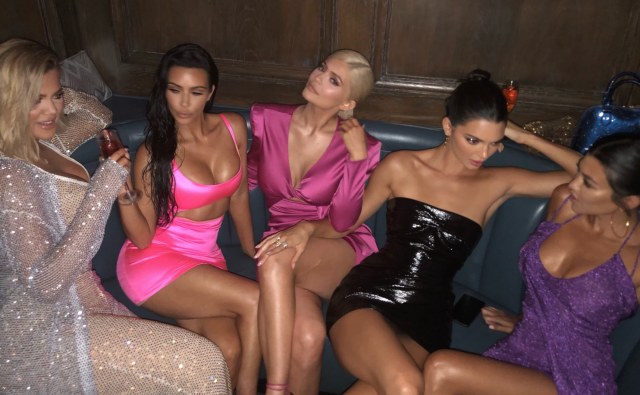 Kanye West dropped a new song called “XTCY” early Saturday morning, and it’s definitely a headphones-only (if you’re in public) listen. DJ Clark Kent tweeted a link to the track: “Sitting in the studio with my man [Kanye West] and he said.. ‘Clark, let that new “XTCY”joint go!!!’” West retweeted the link soon afterward.
It looks like the artwork for West’s new track is a picture of his wife Kim Kardashian with her sisters, which is fitting considering the song boasts lyrics like “You got sick thoughts? I got more of ’em/ You got a sister-in-law you would smash? I got four of ’em.”
He also seems to confess to enjoying photos of his sisters-in-law, rapping, “Damn, those is your sisters/ You did something unholy to them pictures.”
Wow. Wow. That will make the next family cookout interesting. Of course, people on Twitter had some thoughts.
One astute observer noted that Kanye West, a 41-year-old man, is rapping about wanting to have sex with Kylie and Kendall Jenner,  who are 21 and 22 years old, respectively, and his relatives by marriage.Another seconded the Trump angle (our president’s most recent wives have been much younger than him), and reminded us that Taylor Swift has known.
West is capping off another wild week that included a visit Jimmy Kimmel Live! where he continued to defend his support for President Donald Trump. West famously announced his support for Trump by tweeting a photo of himself wearing a “Make America Great Again” hat.
Kimmel also asked West a pointed question, “You so famously and so powerfully said, ‘George Bush doesn’t care about black people.’ It makes me wonder what makes you think that Donald Trump does, or any people at all?”
West did not respond to Kimmel’s question.
The hip-hop star also offered a telling insight into how he feels about women and sex on the show.
“Do you feel like your attitude toward women has changed since having daughters?” Kimmel asked, to which West replied, “Nah, I still look at Pornhub.”
Posted by free heip at 09:22