Andrew Gillum, Florida’s Democratic nominee for governor, on Sunday condemned attempts to “weaponize race” days after Florida voters began receiving robocalls mocking his African-American heritage.
The Tallahassee mayor blasted the automated phone calls as “deeply regrettable” during an interview Sunday on CNN’s “State of the Union.” Though the recordings were produced by an Idaho-based neo-Nazi group, Gillum called on his Republican opponent, Rep. Ron DeSantis (R-Fla.), to “rise above” adopting its ugly tactics.
“We can have a challenge between ideas and around what we think the people of the state of Florida deserve,” Gillum said Sunday. “What I don’t want this race to turn into is a race of name-calling.”
“I want to make sure that we don’t racialize, and frankly, weaponize race as a part of this process,” he said. “People are taking their cues from [DeSantis], his campaign and from Donald Trump. And we saw in Charlottesville that that can lead to real, frankly, dangerous outcomes.” 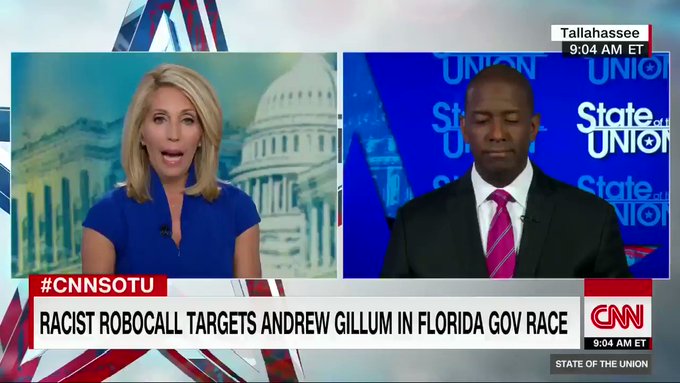 "I want to make sure that we don't racialize, and, frankly, weaponize, race as a part of this process," says Florida governor candidate Andrew Gillum, after he is targeted by racist robocalls http://cnn.it/2PVdxYV  #CNNSOTU

Twitter Ads info and privacy
In the automated phone calls, someone speaking in an exaggerated dialect pretends to be Gillum, Florida’s first African-American nominee for governor, as drums and jungle noises can be heard in the background. A spokesman for DeSantis on Friday denounced the robocalls, calling them “absolutely appalling and disgusting.”
But two days earlier, DeSantis, who is white, faced backlash himself over his apparently racist remarks about Gillum.
“The last thing we need to do is to monkey this up by trying to embrace a socialist agenda with huge tax increases and bankrupting the state,” DeSantis told Fox News on Wednesday.
Stephen Lawson, communications director for DeSantis’ campaign, said that the comments were about the economy. “To characterize it as anything else is absurd,” he said in a statement Wednesday.
Gillum hasn’t said whether he believes DeSantis is “a racist,” but during an appearance earlier Sunday on NBC’s “Meet The Press,” he called on his opponent to “tone down” his rhetoric.
“I think what’s important is that Mr. DeSantis and obviously the president really try to go high on this thing,” Gillum told NBC. “We cannot afford to weaponize race and to go to the bottom of the barrel here. ... I’m pleased to see them decry those robocalls, but it’s also important that Ron DeSantis take control and ownership of his own rhetoric and words.” 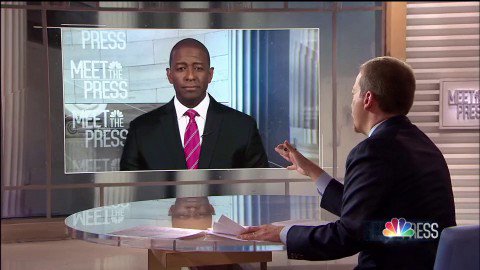 WATCH: Andrew Gillum calls on Rep. DeSantis to stand against racist attacks in Florida Governor's race. #MTP@andrewgillum: "I have not called [Rep. DeSantis] a racist" but "his rhetoric, in my opinion, has to be toned down"