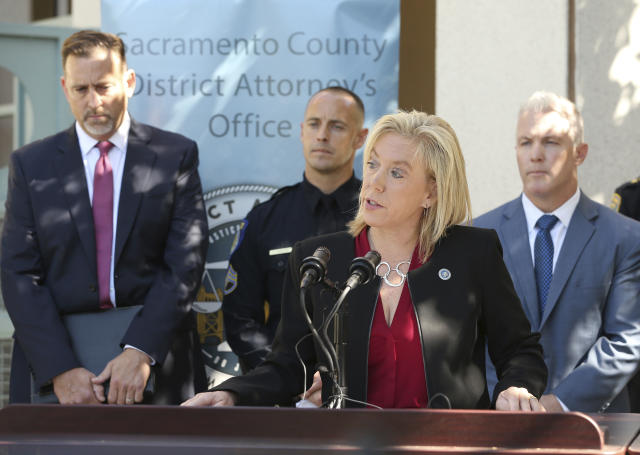 SACRAMENTO, Calif. (AP) — A married 58-year-old man has been arrested in connection with at least 10 rapes across Northern California between 1991 and 2006 in what's known as the NorCal Rapist case, Sacramento police announced Friday.
Roy Charles Waller of Benicia was arrested without incident at the University of California in Berkeley, where he worked for 25 years as a safety specialist in the office of environment, health and safety.
District Attorney Anne Marie Schubert said her office used DNA and genealogy websites to zero in on Waller.
His arrest comes five months after police used the same tactic to arrest 72-year-old former police officer Joseph DeAngelo in the Golden State Killer case, which is connected to at least a dozen rapes and killings throughout the state in the 1970s and 1980s.
"DNA is the silent witness to the truth," Schubert said at a news conference announcing Waller's arrest.
Waller is suspected of raping women in six Northern California counties, from Sacramento to Chico.
He's scheduled to be arraigned Monday in Sacramento Superior Court. It's unclear if he has an attorney.
Detective Avis Beery, who worked the case for 12 years, said she has been "waiting a really long time for this day to come."
"I never gave up hope," she said, adding that she called one of the victims of the NorCal Rapist on Friday morning to tell her the news.
"She was overcome and over the top with emotion and happiness to see that this person is in custody and that no one else has to worry about him anymore," Beery said. "The victims in this case can stop looking over their shoulders."
She described the NorCal Rapist's modus operandi, saying that he typically would break into houses late at night, often when women were asleep.
"He would overcome them, he would bind them, and then repeatedly sexually assault them," she said.
Sometimes he would kidnap the women and force them to withdrawal money from ATMs, and sometimes stole their personal items.
Sacramento Police Chief Daniel Hahn called the crimes "horrific," saying the victims were terrorized for hours at a time.
"There's one less dangerous predator on our streets," he said.
Posted by free heip at 09:14