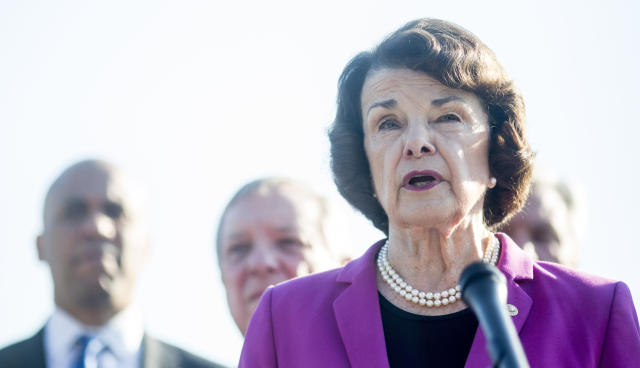 WASHINGTON ― Sen. Dianne Feinstein (D-Calif.) acknowledged Thursday that she has a document concerning Supreme Court nominee Brett Kavanaugh that she has so far refused to share, despite behind-the-scenes requests to do so from her fellow Democrats on the Senate judiciary committee.
“I have received information from an individual concerning the nomination of Brett Kavanaugh to the Supreme Court,” Feinstein said in a statement. “That individual strongly requested confidentiality, declined to come forward or press the matter further, and I have honored that decision. I have, however, referred the matter to federal investigative authorities.”
The California Democrat, who is the senior minority member on the committee, had thus far refused to answer questions about the document, which was first reported by The Intercept.
Multiple sources have told HuffPost that the document in question is a letter sent to Rep. Anna Eshoo (D-Calif.) that concerns potential sexual misconduct involving Kavanaugh and a woman when they were both in high school. Eshoo’s office has also declined to comment, saying the letter was considered casework ― and thus wouldn’t be made public ― since it came from a constituent.
The White House took issue with Feinstein’s announcement Thursday, saying that she never brought up this matter when she met with him or at his hearings.
“Not until the eve of his confirmation has Sen. Feinstein or anyone raised the specter of new ‘information’ about him,” White House spokeswoman Kerri Kupec said, blaming Senate Minority Leader Chuck Schumer (D-N.Y.) for an “11th hour attempt to delay” Kavanaugh’s confirmation.
“Throughout 25 years of public service, the Federal Bureau of Investigation has thoroughly and repeatedly vetted Judge Kavanaugh, dating back to 1993, for some of the most highly sensitive roles,” Kupec said. “He has served in the Office of Independent Counsel, the White House, and on the D.C. Circuit Court of Appeals, all before his nomination earlier this year to serve as Associate Justice on the Supreme Court.”
Sen. Chuck Grassley (R-Iowa), who chairs the judiciary committee, said Thursday he was aware of the matter, but declined to comment because he had not seen the document in question.
“All I know is what I read, and I wouldn’t make any judgment of it until I get more information,” Grassley told reporters outside a Senate judiciary committee hearing concerning Kavanaugh’s nomination.
Sen. Susan Collins (R-Maine), who is considered one of the few GOP members who may vote against Kavanaugh, refused to comment on the new revelations because she hasn’t seen the letter in question. Collins is also scheduled to speak with Kavanaugh on the phone Friday to follow-up on other, unrelated questions.
Sen. Dick Durbin (D-Ill.) told BuzzFeed Thursday that the matter had been referred to the FBI. The FBI did not immediately respond to a request for comment.
A lawyer who is reportedly representing the woman was spotted leaving the U.S. Capitol on Wednesday evening shortly after the Intercept report was published. The lawyer, Debra Katz, has not responded to HuffPost’s requests for comment.
The document is only the latest to create controversy amid the battle over Kavanaugh’s nomination, which is expected to receive a favorable vote in committee on Sept. 20. Republicans on Thursday voted down several attempts by Democrats to subpoena hundreds of thousands of documents that have been deemed privileged and unavailable to the public, including those related to Kavanaugh’s work as a key administration official for former President George W. Bush.
Posted by free heip at 12:03