Family of four dies in road accident during torrential downpour, one son survives 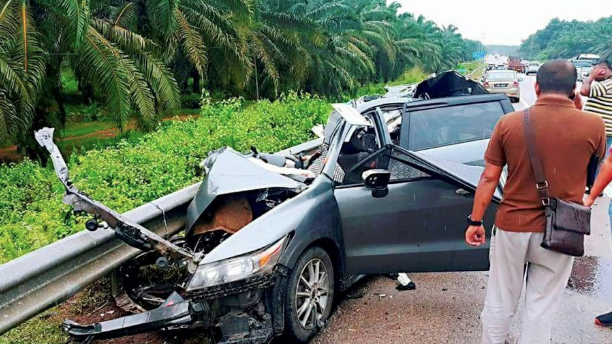 Driving towards Segamat, Johor, a family of four, consisting of a husband and wife, along with two of their two children, were killed in a horrific road accident over the weekend.
Authorities believe that a trailer coming in the opposite direction, in heavy rain, skidded while approaching the family’s Honda Stream, and collided with their car head-on, Saturday afternoon.
Fifty-one-year-old Nizam Othman, along with his wife, 37-year-old Nur Fazlin Jamalluddin, and their two young children, aged seven and two, died upon impact. Only their nine-year-old son survived the accident, after he was flung from the vehicle — a consequence of the impact that would counter-intuitively save his life.
Police confirmed that the trailer driver also survived the accident.
Fire and Rescue were able to remove the victims from the tangle of steel within 90 minutes of having arrived at the scene.
Truly tragic, and especially sad for the young survivor to have lost his family. Stay safe people.

The post Family of four dies in road accident during torrential downpour, one son survives appeared first on Coconuts.
Posted by free heip at 08:53