'He's too young for her!': Priyanka Chopra and fiancé Nick Jonas are being trolled for 10-year age gap

The age gap between the newly engaged Nick Jonas and Priyanka Chopra narrowed over the weekend, as the singer celebrated his 26th birthday on Sept. 16. And yet, trolls are coming out in full force to taunt the 36-year-old Chopra for being (shock! horror!) older than her man. 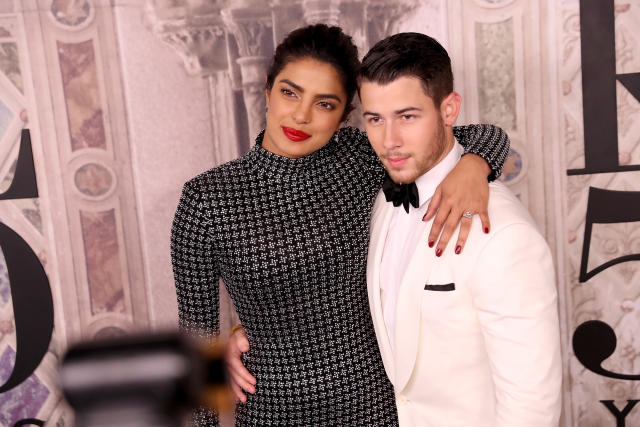 The couple celebrated Jonas’s special day with a trip to Arlington, Texas, to watch the Dallas Cowboys defeat the New York Giants. Chopra shared a romantic mid-smooch snapshot from the outing, lovingly calling her fiancé her “baby.”
The “baby” reference was all some critics needed to mock their relationship.
“He is her baby,” complained a follower who insisted that Jonas is “too young for her.”
“Quite literally a baby,” read another comment, while one dubbed them a “little kid and [his] stepmother.” One troll even accused Chopra, who has Indian citizenship and a visato live and work in the U.S., of “seducing” Jonas and “ruining his young life” just to get a green card.
“Is this your son?” added another commenter.
The age jokes didn’t go over well with Chopra’s loyal fans, who accused critics of being “jealous.” Her supporters also said it was a double standard to shame Chopra for being a decade older when it’s quite common for men to date younger women without raising an eyebrow. (Just this weekend, for instance, 69-year-old actor Richard Gere revealed that he and his 35-year-old wife, Alejandra Silva, are expecting a child together. Closer to home, little has been made of Jonas’s brother Joe being seven years older than his fiancée, actress Sophie Turner.)“Hate seeing all these comments disrespecting their relationships and being horrible to them just because she is older than him,” a fan wrote in the couple’s defense. “If he was the one older than her then no one would say a thing but just because the woman is older you can’t stop the hate. Let them live their lives how they want and stop being so nosy.”
“Nick is 26; he’s not a child,” pointed out another fan.
“Age doesn’t matter,” added another commenter.
All that matters, really, is what Chopra and Jonas think — and that smooch pretty much says it all.
Posted by free heip at 09:15