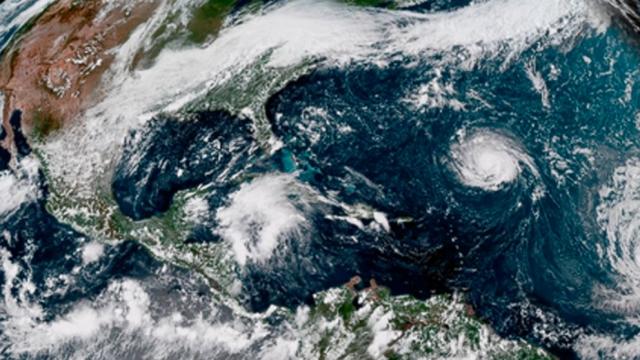 Mandatory evacuation orders issued in North Carolina as Hurricane Florence approachesoriginally appeared on abcnews.go.com
As Hurricane Florence nears the East Coast, officials in North Carolina have issued mandatory evacuation orders.
Florence strengthened to a major Category 3 hurricane Monday morning and governors of several Southeast states have urged residents to prepare.
Florence could even get close to Category 5 status, with wind speeds near 150 mph.
The storm will likely make landfall Thursday night near the Carolinas, possibly as a Category 4 storm. 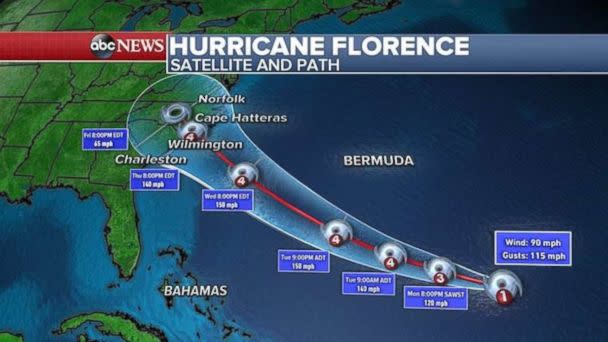 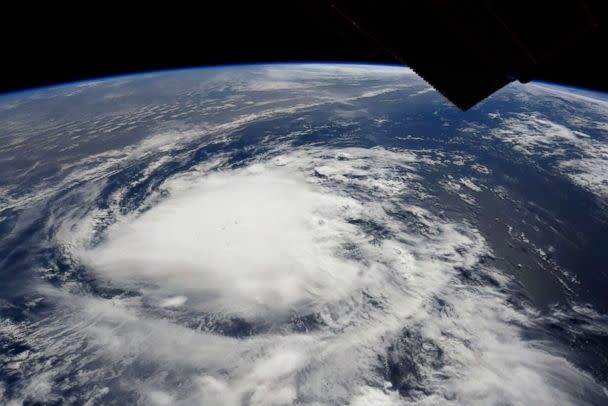 Besides devastating storm surge and powerful winds, catastrophic flooding is possible from Virginia to the Carolinas.

Virginia, North Carolina and South Carolina have all declared states of emergency ahead of Florence's arrival.
"We are preparing for the worst but hoping for the best," South Carolina Gov. Henry McMaster said at a news conference Saturday."I encourage Virginians to monitor forecasts and make their own preparations now," Virginia Gov. Ralph Northam said in a statement.
(MORE: 2018 Atlantic hurricane season is now underway: What experts say is in store)
North Carolina Gov. Ray Cooper added, "Everyone in North Carolina needs to keep a close eye on Florence and take steps now to get ready for impacts later this week."
An evacuation order for visitors and residents on North Carolina's Hatteras Island goes into effect Monday while those in other parts of Dare County will be under an evacuation order beginning Tuesday.Hurricane Isaac is moving toward the eastern Caribbean.
It is expected to approach the Lesser Antilles on Thursday and possibly pass over Dominica as a weak hurricane or tropical storm. 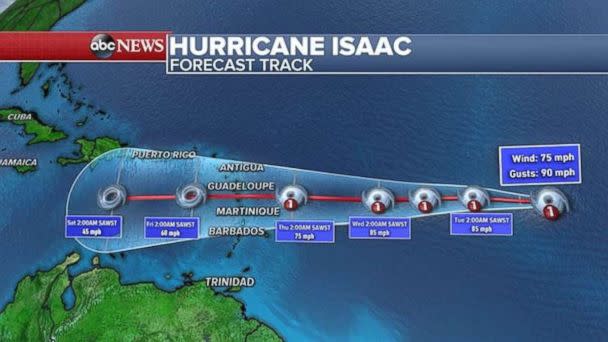 (MORE: Preparing for an approaching hurricane and other things you need to know about them)
In the eastern Pacific Ocean, forecasters are keeping a close watch on Tropical Storm Paul and Hurricane Olivia. Paul is not expected to make landfall but Olivia could threaten Hawaii.
Olivia, now a Category 1 hurricane with sustained winds of 85 mph, is forecast to weaken as it heads toward the Hawaii. 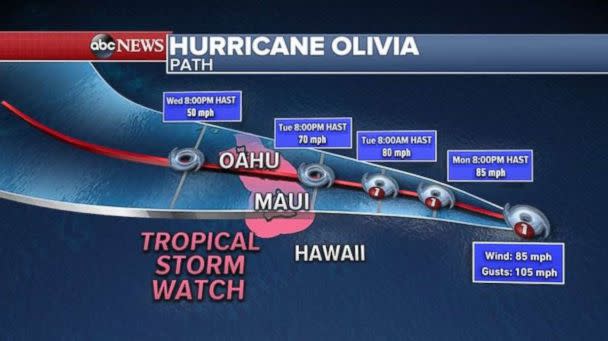 Olivia is forecast to pass over the islands Tuesday night into Wednesday morning local time as a tropical storm.