"This is not normal. These are extraordinary times." 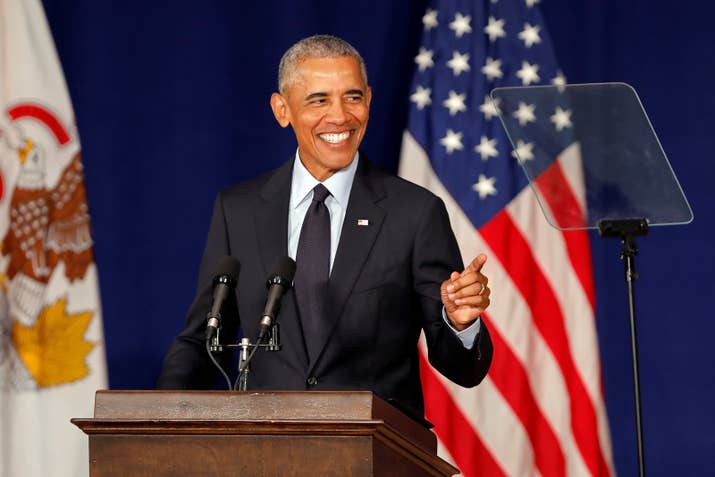 Former president Barack Obama on Friday delivered a searing and direct criticism of President Donald Trump, the first time he's done so since he left the White House in 2017.
It also seemed to be the first time Obama criticized Trump by name in his post-presidency. He blasted Trump for his failure to denounce Nazis in Charlottesville, Virginia, last year, for his stoking baseless conspiracy theories, and for the “crazy stuff that's coming out of this White House.”
He also noted that it was his policies that have ushered in the robust economy Trump currently claims as his greatest achievement.
Obama’s speech — at the University of Illinois at Urbana-Champaign, where he was receiving an ethics award — was touted as his first foray into the 2018 election cycle. He also took aim at the Republican Party’s seemingly unwavering support of Trump despite deep misgivings.
Obama's remarks were aimed at encouraging young people to vote in the midterm elections. He said, “In the last midterm elections in 2014, fewer than one in five young people voted. One in five. Not two in five or three. One in five. Is it any wonder this Congress doesn't reflect your values and your priorities?"
“The claim that everything will turn out okay because there are people inside the White House who secretly aren't following the president's orders — that is not a check,” he said, referring to the anonymous op-ed in the New York Times that was published this week.
“They're not doing us a service by actively promoting 90% of the crazy stuff that's coming out of this White House, and then saying, 'Don't worry, we're preventing the other 10%.' That's not how things are supposed to work. This is not normal. These are extraordinary times,” he said.
Posted by free heip at 11:42