Calling for greater international action on climate change, Samoa’s long-serving prime minister minced no words in a recent speech lambasting world leaders who don’t believe global warming is occurring— saying such skeptics are “utterly stupid” and should be taken to a mental institution.
Tuilaepa Sailele delivered his no-holds-barred address at the Lowy Institute, a think-tank in Sydney, Australia, on Thursday. He called on Australia’s leaders to do more to reduce their carbon footprint and singled out the United States, India and China — the world’s three largest carbon dioxide emitters — as the countries most responsible for “all this disaster,” The Guardian reported.
“Any leader of those countries who believes that there is no climate change, I think he ought to be taken to mental confinement. He is utterly stupid,” said Sailele, who has served as Samoa’s prime minister since 1998. “I say the same thing for any leader here who says there is no climate change.”
U.S. President Donald Trump in the past termed climate change a “hoax,” and also as a Chinese invention. Trump provoked global condemnation last year when he chose to withdraw the United States from the landmark Paris climate agreement.
In Australia, Scott Morrison, the newly elected prime minister, has been facing pressure by some lawmakers to abandon the country’s Paris agreement pledges, local outlet ABC News noted. 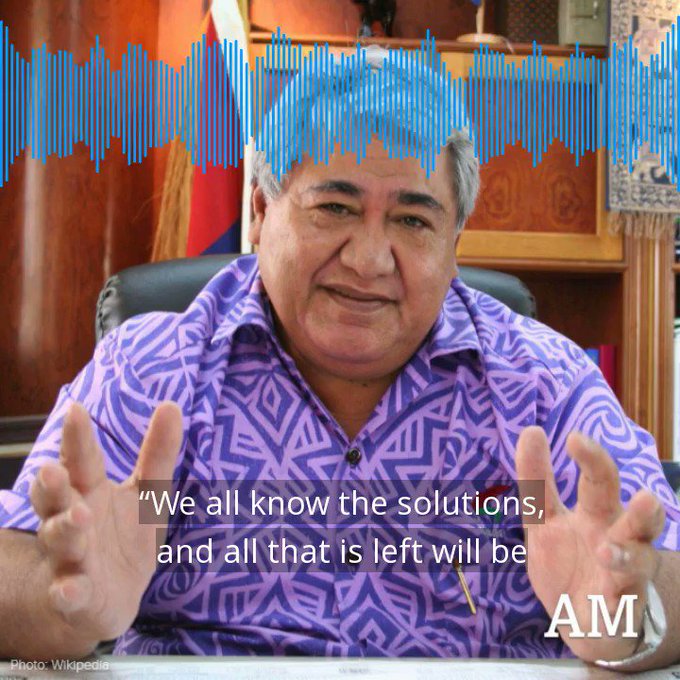 Twitter Ads info and privacy
Sailele said in his speech that climate change is the “single greatest threat to the livelihood, security and well-being” of peoples of the Pacific.
Samoa and other Pacific islands are already feeling the effects of global warming, he noted. Several smaller islands in the region have been swallowed up in recent years because of rising sea levels.
“While climate change may be considered a slow onset threat by some in our region, its adverse impacts are already felt by our Pacific islands peoples and communities,” Sailele said. “Pacific island countries continue to urge faster action [to reduce global warming] by all countries.”
The Samoan leader said “political guts” will be needed to address the critical global issue.
“We all know the problem, we all know the solutions, and all that is left would be some political courage, some political guts, to tell people of your country there is a certainty of disaster,” Sailele said.
Posted by free heip at 21:23