Kavanaugh has denied the allegations. The letter, which Sen. Dianne Feinstein had kept from committee members, was referred to the FBI on Thursday. 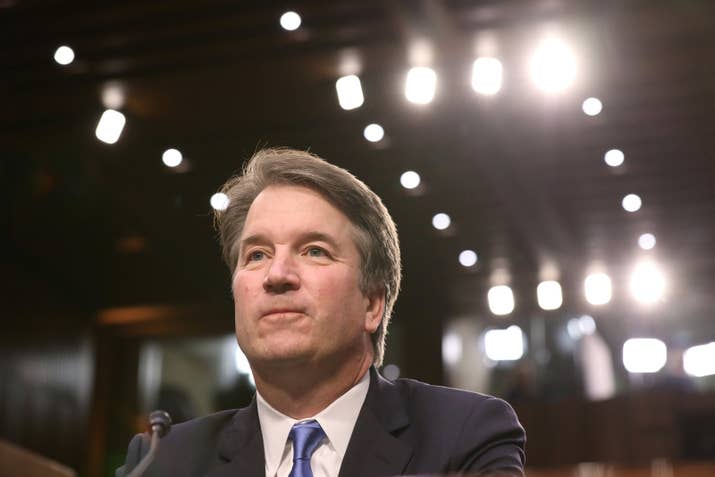 WASHINGTON — A secret letter about Brett Kavanaugh that Senate Judiciary Committee Democrats referred to the FBI reportedly contains allegations of sexual misconduct when the Supreme Court nominee was a minor in high school.
On Friday, the New Yorker reported a woman alleged in the letter that Kavanaugh held her down and attempted to force himself on her at a party in the early 1980s, when both of them were in high school. The publication reported the allegations are that Kavanaugh and one of his classmates had been drinking and turned up the music so the woman’s protests could not be heard.
The woman was reportedly able to free herself but later sought psychological treatment because of the incident.
Kavanaugh in a statement denied the allegations.
“I categorically and unequivocally deny this allegation. I did not do this back in high school or at any time,” he said in a statement sent to BuzzFeed News.
The woman reportedly approached California Rep. Anna Eshoo and California Sen. Dianne Feinstein with the allegations over the summer, after Kavanaugh was nominated to the Supreme Court by President Donald Trump. The New Yorker reported that the woman decided not to move forward with her allegations when it became increasingly likely Kavanaugh would be confirmed for the Supreme Court seat.
Last week, BuzzFeed News contacted the woman who is believed to be the subject of the letter at her home. She declined to comment.
Shortly after the New Yorker published its report, Sen. Chuck Grassley, the head of the Judiciary Committee, released a letter from 65 women who say they knew Kavanaugh in high school. “For the entire time we have known Brett Kavanaugh, he has behaved honorably and treated women with respect,” they wrote.
Grassley's office released a statement later Friday saying, "the committee vote on Judge Kavanaugh's nomination will proceed as scheduled, next Thursday." His office added that the "anonymous allegations are reportedly from Judge Kavanaugh’s high school time roughly 35 years ago" and that no similar allegations came up during previous FBI background checks into Kavanaugh or during the conversations around his nomination in the Judiciary Committee.
In recent weeks, the letter containing the woman’s allegations against Kavanaugh has taken a winding path from secret document to the subject of whispers to the talk of Capitol Hill and part of an FBI file.
Feinstein and Eshoo had kept the letter closely guarded, and in recent days other Democrats on the Senate Judiciary Committee told BuzzFeed News they had not seen it.
But rumors increasingly swirled around the Capitol and on Wednesday The Intercept published a story about a possible letter in Feinstein’s possession that outlined an incident between Kavanaugh and a woman many years ago.
That evening, Judiciary Committee Democrats huddled in the Senate lobby. Debra Katz, a lawyer who is believed to be representing the woman in the letter, was also spotted on Capitol Hill at the time of the meeting, but declined to comment to BuzzFeed News.
On Thursday, as buzz about the story surged, BuzzFeed News reported that Feinstein was referring the letter to the FBI. Her office confirmed this in an official statement shortly afterward. She also explained her reasoning for keeping the letter secret: “That individual strongly requested confidentiality, declined to come forward or press the matter further, and I have honored that decision. I have, however, referred the matter to federal investigative authorities,” Feinstein said.
The FBI then added “information” on the letter as an addendum to Kavanaugh’s background file, a confidential physical document kept under lock and key that can only be viewed by senators and certain Senate and White House staff. Because Kavanaugh is a Supreme Court nominee, all senators — not just those on the Judiciary Committee — have access to his background file.
At this point, the number of people who had access to information on the letter multiplied exponentially. While Eshoo and Feinstein had been the only known people to have read the letter, 100 senators plus the White House have access to the information in Kavanaugh’s background file.
There is no criminal investigation into the letter, a source said.
Posted by free heip at 11:37