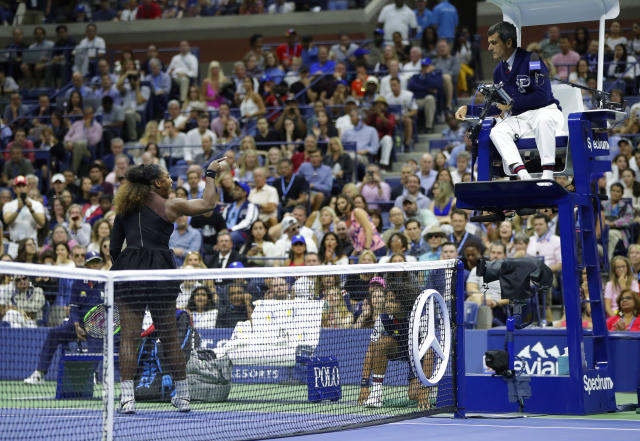 Serena Williams wasn’t done talking about her U.S. Open outburst.
After losing to Naomi Osaka 6-2, 6-4 in the championship match, Williams was in the press room ready to answer questions about the violations, the penalties and what she believed was inequality.
Williams was docked a point and later a game for three code of conduct violations.
The first was for receiving illegal on-court coaching from her coach Patrick Mouratoglou. She denied the violation, saying to chair umpire Carlos Ramos that she’d rather lose than cheat. She also told Ramos, who she later called a good umpire, that her team had no coaching signals and had never talked about doing so during a match.
Mouratoglou, however, admitted to ESPN’s Pam Shriver after the match that he was indeed coaching Williams from the box – a surprise to the 23-time major champion.
“What is he talking about? Because we don’t have signals. We have never discussed signals. I don’t even call for on-court coaching,” Williams said. “I want to clarify myself what he’s talking about.”
Her biggest issue, besides needing to clarify with Mouratoglou what he meant and why he said he was coaching her without her being aware, was with the sexism of the game penalty.
Williams had just received a point penalty for smashing her racket – her second conduct violation.
She didn’t agree with Ramos’ decision and during the changeover, she made sure he was aware of it.
Sitting in her chair, she demanded an apology from the long time umpire. She believed that he had mistakenly labeled her a cheater by issuing the on-court coaching violation and wanted him to apologize for that. When he didn’t she called him a thief for taking a point away from her.
She continued arguing with him which led to a third violation – this one would result in the game penalty.
Williams argued with the U.S. Open officials and later told reporters that the penalty was unfair and given to her because she is a woman.
She believed that her male counterparts frequently harassed the chair umpires without ramifications and because she is a woman, she received a harsher penalty.
“He never took a game from a man because he said ‘thief,'” Williams said. “For me it blows my mind, but I’m going to continue to fight for women. The fact that I have to go through this is just an example for the next person.”She finished by saying that she wants other strong women to be able to express their emotions in the future and that even though it didn’t work for her today, it would for someone else in the future.
Williams then left the press room like she did Arthur Ashe stadium: to applause.
Posted by free heip at 10:24