Sue Ghizdeanu needed an emergency operation and five stitches in her hand
She will require further hospital check-ups after she was bitten on Tuesday
The 52-year-old said the owner hasn't apologised after the attack in Goole, Yorks
Have you been a victim of a dog attack? Email leigh.mcmanus@mailonline.co.uk

This shocking video shows a Staffordshire Bull Terrier latch on to a woman's arm as she tries to protect her dog from being attacked.
The CCTV footage shows the attacking dog hurtle towards the woman as she walks her own dog, which looks like a similar breed.
Terrified Sue Ghizdeanu had to undergo an emergency operation, needed five stitches to her hand, and will require further hospital check-ups after she was bitten by the dog, which was off its lead on Tuesday in Goole, near York.
Initially the Bull Terrier is locked in a battle with Sue's dog Tyson, but turns its attention to her as she tries to separate the warring dogs.
Sues struggles with the two dogs before a man runs up, ripping the dogs from one another's grasp.
Recalling the attack, which happened in Goole, Sue said: 'We got to near the Chinese takeaway and the dog just came charging up to me.'
She added that when she tried to stop the dogs fighting, she ended up with her hand in the Bull Terrier's mouth.
It is the attacking dog's owner who can then be seen running up to Miss Ghizdeanu to control the Staffordshire Bull Terrier. 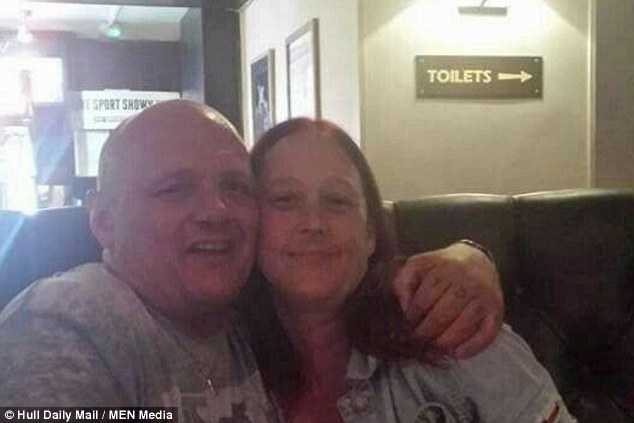 Sue said she still hasn't heard anything from the dog's owner who didn't apologise at the time
'He managed to split the dogs up,' the 52-year-old said.
'He then got his partner to get a bowl of water to wash his dog's face as there was a lot of blood from my hand.
'He didn't apologise, though. I was disgusted.'
An ambulance was called to the scene and Miss Ghizdeanu was taken to Scunthorpe General Hospital, before being transferred to Hull Royal Infirmary for her operation. The 52-year-old had to stay overnight.
Miss Ghizdeanu says she still hasn't heard anything from the dog's owner.To be honest, if that was me and it was my dog that had bitten someone, I would have had it put down,' she said.
A neighbour who witnessed the attack has since reported it to Humberside Police.
Miss Ghizdeanu says the attack has left her feeling wary and afraid.
She said: 'I won't be changing the route I walk Tyson, but I am really wary now when I go out.'
Mr Beal added: 'I have been checking all the alleyways to make sure it is okay for her to walk Tyson.'
Posted by free heip at 12:01