Swords into plowshares: Incredible images show the wave of hope that swept Europe as life returned to normal when the guns of WWI finally fell silent

Rarely seen photographs showing the aftermath of the First World War are going on display as part of an exhibition on the fallout of the conflict and the wave of hope that swept Europe.
The stunning collection of 130 images were taken in the months following the signing of the Armistice between Germany and the Allies on November 11 1918.
Four years of conflict had claimed around 17 million lives with 10million military personnel dying on the battlefield in some of the bloodiest battles the world had ever seen.
Soldiers' lives were never the same again. Many still suffered from shell shock or were disabled. It was difficult for them to forget about the horrors of the war. 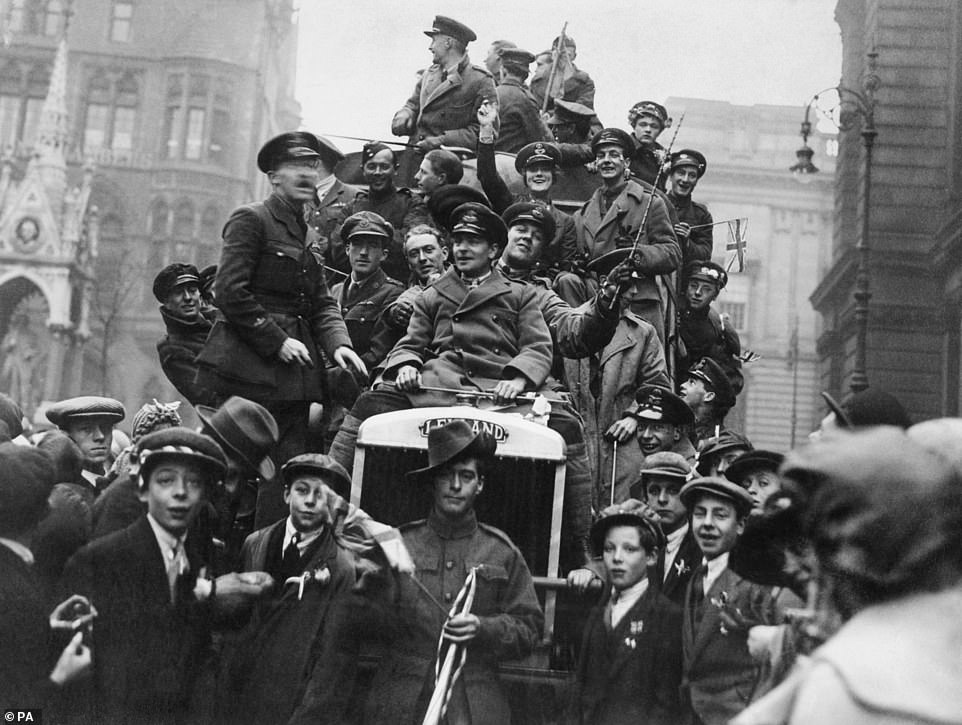 Armistice Day celebrations in Birmingham in 1918. Millions took to the streets across the country to mark the moment peace was finally signed on November 11, a date that is still marked to this day for remembrance celebrations. The image of soliders and young men sitting on top of a Leyland truck is one of 130 rarely seen photographs showing the aftermath of the First World War 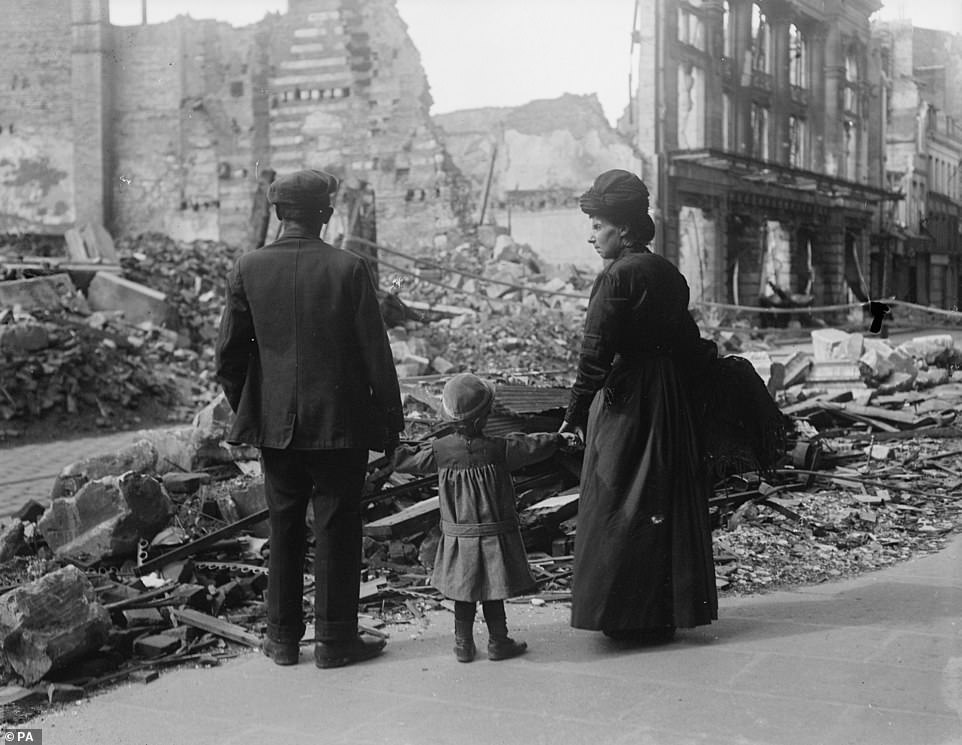 The conflict left huge swathes of the Europe in ruins, as many countries struggled to repair the damage, as they were left in huge debt from years of fighting. Here, a refugee family returning to the devastated city of Amiens in France, looking at the obliterated remains of a house on September 7, 1918
Up to 10 million soldiers lost their lives during the First World War. Pictured here is the first released British prisoners that reached Tournai, a city in western Belgium, near the French border, on 14 November 1918 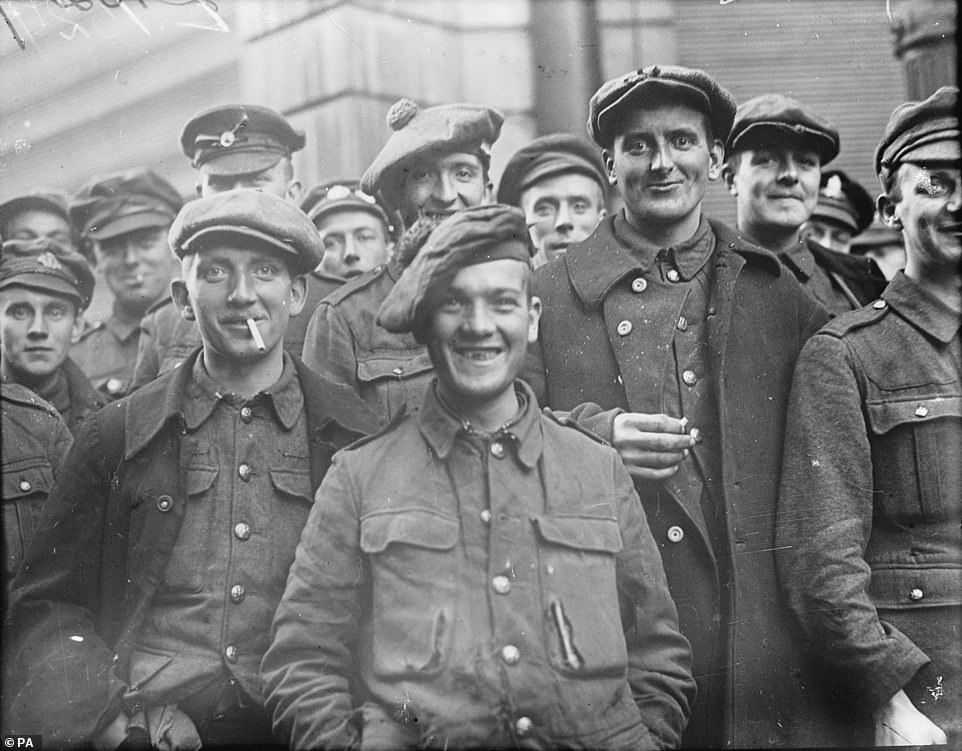 Four empires collapsed, the Ottoman, Austro-Hungarian, German, and Russian, many countries including Britain were left in financial ruin, and the Treaty of Versailles placed severe penalties on Germany, who were forced to accept the blame for starting the conflict, and had to pay 132 billion gold marks to repair the damage they had done.
It was the decisions made in the aftermath of the First World War that led to the rise of Adolf Hitler and the outbreak of World War Two some 20 years later.
The exhibition attempts to paint a picture of what life was like at the end of the war, showing Armistice Day celebrations in Birmingham, refugees returning to Amiens, France, and the treatments given to the many millions of injured servicemen that spent years fighting in the trenches.
The incredible images will feature alongside documents and other objects from the Imperial War Museum's archives for Renewal: Life after the First World War in Photographs.
Demobilised British men handing in their rifles before boarding the Rhine steamer at Cologne, which took them to Rotterdam, on their way home to England, on April 23, 1919 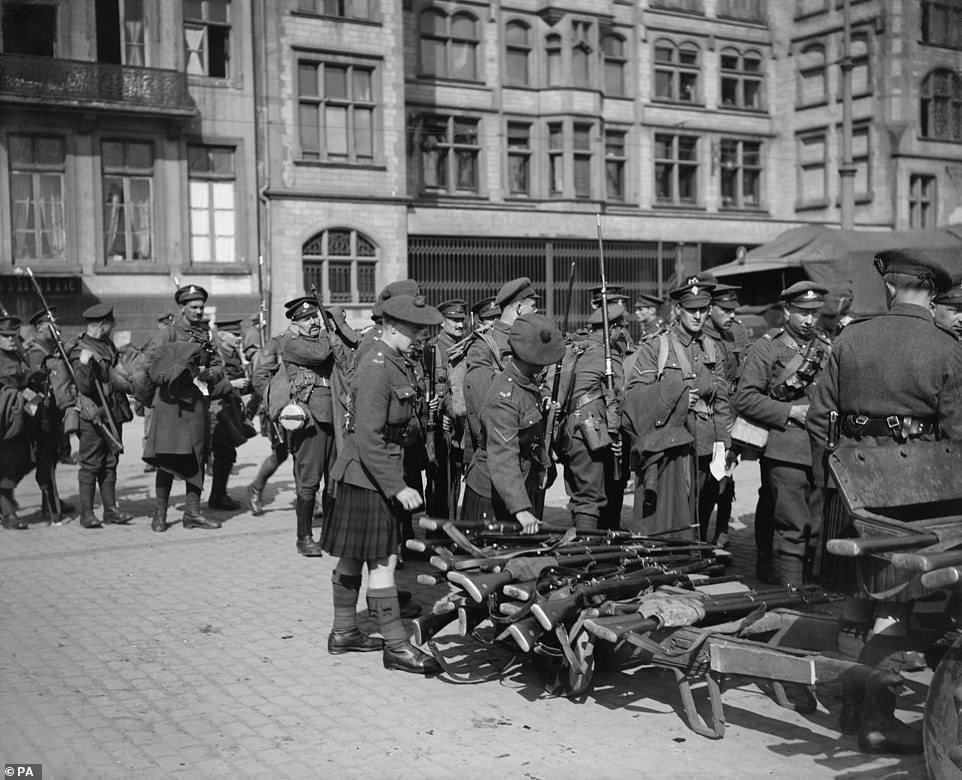 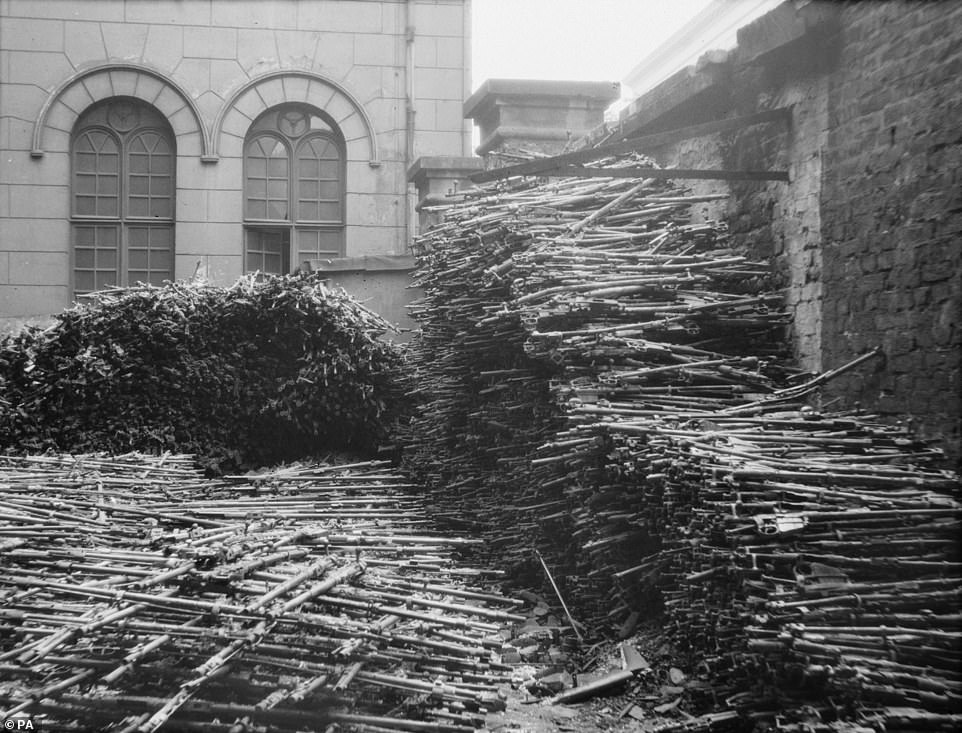 Germany was forced to accept the blame for starting the First World War after the Treaty of Versailles. After the Armistice was signed, German soldiers across the continent surrendered. Pictured is a a haul of 32,000 destroyed German Army rifles piled up and discarded after the end of World War One on November 11, 1918 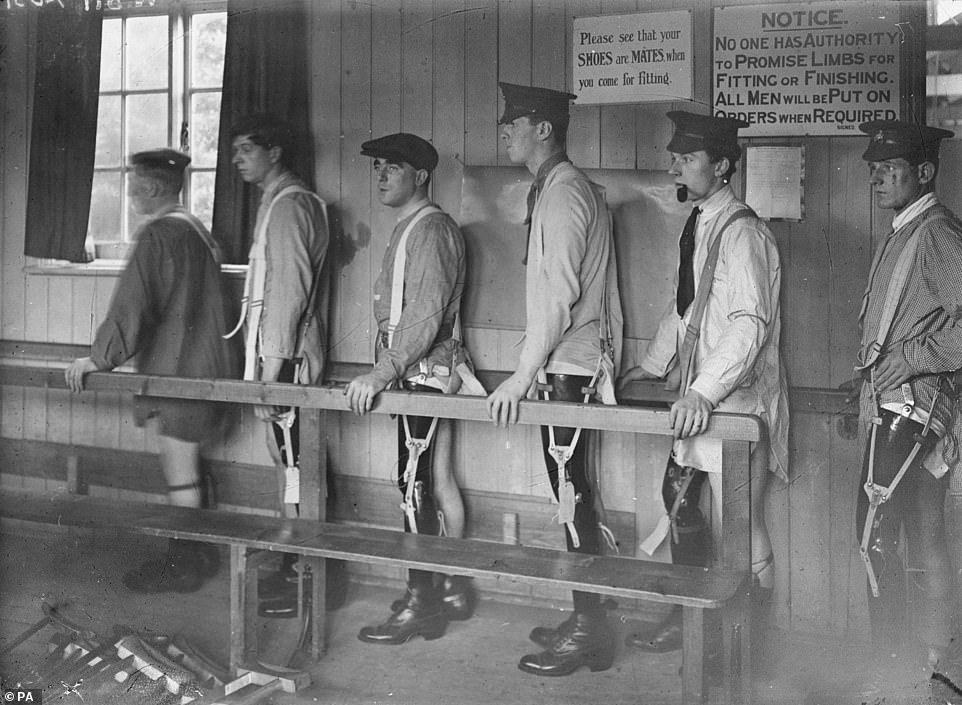 Patients injured in the conflict are being taught to use their new artificial limbs at this rehabilitation centre in Roehampton, south west London. Soldiers' lives were never the same again. Many still suffered from shell shock from their years stuck in the trenches, or were left severely disabled. Some 80,000 British soldiers suffered shell shock (roughly 2% of all that were called up)
Also on display will be images of 32,000 destroyed German rifles, a shearing machine cutting sword blades in half and the German battleship SMS Bayern sinking at Scapa Flow in June 1919.
The exhibition at the Imperial War Museum in London charts the initial optimism after the end of the First World War. But it also reveals the extent of destruction and dislocation it left behind, and how the promise of rebuilding the world did not always deliver.
While the French city of Ypres which was devastated by the fighting was rebuilt along its medieval lines, in the UK social measures such as 'homes fit for heroes' ran out of money.
The exhibition also shows the ingenuity employed in helping servicemen injured in the conflict, through plastic surgery and prosthetic limbs.
And it highlights how companies such as aeroplane manufacturers switched tack to survive, in one case initially by bolting wicker chairs inside bombers to develop civil aviation as a peacetime alternative to warplanes. 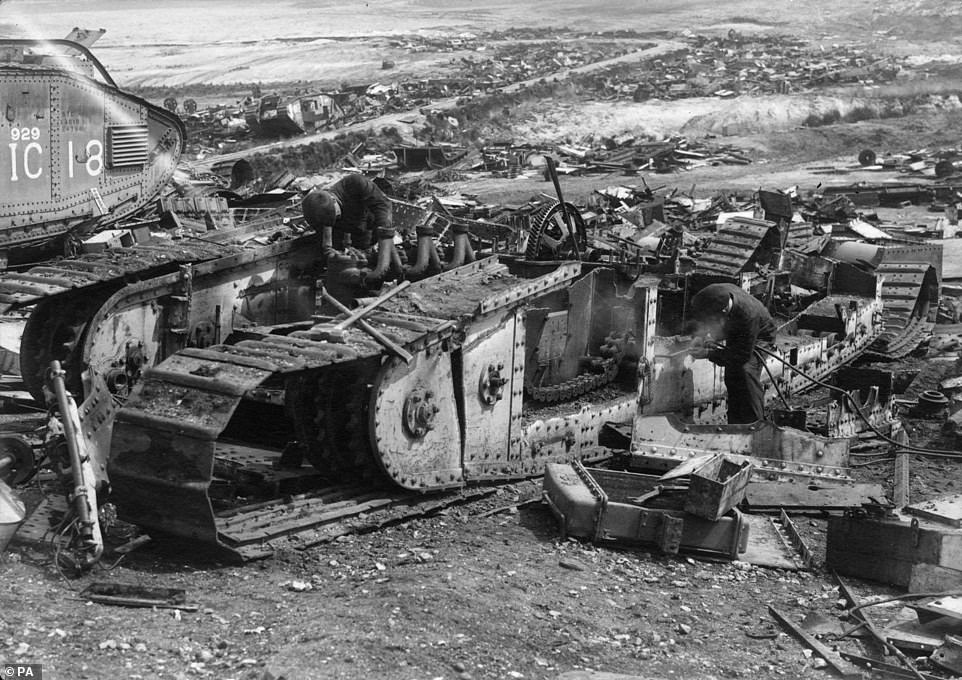 Workers break up a British Mark V Tank, probably at the Steelbreaking and Dismantling Company of Chesterfield, following the end of First World War. The company was engaged in the disposal of tanks and other surplus military equipment for scrap 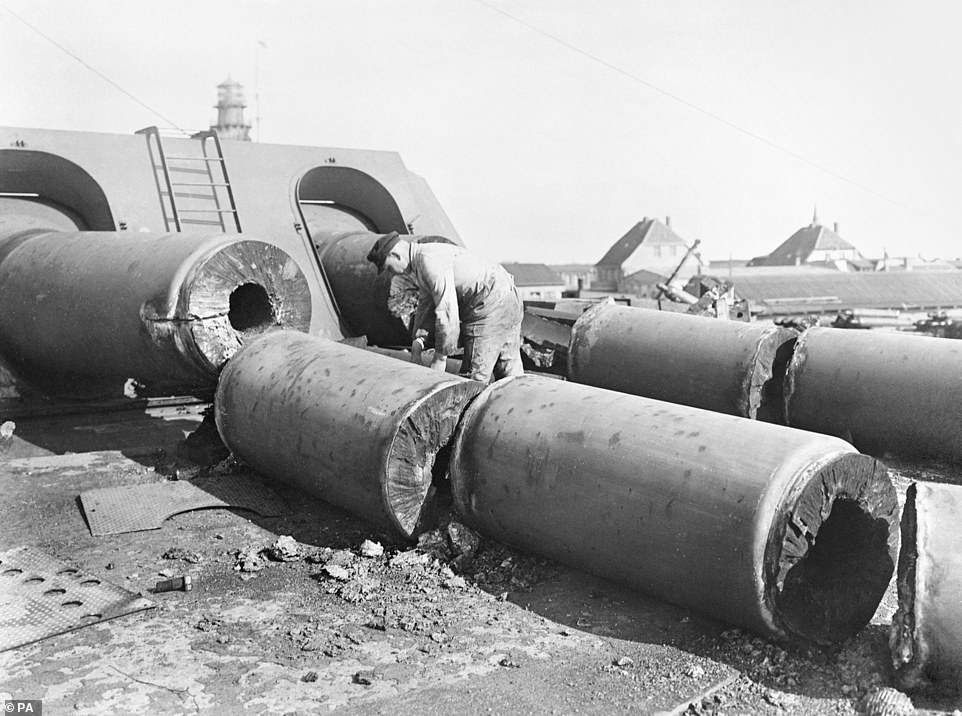 A worker dismantles huge military defences on the German island of Heligoland, in the North Sea. The First Battle of Heligoland Bight was the first naval battle of the First World War, fought on 28 August 1914, between the United Kingdom and Germany. Both sides engaged in long-distance sorties with cruisers and battlecruisers, with close reconnaissance of the area of sea near the German coast—the Heligoland Bight—by destroyer 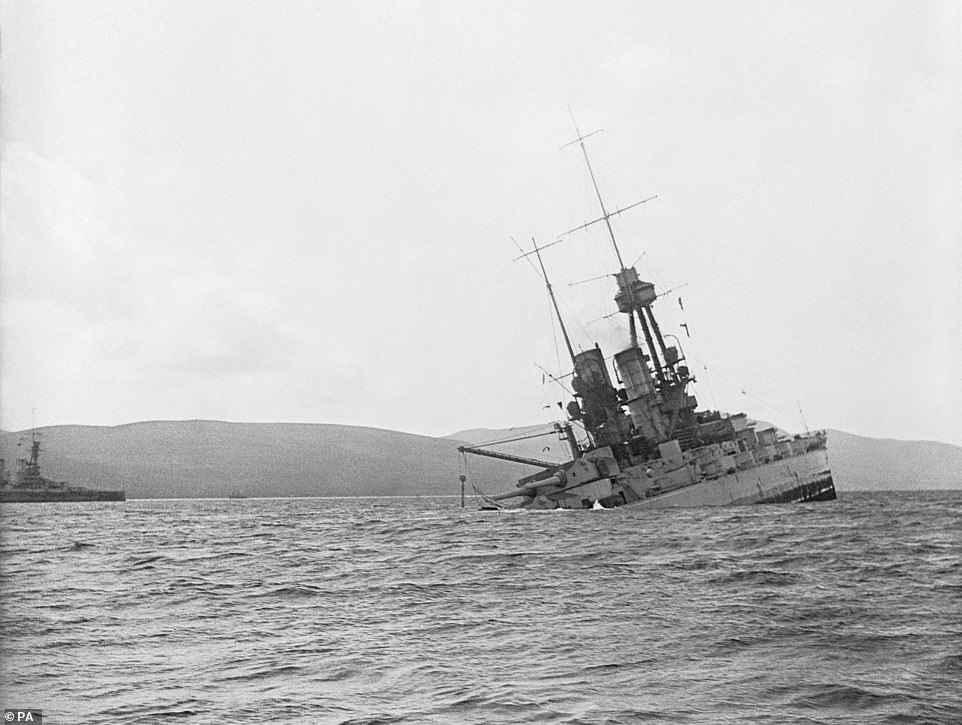 +14
German battleship SMS Bayern sinking at Scapa Flow on June 21, 1919. As part of the Armistice agreement at the end World War I, Germany had to surrender most of its fleet. A total of 74 ships of the German High Seas Fleet arrived in Scapa Flow for internment. On 21 June 1919, under the mistaken belief that peace talks had failed, Rear Admiral Ludwig von Reuter gave the command to scuttle the entire fleet in the Flow. A total of 52 ships went to the seafloor and this remains the greatest loss of shipping ever recorded in a single day 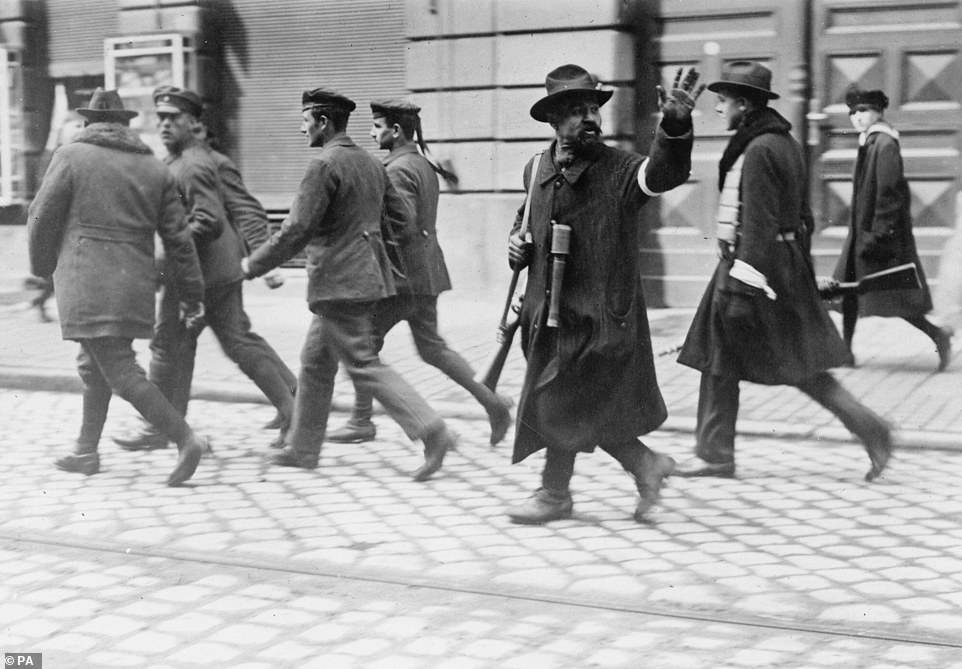 Armed civilians leading members of the Red Guard away during the liberation of Munich on May 1, 1918 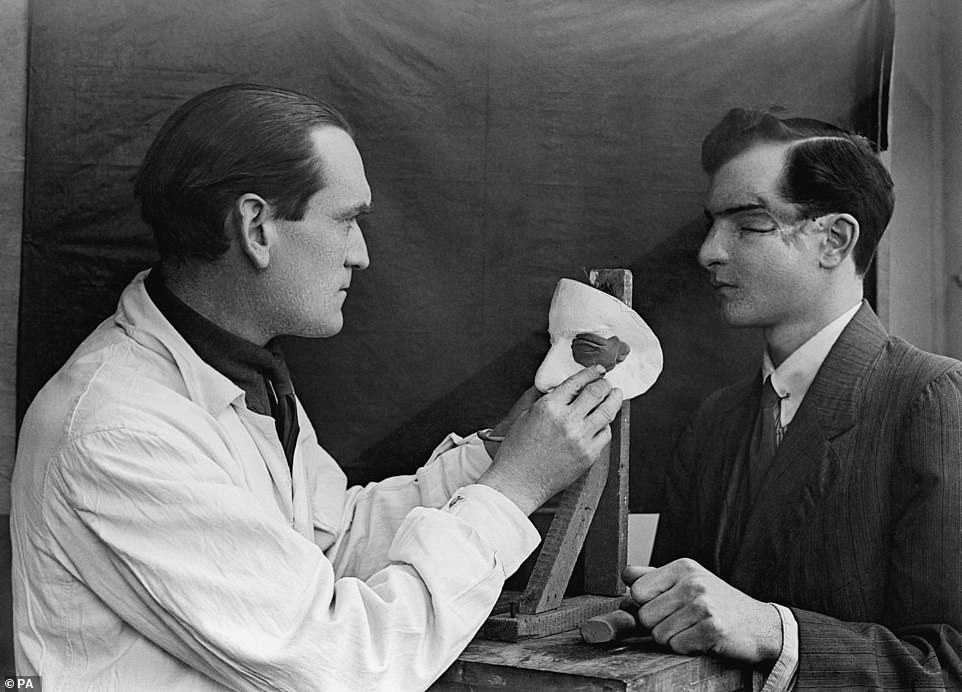 Captain Francis Derwent Wood puts the finishing touches to a cosmetic plate and compares it to the face of this disfigured patient for whom the plate is being made, at the 3rd London General Hospital. It is not clear when the image was taken
Alan Wakefield, head of First World War and early 20th century conflict at IWM, said: 'Drawing primarily on IWM's rich and varied photography archive, this new exhibition presents images from both official and personal collections, giving insight into the innovation, opportunism and resourcefulness that shaped the rebuilding and regeneration of the post-war world.
'Both surprising and inspiring, the exhibition highlights the resilience and ingenuity of the human spirit in a time of unprecedented social and political change.'
Renewal: Life after the First World War in Photographs is a free exhibition at IWM London, as part of Making a New World, a season of exhibitions taking place across IWM London and IWM North until the end of March 2019 looking at how the First World War shaped today's society. 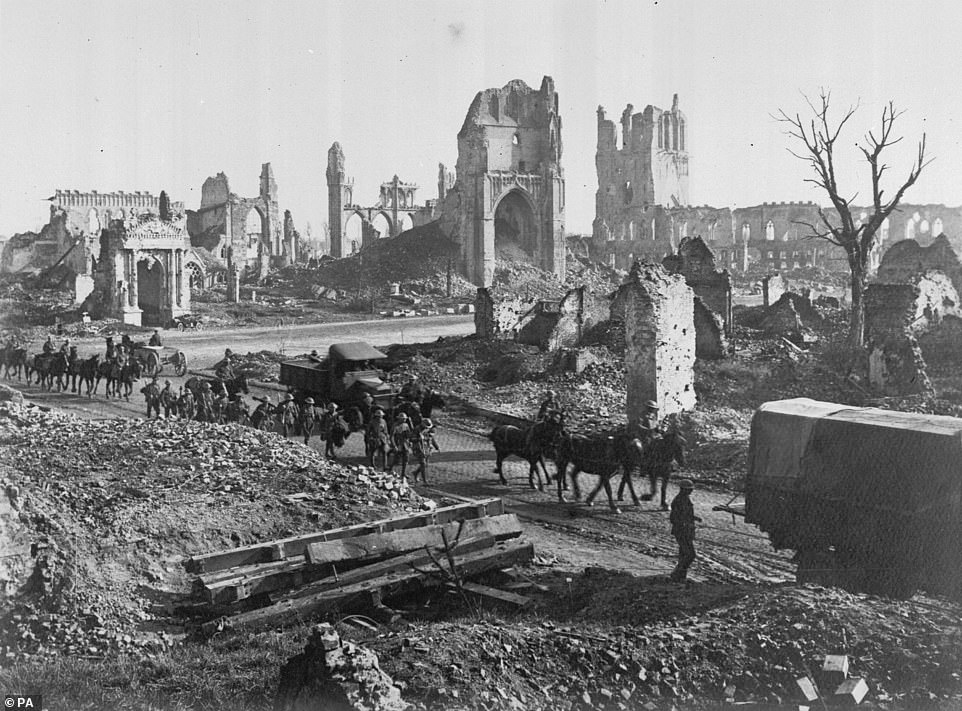 In this photo horses and men of 1st Anzac Corps make their way past the ruins of the Cathedral and Cloth Hall in Ypres following the end of the First World War. 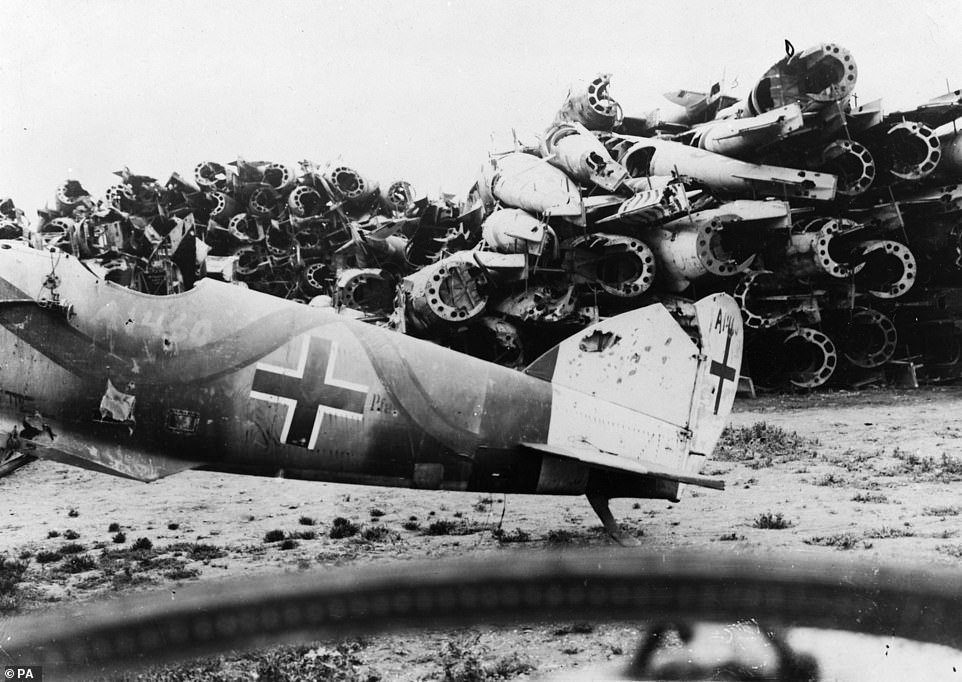 A heap of fuselages from dismantled German planes at Cologne. The aircraft in the foreground of this photograph, taken on January 6, 1919, is a Pfalz Scout
by Taboola
Sponsored Links 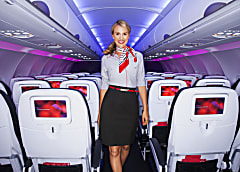 New Site Finds the Cheapest Flights in Seconds!FlightFinder
Posted by free heip at 10:17