Secretary of State Mike Pompeo and VP Mike Pence, through a spokesman, denied being the author Thursday. 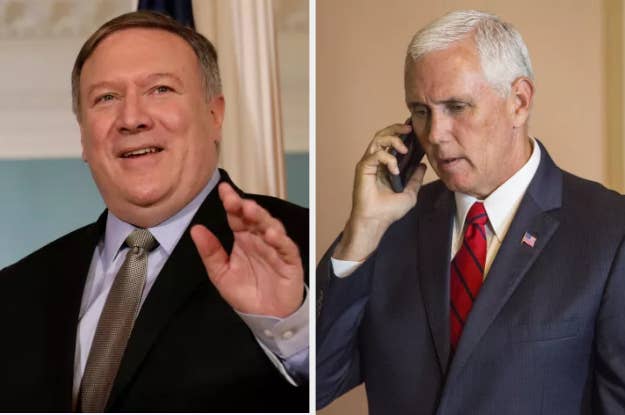 Multiple top officials in the Trump administration have now denied writing the anonymous opinion piece published in the New York Times that described a "resistance" to Trump's "worst inclinations" by officials within the administration.
The denials started early Thursday morning with Secretary of State Mike Pompeo, then Vice President Mike Pence — through a spokesperson — and Dan Coates, the Director of National Intelligence all claiming not to be the writer of the piece.
Pompeo, speaking in Delhi, called the piece "sad" and said The New York Times should not "have chosen to take a disgruntled, deceptive bad actor's word for anything and put it in their newspaper."
Pompeo's comments were followed this morning by a tweet from Vice President Pence's communications director denying that Pence was the author of the piece, saying "The Vice President puts his name on his Op-Eds." He added that the author should be "ashamed."
Coats put out a statement on behalf of himself and his principal deputy, Sue Gordon, saying that neither of them had written the piece. The statement said they have insisted that the intelligence community "remain focused on our mission to provide the President and policymakers with the best intelligence possible."
The Opinion article published yesterday said that officials inside the Trump administration were working to thwart some elements of President Trump's agenda, and said "I would know. I'm one of them."
"The Deep State and the Left, and their vehicle, the Fake News Media, are going Crazy - & they don’t know what to do," Trump tweeted on Thursday morning.
On Wednesday night Trump questioned whether the writer, cited as a "senior administration official" really exists, and said in a tweet that if they did, The New York Times "must, for National Security purposes, turn him/her over to government at once!"
Speaking on The Daily podcast, New York Times Opinion Editor James Dao said that he had been introduced to the official by a trusted intermediary, but later had "direct communication" with the author and was "totally confident that this was truly the official in the Trump administration that they claimed they were."
Pence's denial comes after rampant speculation on social media that he could have written — or at least been aware of — the op-ed. The speculation centered on the use of the word "lodestar," which Pence says a lot.
Dao told The Daily that "the 'lodestar' question is fascinating to me...It never occurred to me to change a word to help hide this person's identity. That's actually the antithesis of what we do."
Posted by free heip at 07:35