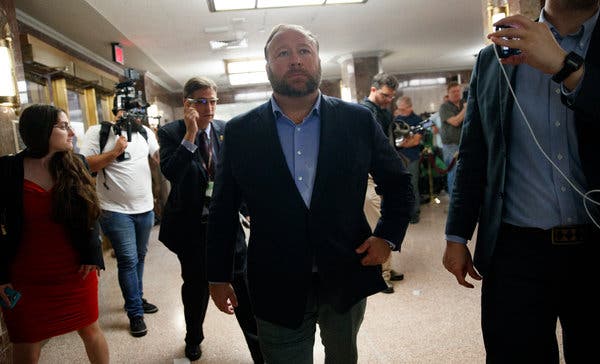 SAN FRANCISCO — Apple, Facebook and Google’s YouTube mostly barred Alex Jones, the right-wing provocateur and creator of the conspiracy theorist website Infowars, last month for propagating hate speech. Twitter did not.
On Thursday, though, Twitter said it would permanently suspend Mr. Jones’s account, as well as the account for Infowars. The social media company said Mr. Jones had posted messages within the previous 24 hours that violated its policies, which prohibit direct threats of violence and some forms of hate speech but allow deception or misinformation.
“Today, we permanently suspended @realalexjones and @infowars from Twitter and Periscope,” the company posted on its Safety account. “We took this action based on new reports of Tweets and videos posted yesterday that violate our abusive behavior policy, in addition to the accounts’ past violations.”

Twitter announced its decision after weeks of will-they-won’t-they scrutiny on whether it would remove Mr. Jones and Infowars from its service. When Facebook, Apple, YouTube and others took down Mr. Jones’s content in early August, Twitter’s chief executive, Jack Dorsey, said Mr. Jones’s posts had not violated the company’s policies. That prompted criticism, since Mr. Jones has regularly spread lies, including that the Sandy Hook school shooting was a hoax.
Mr. Dorsey defended Twitter’s decision at the time, saying he would not depart from the company’s policies in response to political pressure.
“We’re going to hold Jones to the same standard we hold to every account, not taking one-off actions to make us feel good in the short term, and adding fuel to new conspiracy theories,” Mr. Dorsey tweeted in August.
Later that month, Twitter temporarily suspended Mr. Jones after he posted comments that appeared to foment violence. Mr. Jones was unable to post new tweets for seven days, but then returned to posting new messages.
Twitter’s latest action cuts off Mr. Jones’s final direct channel to mainstream audiences, severely restricting his ability to attract new viewers and build his public profile. Facebook’s and YouTube’s bans have already drastically reduced his reach, according to a New York Times analysis. After the other tech companies restricted him, Mr. Jones’s Twitter account enjoyed about an 8 percent bump, or 70,000 new followers, to nearly 900,000 during a check last week, according to Social Blade, a social media data firm.
New followers are also crucial to Mr. Jones’s business hawking nutritional supplements and survival gear, which help fund his Infowars operation. Without access to mainstream social-media sites, he will increasingly be speaking to his established audience that already goes directly to Infowars.com for his shows.

Infowars did not respond to a request for comment. But Mr. Jones quickly found a way to make his anger about Twitter’s decision known — on Twitter.
He added, “They know their bans of not just me but millions of other people have angered folks, so they’re moving aggressively.”

Periscope is Twitter’s live-streaming video app. While Twitter’s permanent ban affects the Periscope accounts for Infowars and Mr. Jones, the company temporarily suspended @WarRoomShow after Mr. Jones appeared on its broadcast. In a tweet, the company said it would take action “if other accounts are utilized in an attempt to circumvent” the ban of Mr. Jones and Infowars.

A day earlier, Mr. Dorsey had testified before Congress about election interference and allegations of political bias on Twitter. At one of two hearings on Wednesday, he denied that Twitter had a bias against conservatives, an accusation that Republican lawmakers raised repeatedly during the session.
Mr. Jones was also on Capitol Hill on Wednesday, sitting in the audience during a morning session in the Senate. At one point he confronted Senator Marco Rubio, Republican of Florida, in a Senate hallway, and at another he complained about Facebook and Google.
“They are outright banning people, and they are blocking conservatives involved in their own First Amendment political speech,” he said.

Mr. Jones also broadcast video on Periscope of himself on Wednesday insulting the CNN reporter Oliver Darcy. Mr. Darcy had previously reported on tweets by Mr. Jones that appeared to violate Twitter’s policies.

The video of Mr. Jones’s harassing behavior toward Mr. Darcy was among the material that Twitter considered before deciding on the bans, according to a person briefed on the situation, who was not authorized to speak publicly.
In his Periscope broadcast on Thursday, Mr. Jones defended his behavior toward Mr. Darcy, saying the CNN reporter is a public figure and had bullied tech companies into barring Mr. Jones. He suggested, without evidence, that Twitter had barred him to protect CNN and Mr. Darcy because the news organization was part of a government conspiracy.

“CNN is part of this C.I.A. stay-behind network that I brought up, that Obama set up, that we’re telling the president about,” Mr. Jones said.

Mr. Darcy referred requests for comment to a CNN spokeswoman, who declined to comment.
Mr. Jones’s most shared tweet, with more than 370,000 retweets, was his repost of a tweet from President Trump of a video of Mr. Trump attacking a person whose head had been replaced by the CNN logo, according to CreatorIQ, which helps people manage their social media accounts. Indeed, 13 of Mr. Jones’s 18 most popular tweets simply reposted something the president had tweeted.

Twitter said it had followed routine procedures in permanently suspending the accounts of Mr. Jones and Infowars. The company typically issues temporary suspensions, like the one Mr. Jones received last month, before enacting a ban.

Mr. Jones is one of the most prominent alt-right figures to be barred from Twitter. In 2016, the company barred Milo Yiannopoulos, a former editor of Breitbart, for his involvement in an online harassment campaign against the actress Leslie Jones. Another former Breitbart writer, Chuck Johnson, was suspended for threats toward the civil rights activist DeRay Mckesson. Twitter also bars hate groups like the American Nazi Party and Golden Dawn, an ultranationalist organization based in Greece.

In a final tweet before his Twitter account vanished, Mr. Jones posted a photo of himself sitting behind Mr. Dorsey during Wednesday’s congressional hearings. On the photo was the hashtag #FreeAlexJones.