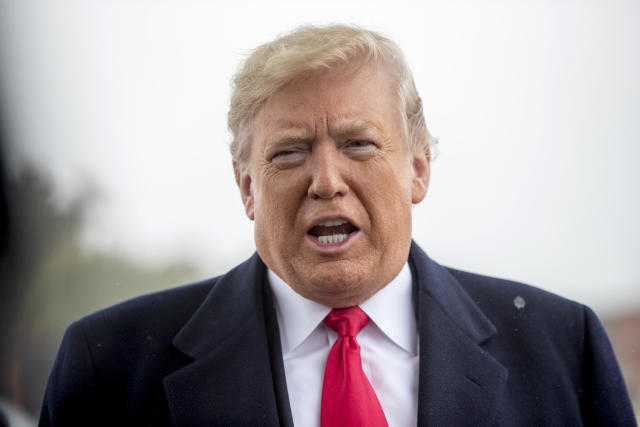 WASHINGTON (AP) — President Donald Trump has astonished legal scholars with his claim that he can end birthright citizenship with a swipe of his pen. No, they say, he can't.
Trump also went far off track in asserting that the U.S. is the only country that automatically grants citizenship to anyone born in the country. Many do.
His comments in an interview with "Axios on HBO":
TRUMP: "It was always told to me that you needed a constitutional amendment. Guess what? You don't. ... Well, you can definitely do it with an act of Congress. But now they're saying I can do it just with an executive order."
THE FACTS: Scholars widely pan the idea that Trump could unilaterally change the rules on who is a citizen. It's highly questionable whether an act of Congress could do it, either, though it is conceivable that legislators could change the rules regarding children born in the U.S. of parents who are in the country illegally.
Peter Schuck is perhaps the most prominent advocate of the idea that birthright citizenship is not conveyed by the Constitution to children of parents who are living illegally in the U.S. Even he says "Trump clearly cannot act by" executive order.
"I feel confident that no competent lawyer would advise him otherwise," he said by email Tuesday. "This is just pre-election politics and misrepresentation and should be sharply criticized as such."
Schuck, of Yale, and colleague Rogers Smith of the University of Pennsylvania have argued since the mid-1980s that Congress can set the rules for providing citizenship to U.S.-born children of parents who came illegally.
But most scholars on the left and right share the view that it would take a constitutional amendment to deny automatic citizenship to children born in the U.S. to parents who are in the country illegally.
James Ho, a conservative Trump-appointed federal appeals court judge, wrote in the Green Bag legal journal in 2006 that birthright citizenship "is protected no less for children of undocumented persons than for descendants of Mayflower passengers."
Stephen Yale-Loehr, a Cornell university immigration expert, said the case against Trump's authority is "not open and shut, but the better view is it would require a constitutional amendment."
The Constitution's citizenship clause was part of the post-Civil War amendments that enshrined the rights of African-Americans. The citizenship clause, in particular, was intended to overturn the Supreme Court's notorious Dred Scott decision of 1857 that held African-Americans were not citizens.
The Supreme Court has never ruled squarely about the clause's application to children of immigrants who are in the U.S. illegally. Trump did not make a distinction between legal and illegal status in his remarks. An 1898 Supreme Court decision held that the U.S.-born son of legal Chinese immigrants was a citizen under the 14th Amendment; a footnote in a 1982 decision suggests there should be no difference for children of foreign-born parents whether they are in the U.S. legally or illegally.
___
TRUMP: "We're the only country in the world where a person comes in, has a baby and the baby is essentially a citizen of the United States for 85 years with all of those benefits. It's ridiculous. It's ridiculous. And it has to end."
THE FACTS: That's flat-out wrong.
The U.S. is among about 30 countries where birthright citizenship — the principle of jus soli or "right of the soil" — is applied, according to the World Atlas and other sources. Most are in the Americas. Canada and Mexico are among them. Most other countries confer citizenship based on that of at least one parent — jus sanguinis, or "right of blood" — or have a modified form of birthright citizenship that may restrict automatic citizenship to children of parents who are on their territory legally.
More broadly, Trump's view that U.S.-born children of foreigners live a lifetime of taking "all those benefits" ignores the taxes they pay, the work they do and their other contributions to society.
Posted by free heip at 07:35