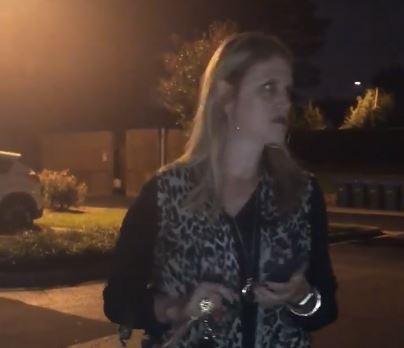 A white woman is facing criminal charges after confronting two African American women at an apartment complex in south Charlotte.
A video, originally posted by one of the women on Facebook, shows a white woman approaching them in a parking lot.
“Where do you live in this place? Because this is Myers Park. This is South Park,” she says.
They calmly ask her to leave them alone. One woman says she lives there too.
The white woman then calls one woman a “b----“ and asks, “Is your baby daddy here?”
In another video, the white woman says, “Do I need to bring out my concealed weapon too?A CMPD spokesman said Saturday four criminal summons’ have been issued for the woman - two counts of communicating threats and two counts of simple assault. The website of the Mecklenburg County Sheriff’s Office shows warrants matching that description were issued for Susan Westwood on October 21.
According to WBTV, Westwood’s employer Spectrum says it has terminated her.
“The incident recorded in Charlotte is a blatant violation of Charter’s code of conduct and clearly disregards the company’s commitment to inclusion and respectful behavior,” the company said in a statement to the TV station.
According to police records, the incident started just before midnight on October 19 in the parking lot of Camden Fairview off Providence and Fairview roads. The videos were posted on Facebook this past Friday and sparked outrage on social media. As of Saturday night, they’ve had nearly a million views.
The police report says “the victim stated that…the suspect physically assaulted her and threatened her with bodily injury.” It lists the victim’s name as Leisa Garris.
Mary Garris and her sister Leisa spoke with TV reporters on Saturday. Mary Garris said the confrontation was racially-motivated and said they decided to release the video to draw attention to the “overt racism still going on in 2018.”
The encounter captured on video
The first part of the encounter appears to last about five minutes. The white woman asks where they live. She then gets up close to the camera.
One of the sisters tells her to leave them alone and that she’s a resident too.
“What’s going on here in this parking lot that you feel that you need to congregate?” says Westwood. “I’m white and I make a $125,000 a year.”
“What are you doing here, hanging out here on a Friday night? Cut it out. Don’t f--- with your life, b---. Cut it out….Get out of here,” continues Westwood.
The video shows Leisa Garris going off to call 911.
“My car is dead and I’m calling AAA. There’s this lady bothering me in front of my door. Please call the police….She’s calling us names and you can smell the alcohol.”
Westwood follows her and gets up close before walking away. Another video captures her saying from a distance, “Do I need to bring out my concealed weapon too?”
Leisa Garris calls 911 once again to send police.
“The lady was pushing me in my face….It surprised me. I’ve been living here over a year and I’ve never been treated this way,” said Garris.
Posted by free heip at 07:12