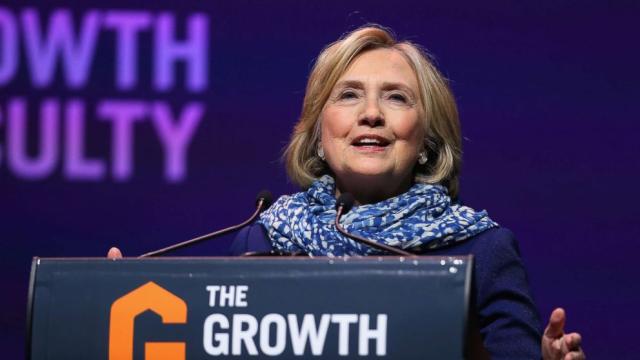 Hillary Clinton says Kavanaugh's political 'revenge' claim 'deserves a lot of laughter'originally appeared on abcnews.go.com
Hillary Clinton, former secretary of state and 2016 presidential candidate, responded with laughter on Tuesday to assertions by Supreme Court nominee Brett Kavanaugh that she played a role in the political maelstrom that unfurled from allegations of sexual assault against him.
"In his extraordinary presentation in the Senate, Brett Kavanaugh said that the 'political hit job' directed at him was being done on behalf of the Clintons, among other people," asked Jeffrey Goldberg, editor-in-chief of The Atlantic, said during an event hosted by his news organization. "Your response?"
Clinton paused, laughing loudly with the audience at The Atlantic Festival, and said, "I mean, really, yes, it deserves a lot of laughter."
"I thought it was just part of the whole – of his very defensive and unconvincing presentation. And I told someone later, ‘Boy, I will tell you – they give us a lot of credit. 36 years ago, we started this against him,’" she said, referring to California professor Christine Blasey Ford's allegations that he sexually assaulted her while the two were in high school over three decades ago. Clinton was one of the headliners kicking off the first day of the Washington, D.C. festival held by the magazine.It was Clinton's first public comment on the matter since Kavanaugh and Ford testified before the Senate Judiciary Committee Thursday. During his time as a deputy to independent counsel Ken Starr, Kavanaugh pushed questioning then-president Bill Clinton about graphic details concerning his sexual relationship with intern Monica Lewinsky, according to a memo.
“This whole two-week effort has been a calculated and orchestrated political hit fueled with apparent pent-up anger about President Trump and the 2016 election, fear that has been unfairly stoked about my judicial record, revenge on behalf of the Clintons, and millions of dollars in money from outside, left-wing opposition groups," he said in his opening statement.
Clinton called Kavanaugh's behavior "quite out of bounds," and joked about knowing what the pressure of testifying before the Senate is like.
"I don't ever remember anything like that, as somebody who has testified under difficult circumstances," Clinton said to laughter from the audience. In 2015, Clinton faced 11 hours of questioning before the House Select Committee on Benghazi to answer questions on a 2012 terrorist attack while she was secretary of state.
"You were never so emotional," Goldberg said.
"Well, look, for 11 hours, you couldn't have been. But for whatever period of time – there is something you seek in judges, of a judicious temperament. People who are able to discipline themselves, to be open to the evidence, wherever it might lead, to be fair to all the litigants who are appearing before them," Clinton said. "I am a recovering lawyer. I used to practice law. And I was in different kinds of courts. And this was quite unusual, what we saw the other day. And certainly, the senator should on both sides of the aisle take that into account."
Posted by free heip at 08:55