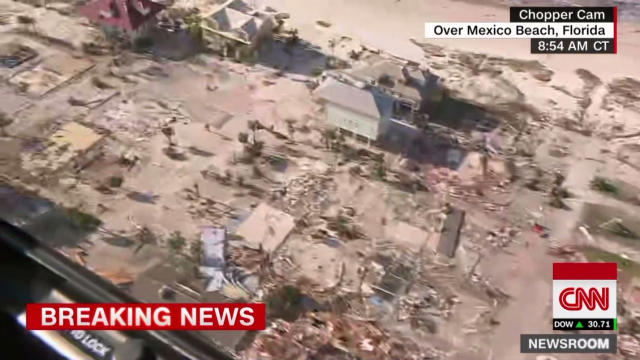 CNN’s Brooke Baldwin struggled to find the words to describe the devastation left by Hurricane Michael as she flew in a helicopter above Mexico Beach, Fla., on Thursday morning.
“It’s gone. It’s gone,” Baldwin said before her cameraman panned to long rows of leveled homes below. “It’s — it’s obliterated.”
The small beachfront community, located about 40 miles south of Panama City, Fla., was where the Category 4 storm made landfall on Wednesday afternoon with maximum sustained winds of 155 mph, just 2 mph below the threshold of Category 5. It was the strongest hurricane ever to hit the Florida Panhandle, and the third strongest ever to strike the U.S. mainlanAt least two people died in the storm, and federal officials fear the death toll could rise as search and rescue crews begin to assess the damage.
Roads to Mexico Beach were virtually impassable, so Baldwin, who spent the night in nearby Destin, Fla., chartered a chopper to get the view from above. Fires could be seen burning in the distance, homes shredded and boats strewn across the town of about 1,100 people.
“It’s just awful to look at,” Baldwin told viewers before her feed cut out. “It was bad in Panama City Beach, but I’ve never seen anything like this … I have no words.”


A Tampa Bay Times reporter and a photojournalist who managed to make it to Mexico Beach on the ground early Thursday described what they saw:
Homes completely destroyed. Refrigerators and toilets where the storm left them. Thousands of two-by-fours, chewed up and indecipherable. Refrigerators, toilets, staircases to nowhere and front doors 10 feet up with no way down. The neighborhoods along U.S. 98 looked like a child’s playroom after a massive tantrum.
More than 180,000 people along the Florida Panhandle were under mandatory evacuation orders. And while many heeded those orders, some did not.
At least four survivors were discovered by the Tampa Bay Times reporters, including a woman and a man who “were looking for help with their mother’s portable oxygen machine.”