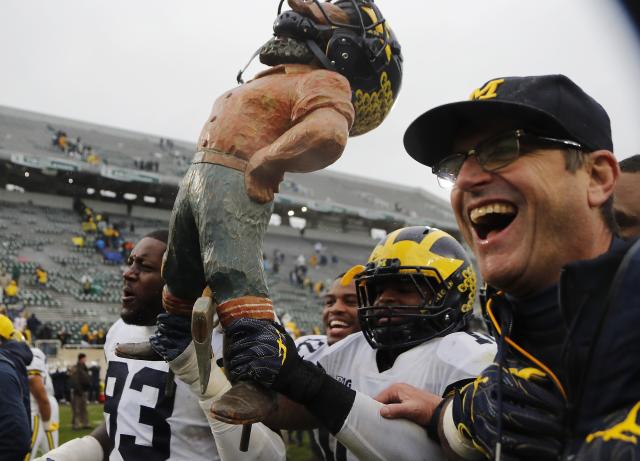 To call the Michigan-Michigan State rivalry heated would be an understatement.
Before Saturday’s game, which Michigan won 21-7, there was a brief altercation when Michigan players stayed on the field during Michigan State’s traditional pregame walkAfter the game, Michigan coach Jim Harbaugh called the pregame scuffle “bush league,” and even called out MSU coach Mark Dantonio in the process.
“I heard about it. I didn’t see it,” Harbaugh said. “Apparently they clotheslined two of our guys and came out in their helmets. Lawrence Marshall, they just went up and clotheslined him. One of the guys ripped off LaVert Hill’s headphones. Total bush league, and apparently coach Dantonio was five yards behind it all smiling. I think it’s bush league. That’s my impression of it.”Dantonio was asked about Harbaugh’s comments. He wasn’t having it, calling it “BS.”Michigan State had won eight of the previous 10 games in the series, including two of three during Harbaugh’s tenure as head coach.
But the Wolverines have traditionally dominated MSU. After the game, Chase Winovich, like other UM players in the past, referred to MSU as “little brother.”And like linebacker Devin Bush did before the game, Michigan celebrated by stomping on the Spartan logo.
Posted by free heip at 17:16