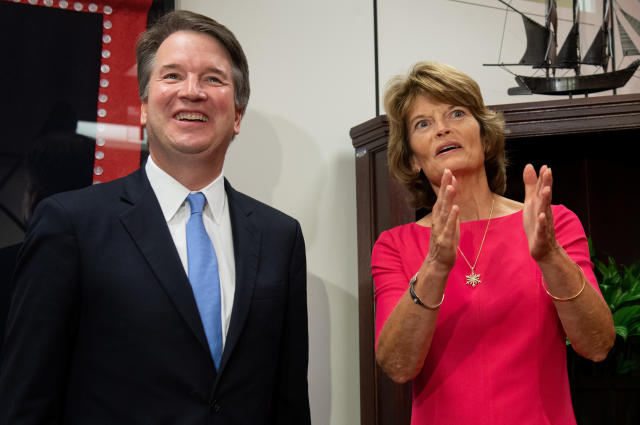 WASHINGTON ― Sen. Lisa Murkowski (R-Alaska) says she will oppose Brett Kavanaugh, President Donald Trump’s nominee to the Supreme Court.
“I believe Brett Kavanaugh is a good man,” Murkowski told reporters on Friday after voting against bringing his nomination to a final vote. “In my view, he’s not the right man for the court at this time.”
Murkowski, a key GOP moderate, said she did not come to a decision until walking onto the Senate floor on Friday. The long-awaited announcement comes as a relief to Democrats and women’s groups who view the appellate court judge as a serious threat to the Affordable Care Act and reproductive rights, which Murkowski supports. Her decision probably also had something to do with loud opposition to Kavanaugh from Alaska Natives, who were crucial to Murkowski’s re-election in 2010.
Murkowski was also under pressure to reject Kavanaugh’s nomination based on the allegations of sexual assault that were leveled against him late in the confirmation process. Last month, the Alaska centrist called for a pause in the process to hear from Christine Blasey Ford, the woman who accused Kavanaugh of assaulting her in high school when they were both teens, as well as an investigation of the charges. The FBI conducted a limited probe of the allegations but the report proved inconclusive.
It’s unclear, however, whether Murkowski’s opposition to Kavanaugh will be enough to stop him from being confirmed. The Senate is expected to hold its final vote on the nomination on Saturday when several other moderate senators could help get him a seat on the Supreme Court.
Nominated by Trump in July to replace former Justice Anthony Kennedy, the 53-year-old Kavanaugh is viewed by legal experts as a reliable conservative who will tilt the balance of the Supreme Court to the right for decades.
Murkowski, like fellow Republican centrist Sen. Susan Collins of Maine, supports abortion rights. Democrats and progressives groups hoped to sway her vote with an intense monthslong lobbying campaign, arguing that Kavanaugh would roll back abortion rights for millions of women in America. They had some reason to be optimistic: Both GOP senators bucked Trump when they helped vote down last year’s effort to repeal the Affordable Care Act.
But Murkowski stayed quiet on the matter, even after Democrats released an email Kavanaugh wrote in 2003 as a White House official for George W. Bush in which he seemed to question whether Roe v. Wade ― the 1973 decision that legalized abortion nationwide ― was “settled law.”
While both GOP senators faced pressure to reject Kavanaugh based on his views on abortion rights, Murkowski was also urged to reject the nomination by advocates for Alaska Natives who had concerns with the judge’s record on climate change, voting rights and fishing rights. Alaska Native rights groups were particularly concerned about how the conservative judge would vote on a case they fear could destroy the way of life for tribal communities who rely on subsistence fishing in protected federal waters.
Alaskan tribal representatives, including leaders of the Hughes Tribal Council, the Ruby Tribal Council, the Tanana Tribal Council and the Native Village of Venetie Tribal Government, spoke out against Kavanaugh’s nomination.
Murkowski got even more reason to oppose Kavanaugh last month when Alaska Gov. Bill Walker (I) and Lt. Gov. Byron Mallott (D) came out against the nomination, voicing concern about the judge potentially voting to strike down the Affordable Care Act’s Medicaid expansion and its protections for patients who have pre-existing conditions.
Murkowski, 61, isn’t up for re-election until 2022 ― a timeline that surely gave her some breathing room on Kavanaugh’s nomination. She owes little to the GOP establishment, having mounted a successful write-in campaign in 2010 with the help of tribal communities and Alaska independents.
“None of this has been fair,” Murkowski told reporters on Friday about the Kavanaugh confirmation process.
Posted by free heip at 11:20