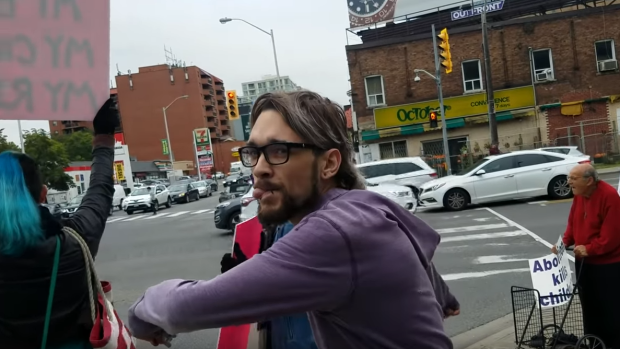 Toronto police are investigating after a man was caught on camera kicking a female anti-abortion protester, supposedly in the name of “defending women’s right to choose.”
Investigators told CP24 that the incident occurred on the afternoon of Sept. 30, at the intersection of Bloor Street West and Keele Street in the Toronto’s west end.
In the video – that has since gone viral on YouTube – a man in a purple hooded sweater with a flower behind his ear is seen confronting a group of mostly female anti-abortionist activists holding signs on the sidewalk. He asks the woman filming him about her opinion of impregnated rape victims choosing abortion.
“If somebody gets raped by somebody and they’re like ‘I’m a 16-year-old and I can’t have this baby’ think you should keep it?” he asks her.
“It’s a baby,” the woman behind the camera is heard responding.
As she starts to further explain her position, the man in the purple sweater sticks out his tongue and kicks her. The camera then loses focus.
In the background, voices can be heard shouting to call the police while the man says he meant to “kick her phone.”
Police said the suspect fled the scene before officers arrived. The woman suffered “non-life threatening” injuries in the attack.
The man in the video, who has been identified on social media as Jordan Hunt, has been fired from his job as a hairdresser at a salon located in Toronto’s Parkdale neighbourhood, according to an Instagram post by the business.
Noble Studio 101 announced that Hunt has been let go after he was caught on camera “assaulting an innocent bystander” at the anti-abortion rally.
Posted by free heip at 12:51