Men as the real victims? After Kavanaugh, #HimToo gains attention 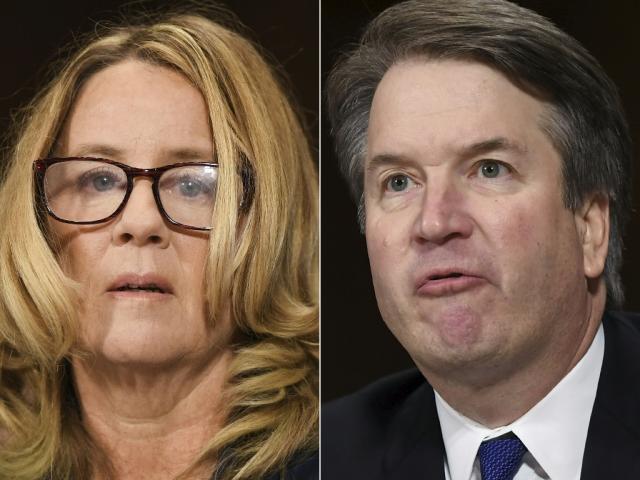 Washington (AFP) - The notion that it is dangerous to be an American man in the #MeToo era took off during the angry debate over Supreme Court nominee Brett Kavanaugh.
But tossing more fuel onto the fire were a sarcastic tirade from Donald Trump and a painfully awkward tweet from a seemingly over-anxious mother.
On the day Kavanaugh was sworn in as the junior justice to the high court, Pieter Hanson's mother posted a message on the social media network comparing the plight of the jurist -- who had vigorously denied allegations of sexual aggression -- to the dating challenges facing her 32-year-old son.
Under the hashtag #HimToo, she said her son was refusing to go on "solo dates due to the current climate of false sexual accusations by radical feminists with an axe to grind."
To emphasize her point, she posted a photo of the good-looking young man, an angelic smile on his face, posing in his crisp, white navy uniform.
The post immediately went viral, inspiring hundreds of mocking memes, most of them having fun with the seemingly overwrought concerns of Pieter Hanson's hovering mother.
The young man, now a navy veteran, responded by quickly posting a new photo of himself, in the same pose as the first one but in T-shirt and jeans, to gently take exception with his mother.
"Sometimes the people we love do things that hurt us without realizing it," he tweeted. "I respect and #BelieveWomen. I never have and never will support #HimToo."
In a series of subsequent TV appearances, Hanson, joined by his brother Jon, made good-natured sport of the whole matter.
The US president himself took up the same theme early this month before reporters at the White House.
"It's a very scary time for young men in America, where you can be guilty of something that you may not be guilty of," said Trump, himself the target of multiple allegations of sexual aggression, which he has denied.
Then a few days later, Trump mercilessly mocked Kavanaugh's accuser, Christine Blasey Ford, during one of his big political rallies. Pretending to be Blasey Ford, he sneered at her lapses of memory over the alleged aggression dating from the 1980s, drawing uproarious laughter from supporters.
- Men as victims -
Pieter Hanson's mother didn't invent the #HimToo hashtag, which gained steam during the bitter debate between Blasey Ford's supporters and those who see Kavanaugh as a poster boy for men falsely accused of sexual misconduct.
"Men perceive that if women gain, men lose," Clara Wilkins, a social psychologist at Washington University in St. Louis, Missouri, told AFP.
She said research shows that "men think they are experiencing bias now more than they ever have before."
"The fact that Trump said this guy (Kavanaugh) has been unfairly accused is increasing men's belief that men are victimized," Wilkins said.
- 'A very frightening time' -
Men's fears have "a rational basis," insisted attorney Andrew Miltenberg, who told AFP he has defended "hundreds" of young men from allegations of sexual abuse, most of them arising in university settings.
"In most cases -- not all -- women are seeking revenge on ex-boyfriends or young men they found have played around too much," he said, adding that "it's very difficult for young men to get a fair opportunity to be heard."
"It's a very frightening time" for men, Miltenberg continued. "I don't really believe you can be alone in a room with a young woman now in this climate," at a time when such allegations can "destroy" a man's life and career.
A US Justice Department study, however, found that such false accusations are rare -- comprising no more than two to 10 percent of all complaints.
Moreover, one rape victim in 10 is a man, and an estimated three percent of Americans have been raped or sexually attacked.
Victims' rights groups thus stress that American men are at around the same risk of being the victim of sexual aggression as of being falsely accused -- meaning the #MeToo hashtag would apply to many more than the #HimToo.
Posted by free heip at 11:17