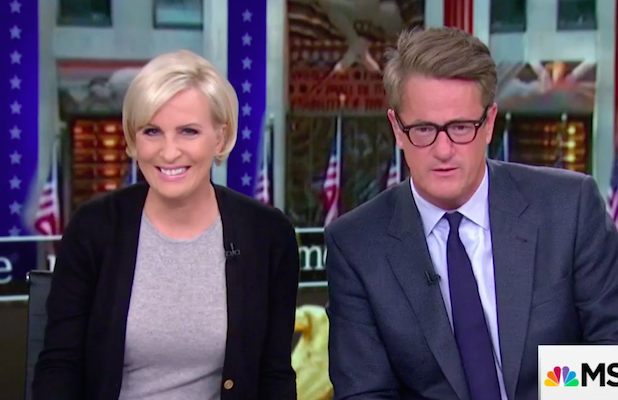 The set of “Morning Joe” offered analysis of President Trump’s interview on “60 Minutes” Sunday evening, focusing on the president’s frequent assertion to Lesley Stahl that he was not a “baby.”
Opening the show Monday, Joe Scarborough and Mika Brzezinski repeatedly called Trump a “baby,” and snickered as they introduced their guests for the 6 a.m hour.
“Baby President,” said Scarborough. “He’s a Baby. What a baby. What a baby. Well, more than one or two references about the emperor not having any clothes.”“He wants to make it clear to you that he’s not a baby,” said Brzezinski. “Seems like a baby. Big Baby and really really ill-equipped and unfit to lead this country.”Show regular and c0-host of Showtime’s “The Circus” John Heilemann also couldn’t resist getting in on the routine.
“Like a naked baby,” he said. “A clothes-free baby. That’s how babies are. They generally don’t have much in the way of clothing.”
President Trump spoke with Stahl for nearly 30 minutes Sunday evening in a wide ranging discussion that touched on Russia, China, North Korea, trade, climate change, Brett Kavanaugh and the disappearance of Saudi Arabian journalist Jamal Khashoggi. It was his first interview with Stahl and “60 Minutes” since they spoke two years ago shortly after his election.
While the president offers extensive commentary to Fox News and other favored outlets, he has been more reticent with other media — who generally pushback against his claims more. Trump routinely derides much of the press as “fake news.”
According to Stahl, Trump personally told that his tactic with the media was designed to lessen the impact of negative stories when they happen.
“He said, ‘You know why I do it? I do it to discredit you all and demean you all, so when you write negative stories about me no one will believe you,'” Stahl said in May. “He said that. So put that in your head for a minute.”