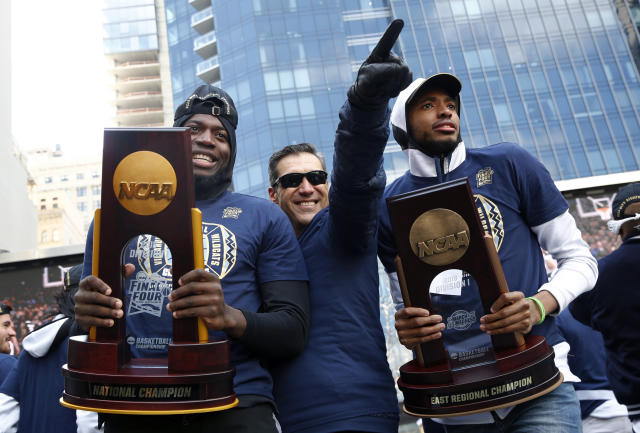 President Donald Trump‘s record of congratulating championship basketball teams at the White House is the opposite of winning.
The Villanova Wildcats men’s basketball team will not visit 1600 Pennsylvania Avenue after taking the NCAA championship in April, head coach Jay Wright said Thursday during Big East media day at Madison Square Garden.
They become the eighth American basketball champions to not complete a visit, making Trump 0-for-8.

Villanova yet to receive invite from White House

Wright said the school had yet to receive an invitation to the traditional champions’ ceremony, according to Asbury Park Press, nearly eight months after the Wildcats won their second title in three years.
When they won the 2016 title, Barack Obama met them at the White House in late May.
“Two years ago it was the experience of a lifetime for all of us,” Wright said. “It’s just a different time and I understand it. So it is what it is.”
Wright said if an invitation were to come, the team “probably wouldn’t be able to get everybody together” to visit. Staff members left for other jobs and some championship players are in their first NBA season already.

Eight basketball championships have been won since President Trump took the oath of office, but none have had ceremonies.
North Carolina, the 2017 NCAA men’s champion, was invited but “couldn’t find a date that worked,” according to USA Today.
The 2017 NCAA women’s champion, South Carolina, declined the invite it received in November 2017, once its new season was already underway.
And this year’s women’s champion, Notre Dame, has not visited nor indicated it had been invited.
The NBA’s Golden State Warriors declined its 2017 visit and were not invited in 2018.
Neither 2017 WNBA champion Minnesota Lynx nor the 2018 champion Seattle Storm were invited. The Storm won the title in August and several players have said they weren’t interested in going.
Traditionally many teams couple visiting the White House with community service. Some teams have instead done a full day of community service while in Washington, D.C.

Teams that visited the White House

Teams from other sports have made visits and received invitations in a reasonable timeframe. The Houston Astros visited in March, five months after their World Series victory and before the new season.
The Alabama football team visited in April, four months after winning the title and while school was still in session.
The Philadelphia Eagles were invited and a ceremony was planned, but Trump rescinded the invite when most of the team said it would not attend.

Presidents Andrew Johnson and Ulysses S. Grant invited teams to their homes in the late 1860s though the 1924 Washington Senators are believed to be the first title-winning team to visit the White House, according to the Washington Post.
The Boston Celtics were the first NBA champion to visit in 1963, after an invite from John F. Kennedy. The NFL’s Pittsburgh Steelers followed in 1980 with Jimmy Carter and the Pittsburgh Penguins in 1991 with George H. W. Bush.
The Indiana University men’s basketball team is believed to be the first NCAA champion to visit, doing so with Gerald Ford in 1976.
The practice of presidents inviting every championship winning team became commonplace in the 1980s, according to an ESPN piece, when Ronald Reagan made it a regular occurrence.
Some players over the years have chosen not to attend.
Posted by free heip at 19:57