'One job should be enough': Marriott hotel workers' strike hits eight US cities

Eight thousand members of the Unite Here union are demanding a living wage from the company that made $3.2bn last year 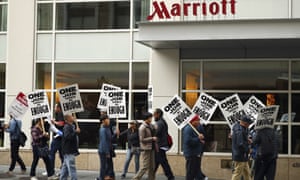 ﻿In eight cities across the US, almost 8,000 Marriott hotel employees are walking picket lines demanding better wages, workplace safety, and a seat at the table for technology changes in the latest strike organized among America’s low-wage workers.
Although the workers represent a small fraction of total worldwide Marriott employees, the union representing striking workers, Unite Here, is calling this “the largest multi-city hotel strike in North American history”.
Nearly two dozen hotels have been affected including in Boston, San Francisco, Honolulu, Kauai, Detroit, San Diego, Oakland and San Jose, according to Marriott International and Unite Here. The union represents approximately 20,000 Marriott hotel employees in total with another quarter-million workers in related industries
Although demands vary slightly between striking properties, the workers are striking under the slogan “One job should be enough,” a corollary to the Fight for $15 Movement spanning the service industry and demanding living wages in a rapidly changing economy. Activists say incomes have lagged far behind inflation and cost of living, and many complain they must often work two or three full-time jobs to afford basic necessities. 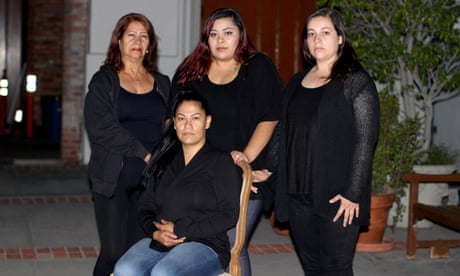 'It was like hell': California hotel workers break their silence on abuse

Read more
“I, at my age, have never had children myself because there’s no hope that I could afford – with the wages I’m making – to take care of a wife and a child. I’ll probably end up dying that way because I’ve never had enough,” said Michael Greenia, 55, a Marriott cook, while he stood inside a blue-tarp strike tent on a frigid and windy night in Detroit.
As he spoke, a small group of strikers beat snare and bass drums and blew whistles while walking in a circle in front of the Greek columns of the Westin Book Cadillac hotel, a cornerstone of downtown Detroit’s economic resurgence. They chanted slogans including, “Dirty beds, dirty sheets, take your business down the street.”
Workers in Detroit are saying they make $2-$5 an hour or $6,000 less per year on average than other major hotels in town, including another Marriott property, which is not on strike. Workers also say they would like a voice in coming technological changes, and that they suffer from injuries due to excessive workload and inadequate equipment.
It is a common story. “We’re over here sacrificing our bodies and our health, by skipping our lunch breaks, by holding it, having to use the bathroom, because that’s going to take time away from us cleaning our rooms. We sacrifice our lives to get these rooms to standard,” said housekeeper Jowenna Ellazar, by phone from Honolulu in Hawaii.
Contract negotiations began to break down this summer. The nationwide strike began in Boston when approximately 1,500 workers walked off the job in the first week of October, and has since spread. Unite Here says all locals are able to strike at will, and the strike is indefinite until demands are met.
“We see ourselves at Unite Here as helping to restore the strike to the labor movement,” said Rachel Gumpert, national spokeswoman for the union.
Marriott International would not comment directly on ongoing negotiations, but released a statement to the Guardian that read in part: “While we respect our associates’ rights to voice their opinions and participate in demonstrations and this work stoppage, we are disappointed that Unite Here has chosen to resort to a strike.
“During the strike our hotels are open, and we stand ready to serve our guests. We remain committed to negotiating in good faith to reach a fair contract for all parties. We will welcome any associate who chooses to continue to work.” 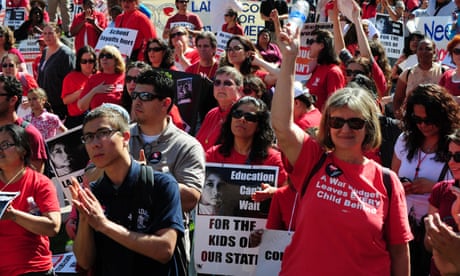 'There's no paper in the classroom': why Los Angeles teachers are moving toward a strike

Read more
Management for the Westin Book Cadillac in Detroit did not return calls for comment.
The willingness to strike is somewhat rare recently, according to Marick Masters, director of Labor@Wayne, at Wayne State University, dropping from a height of hundreds of strikes a year in the 1960s, to five to 20 a year over the last few decades. But it is coming back now, as evidenced by a wave of teachers’ strikes earlier this year that provided a shot in the arm for US labor activists.
“I think we’re going to see more movement for unions,” Masters aid, both in attempts for additional organization and increased agitation in those already unionized. “It is symptomatic of the fact that for years workers in general have suffered stagnant or declining wages and shrinking benefits, and the tipping point has been reached where they want to assert their ability to extract what they consider to be a fair price for their services.”

Marriott is the largest and probably most profitable hotel company in the world, with earnings of $3.2bn for 2017. The strikes may be having an economic impact on hotel owners, as high-profile conferences and galas have moved from striking properties including a CityLab conference in Detroit, and the large Communications Network conference in San Francisco.
“In a time when the popular narrative says that unions cannot organize, Unite Here is rapidly organizing and growing because of the courage and strength of our members,” wrote D Taylor, international president of Unite Here, in a statement to the Guardian. “Our Unite Here Marriott strikers are transforming the hospitality industry, and raising standards for all North American workers.”
Back on the chilly picket line in Detroit, Unite Here Local 24’s president, Nia Winston, was confident during the third week of the strike.
“All we’re asking for is a livable wage, our fair share, and parity,” She said. “A worker … should not have two and three jobs to make ends meet.”
She was echoed by Mahalaleel Burbidge, a Westin cook, rhythmically beating a bass drum.
“The stage that’s been set in America has been set for people to barely survive. I’m swimming with my nose underwater.”

… we have a small favour to ask. More people are reading The Guardian’s independent, investigative journalism than ever but advertising revenues across the media are falling fast. And unlike many news organisations, we haven’t put up a paywall – we want to keep our reporting as open as we can. So you can see why we need to ask for your help.
The Guardian is editorially independent, meaning we set our own agenda. Our journalism is free from commercial bias and not influenced by billionaire owners, politicians or shareholders. No one edits our editor. No one steers our opinion. This is important because it enables us to give a voice to the voiceless, challenge the powerful and hold them to account. It’s what makes us different to so many others in the media, at a time when factual, honest reporting is critical.
If everyone who reads our reporting, who likes it, helps to support it, our future would be much more secure.
Posted by free heip at 04:28