Trump responds to Times tax bombshell: '97% of their stories on me are bad' 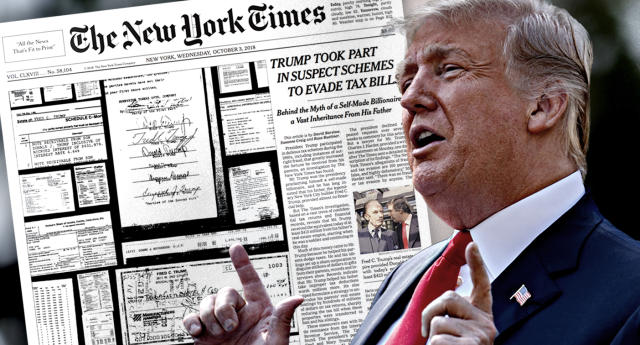 President Trump on Tuesday lashed out at the New York Times over its yearlong investigation into his finances.
“The Failing New York Times did something I have never seen done before,” Trump tweeted. “They used the concept of ‘time value of money’ in doing a very old, boring and often told hit piece on me. Added up, this means that 97% of their stories on me are bad. Never recovered from bad election call!”
The “time value of money” is a term in economics that reflects the fact that money available at the present time is worth more than the same amount in the future due to its potential earning capacity. Trump himself referenced the concept in his 1987 book, “The Art of the Deal.”
It’s unclear where the president got the 97 percent figure.
According to the Times report, published Tuesday, Trump “participated in dubious tax schemes during the 1990s, including instances of outright fraud, that greatly increased the fortune he received from his parents.”
Throughout his presidential campaign, Trump described himself as a self-made billionaire who received a “small” loan from his father, Fred Trump. But according to the Times, Trump “received the equivalent today of at least $413 million from his father’s real estate empire, starting when he was a toddler and continuing to this day.”
“Much of this money came to Mr. Trump because he helped his parents dodge taxes,” the Times said. “He and his siblings set up a sham corporation to disguise millions of dollars in gifts from their parents, records and interviews show. Records indicate that Mr. Trump helped his father take improper tax deductions worth millions more. He also helped formulate a strategy to undervalue his parents’ real estate holdings by hundreds of millions of dollars on tax returns, sharply reducing the tax bill when those properties were transferred to him and his siblings.”
The New York state taxation authority said it “is reviewing the allegations in the NYT article and is vigorously pursuing all appropriate avenues of investigation.”
The White House responded to the report in a lengthy statement attributed to press secretary Sarah Sanders.
“Fred Trump has been gone for nearly twenty years and it’s sad to witness this misleading attack against the Trump family by the failing New York Times,” she said. “Many decades ago the IRS reviewed and signed off on these transactions. The New York Times’ and other media outlets’ credibility with the American people is at an all time low because they are consumed with attacking the president and his family 24/7 instead of reporting the news.
“The truth is the market is at an all-time high, unemployment is at a fifty year low, taxes for families and businesses have been cut, wages are up, farmers and workers are empowered from better trade deals, and America’s military is stronger than ever,” she continued. “Yet the New York Times can rarely find anything positive about the President and his tremendous record of success to report. Perhaps another apology from the New York Times, like the one they had to issue after they got the 2016 election so embarrassingly wrong, is in order.”
Trump — who as a candidate refused to release his income tax forms — has obsessed over estimates of his net wealth and sparred with reporters who dared to challenge his own valuation.
This year, Jonathan Greenberg, a former Forbes reporter, described the lengths Trumpwent to in order to be placed higher on the magazine’s annual ranking of America’s richest people.
According to Greenberg, Trump once called him pretending to be his spokesman, using the name  “John Barron.” (Barron, it was later revealed, was an alter ego used by Trump.)
Trump later had his lawyer, Roy Cohn, intervene.
“This is Roy. Roy Cohn!” Cohn said during one call recorded by Greenberg. “Donny tells me you’re putting together this list of rich people. He says you’ve got him down for just $200 million! That’s way too low, way too low!”
Posted by free heip at 08:51