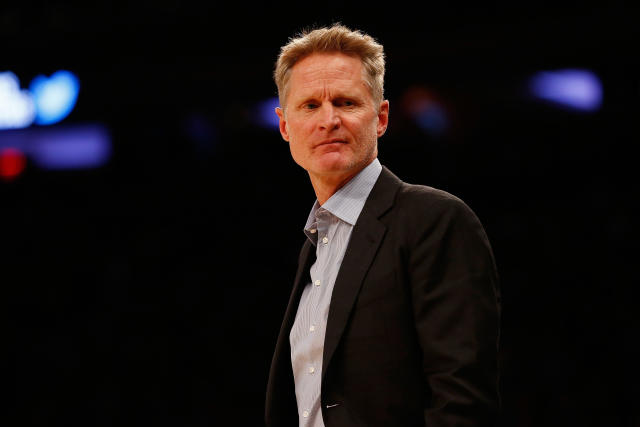 NEW YORK — In the wake of Saturday’s shooting at a synagogue in Pittsburgh that resulted in the deaths of 11 people, Golden State Warriors coach Steve Kerr called the United States a “broken” country.
Kerr has been an outspoken critic of President Donald Trump, and after pipe bombs were mailed to former Presidents Barack Obama and Bill Clinton, Democratic nominee Hillary Clinton and other key outspoken figures, Kerr didn’t hesitate to speak out.
Sunday afternoon, some 90 minutes or so before the Warriors were to take on the Brooklyn Nets at Barclays Center, Kerr was impassioned, yet again saddened, by the tragedy and the climate that purportedly caused it.
“It’s just devastating. I just expect it now and that’s just the sad thing,” Kerr said. “I remember watching an interview with a student after the Santa Fe shooting in Texas [in May]. A 14-year-old girl, she was asked, ‘Did this shock you?’ She said, ‘No, I expected that this would happen to us at our school at some point.’ That’s where we’ve gotten as a country. We’re broken right now.
“So nothing surprises us anymore. Nothing surprises me anymore. There’s shootings at schools, churches, synagogues, malls, movies theaters.”
The suspect was taken alive by the police, and the FBI said he was carrying an AR-15-style rifle and three handguns at the Tree of Life Congregation, where he allegedly shouted anti-Semitic slurs before the mass shooting took place.
“We need our leaders to step up and unite the country with the appropriate words and actions, and we’re not getting that right now,” Kerr said. “It’s frustrating and I don’t know what to say.”
Midterm elections are upon us, and NBA coaches like Doc Rivers have spoken out about the importance of voting and have worn pins with the phrase “I am a voter” on their suits during games.
Kerr has made his position and opinions on political issues public, and he has been a constant retweeter of issues surrounding gun control on his Twitter account.
“We need to vote. I urge everybody to get out and vote on Nov. 6,” Kerr said. “Everybody has their own issues that are important to them. My personal issue is gun safety, gun control. Nobody in this country should have a semiautomatic weapon of war. That’s my personal belief.”
In many of the recent shootings over the past year, from the Stoneman Douglas High School shooting in Parkland, Florida, to the Las Vegas mass shooting at the Harvest Music Festival, a semiautomatic weapon was used.
Kerr said he will vote for candidates who plan on banning those types of weapons.
“I’m going to vote for every candidate willing to stand up to the NRA and say, ‘You know what? This is insane,’” Kerr said. “We’re murdering each other every day. We have to get rid of bump stocks, we have to get rid of high-capacity magazines. We have to get rid of semiautomatic weapons, we just do.
“Other countries don’t go through this. And so that’s the issue that’s most important to me and that’s the candidates I will be voting for, the ones who are willing to stand up and say this is wrong, we have to protect our fellow citizens and protect our country.”
Kerr’s father, Malcolm Kerr, president of the American University of Beirut, was assassinated outside his office in Lebanon in 1984, when Steve Kerr was 18 years old.
Kerr hasn’t been the only coach to speak out about weapons or even the political rhetoric that has defined this country since Trump’s rise — San Antonio Spurs coach Gregg Popovich is also a constant Trump critic — and Kerr has applauded players such as LeBron James and Dwyane Wade who’ve used their platform to make progressive statements.
Kerr said as long as the statements aren’t divisive and in the name of positive social change, he’s all for it.
“More and more you’re seeing people in the sports world, athletes and coaches speaking out,” Kerr said. “It’s easy to feel broken right now, how our country is. Everybody can have influence, not just our political leaders. People who are well-known figures and have cameras in their face a lot or average citizens, being kind to each other and being nice to one another, not just spewing hatred on social media. Those are things we have to think about to try to accomplish to get our country back on track.”
Posted by free heip at 06:28