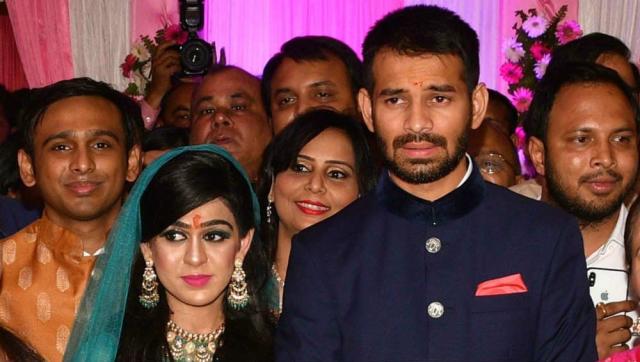 News18 India shared the news of Tej Pratap filing for divorce in Patna Court. Check the tweet below:
The high profile wedding, saw over 10,000 guests, and was the talk of the town as speculations over Lalu Yadav's parole had heightened as the marriage date approached. Lalu was finally granted a 3 day parole which got extended to 6 weeks just a day before marriage. Earlier, the RJD chief had applied for a 5 day parole but had been granted a 3 day parole only to attend his son's wedding. Tej Pratap & Aishwarya Rai Marriage Pics: Nitish Kumar Visits Lalu Yadav son's Wedding, Greets RJD Chief.
Tej Pratap Yadav got married to the daughter of RJD leader and lawmaker Chandrika Rai and grand daughter of former Bihar CM Daroga Rai. The engagement ceremony had taken place on April 18 but Lalu could not be part of it as he has been serving jail term in Birsa Munda Jail in Jharkhand after getting convicted in the fodder scam case. Lalu Prasad Yadav attended son Tej Pratap's marriage taking leave on medical grounds. Tej Pratap Yadav Exposes a Little too 'Much' While Taking Bath at Handpump, Video Goes Viral.
RJD leader Lalu Prasad Yadav's family has been in the news for the reported feud in the family for some time now. Only recently, reports of Tej Pratap Yadav taking retirement from politics were doing rounds after he had reportedly said that he was hurt as he was ignored in the party. Tej Pratap has often been in the news for not exactly the right reasons and has developed a reputation of sorts owing to his strange acts bordering on theatrics.
Posted by free heip at 12:22