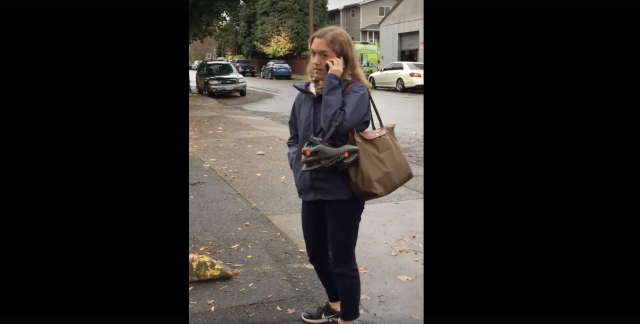 “Crosswalk Cathy” called the Portland, Ore., Bureau of Transportation on a couple — for a poor parking job.
“This lady called the police on me because she says my car was blocking the crosswalk. Crosswalk Cathy,” Portland resident Mattie Khan wrote on Facebook Monday with a video of the woman.
“You can’t block the crosswalk,” says the woman in the video to Khan and her friend, Rashsaan Muhammad.
Khan responds, “This is another white person calling the police on a black person because she’s saying we’re illegally parked right now.”
“You are!” the woman responds adding that she’s been observing Khan’s car for 10 minutes.


This lady called the police on me because she says my car was blocking the cross walk.🤷🏽‍♀️ crosswalk Cathy
Posted by Mattie Khan on Monday, October 29, 2018

Khan and Muhammad told the Portland Mercury Tuesday that while recently waiting for a takeout order from the restaurant Little Big Burger in Portland, they noticed a woman watching their vehicle.
“She looked odd, but it didn’t alarm us,” Muhammad told the Mercury. When the couple returned with their food, Muhammad says the woman was on the phone describing their car and reading off their license plate number.
“I tried to start a conversation, I asked her who she was calling and what was going on,” Muhammad told the publication. “It was clear she was talking to the police.”
The Portland Mercury spoke to an anonymous source who claimed to be the woman’s friend and said that the caller was speaking to the Portland Bureau of Transportation‘s parking enforcement hotline, a representative of which did not respond to Yahoo Lifestyle’s request for comment.
Muhammed acknowledged his imperfect parking job but tells the website, “She didn’t try to talk to us. She just called the police. Why would people spend the time just trying to make our lives harder instead of talking it out like neighbors?”
The man told the Mercury of the phone call, “It’s part of a bigger problem that we as a community need to address. New people come in and change a neighborhood and it causes these kind of stressful situations. We don’t interact with each other they way we used to.”
#Crosswalk Cathy is now a hashtag on Twitter.
Khan and Muhammed did not respond to Yahoo Lifestyle’s request for comment.
Posted by free heip at 09:21