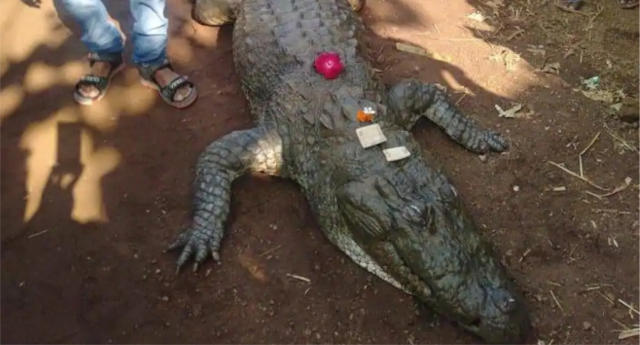 On Tuesday morning, the residents of Bawamohatra, a village in Bemetra district of Chhattisgarh, gathered near the community pond and started weeping after they saw that a crocodile, called Gangaram, had died.
The over three-metre-long reptile was buried in the village after his last rites were performed by the villagers.
A forest department official estimated that the crocodile was 130 years old.
RK Sinha, sub divisional officer (forest), told Hindustan Times the post-mortem was conducted in the presence of the villagers, after which the body was handed over to them. The crocodile died of natural causes.
The crocodile was carried to its funeral on a tractor decorated with flowers and garlands and 500 people attended its last rites.
Basawan, a villager, said Gangaram was friendly. “Even the kids of the village could swim around him and Gangaram had never harmed or attacked anyone. Gangaram was not a crocodile but a friend and a divine creature for us who was worshipped in this village,” said Basawan.
“He would even eat rice and dal which was served by the villagers and kids. Gangaram was very understanding. If he saw anyone swimming near him, he used to go to the other side of the pond,” said Veer Sing Das, a resident of village Dhara .
Village sarpanch Mohan Sahu said: “We used to identify ourselves with the crocodile as people used to call this village – Magarmachha vala gaaon.”
“The villagers were sentimentally attached with the crocodile. We have decided to hand over the body to them and they have buried the crocodile near the pond. They want to build a statue near the pond to remember Gangaram,” said Sinha.