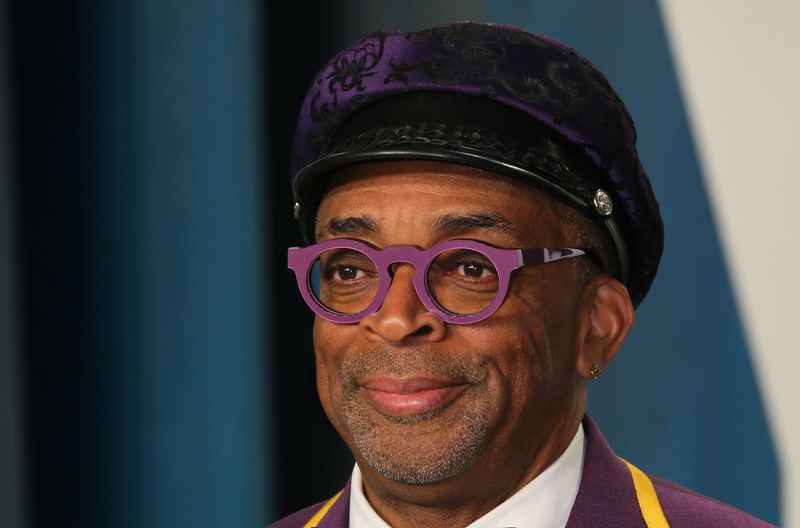 US director Spike Lee attends the 2020 Vanity Fair Oscar Party following the 92nd Oscars at The Wallis Annenberg Center for the Performing Arts in Beverly Hills on February 9, 2020.


Spike Lee is doing a good deed with a good read.
While social distancing measures and self-quarantine practices have become the new normal for humankind during the coronavirus crisis, the filmmaker has put one of his most prized possessions out into the universe — for everyone to experience.
On Sunday, the Oscar-winning “Do The Right Thing” director gave movie fans, sports enthusiasts and cinephiles plenty to do during their down time, when he announced that he released the script for his un-produced Jackie Robinson film.
“Afternoon From Da Corona Epicenter Of The USA-NYC,” Lee wrote on Instagram, sharing a video of himself sitting on his couch. “I Dug Deep Into Da 40 Acres Vault And Pulled Out This Script From One Of My EPIC Dream (Never Got Made) Projects-JACKIE ROBINSON."
Based on based on the legendary baseball player’s 1972 autobiography, “I Never Had It Made,” the script dates back to 1996, the year Lee wrote it.
"You Do Not Have To Be A Baseball Fan To Enjoy," he continued. "This Script Is A Great American Story. Be Safe. Peace, Light And Love. And Dat’s Da “Brooklyn Dodger” Truth, Ruth. YA-DIG? SHO-NUFF.”

In the clip, the auteur reveals that his script — which was his fifth draft of the screenplay — centered around Denzel Washington, who starred in the Lee-helmed movies “Mo Betta Blues,” “Malcolm X,” “He Got Game” and “Inside Man.”

Lee said he hoped to reunite with the actor but Washington felt he was “too old” to play the baseball legend, who helped to shatter Major League Baseball’s color barrier.

“Hope you enjoy it,” he said. “If not, that’s alright, too. It’s never getting made, but I wanted to share this script with you. Be safe! Be safe! Social distancing! Peace.”

According to The AV Club, it covers the majority of Robinson’s life, including his college career at UCLA, his time spent in the military, his ascent to the majors, and even his life after baseball.

The late, trailblazing sports icon’s life story has been the subject of several films, including the 1950 Alfred E. Green film starring Robinson as himself, and the critically-acclaimed 2013 film, “42,” which was the breakout feature film debut for Chadwick Boseman (of “Black Panther” fame).