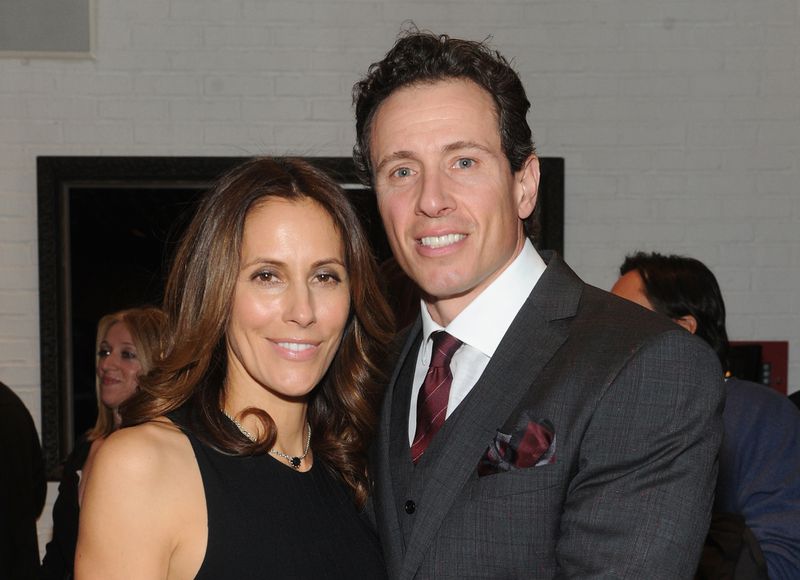 Cristina and Chris Cuomo attend the Opening Of John Varvatos Madison Avenue on April 3, 2014 in New York City. Cristina gave a detailed Instagram update Monday on her husband's condition and treatment as he battles coronavirus.(Jamie McCarthy/Getty Images for John Varvatos)

CNN anchor Chris Cuomo is making progress in his battle against coronavirus after a brutal week that included shivering so violently that he chipped a tooth.
The newsman, brother of Gov. Cuomo, was on “day 11” Monday, marking the time since he first exhibited allergy-like symptoms, his wife, Cristina Cuomo, posted in an update on Instagram.
“Many have asked how Chris is doing and what meds he’s taking. Here’s an update,” she said in a post that began with, “Every day is a gift.”
“After one week of up and down symptoms — chills, body aches, total exhaustion, sleeplessness, and a fever that hit 103, he is on day 11 today, (day 1 being first day of allergy-like symptoms) — he seems slightly better, but still feels the incredible lethargy, with fever down to 99 for past 3 days,” Cristina Cuomo wrote.

His oxygen levels as tested daily are normal, she said.
“He has maintained his sense of taste and smell, but not his usual hearty Italian appetite,” she continued. “His lungs were x-rayed yesterday, and they were clear.”
She shouted out thanks for “amazing homemade goodies” that had poured in from friends and well-wishers, as well as the “love + humor so many of you have provided,” she said, calling them “the oxygen for these biblical times.”
Cristina Cuomo went on to detail her husband’s do-it-yourself treatment protocol, which was mainly alternative medicine given the lack of known treatments. Week one, she said, entailed administering “oxygenated herbs, natural remedies and homeopathics to boost Chris’s immune system for the battle ahead,” under the auspices of an “energy medicine physician” with training in “Ayurveda, medical radiesthesia, radionics, energy healing, nutrition, herbal medicine and detoxification methods.”
She fed her husband “basic chicken soup, and foods low in immune-busting chemicals like pesticides” as a way to put less stress on his system and allow it to better fight the invader.

He also got 30 minutes a day of sunshine to boost vitamin D levels, did breathing exercises to stave off pneumonia, and walked around the yard.

Cuomo has been living in his basement since his diagnosis, continuing to broadcast his show, “Cuomo Prime Time,” from there.

Between times he is sleeping 10 hours a day and mostly lethargic, he told CNN’s Anderson Cooper last week.

“The beast,” as he called the virus, “comes out at night.”

“It was like somebody was beating me like a piñata,” he said in his broadcast, quoted by The Washington Post. “And I was shivering so much … I chipped my tooth.”
Posted by free heip at 03:41