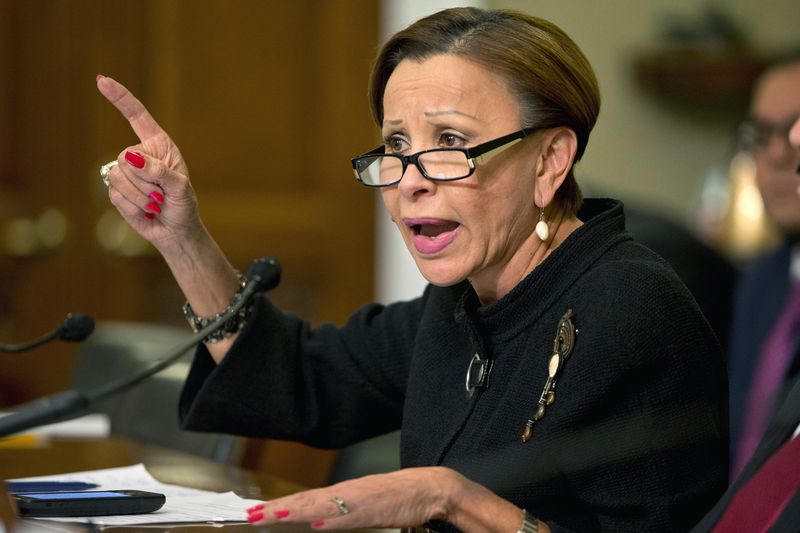 Measures to combat a COVID-19 outbreak inside a federal jail in Brooklyn are woefully inadequate, Congresswoman Nydia Velazquez wrote in a letter Monday, detailing screwups she fears will make the lockup “a potential powder keg of coronavirus infection.”
Soap is in short supply at the Metropolitan Detention Center on the Sunset Park waterfront, according to the letter Velazquez sent to the Bureau of Prisons Monday. Yet correctional officers and other staff are prohibited from bringing alcohol-based hand sanitizer or their own face masks to work.
Staff are rotated in and out of four housing units in quarantine without adequate protective gear, Velazquez wrote. Correctional officers who go home with COVID-19 symptoms are routinely ordered to return to work “in a couple days,” according to the letter.
Meanwhile, the jail holding 1,700 inmates is one of the busiest in the federal system, with 150 or 200 inmates coming or going from the facility per week.

“Allowing coronavirus to spread rampantly among the prison population is not only morally unacceptable and inhumane, but it also puts guards, staff and their families at risk, further fueling spread inside and outside these facilities. Walls won’t stop the virus and I’m concerned the prison system could be a potential powder keg of coronavirus infection if BOP doesn’t move fast,” said Velazquez, who is recovering from her own case of presumed coronavirus.
The allegations detailed in Velazquez’s three-page letter, which her staff compiled after conversations with BOP personnel, were confirmed by Anthony Sanon, a correctional officer and president of the union local at MDC.
Correctional officers working in quarantined units received only one mask per shift, he said. But staff responding to emergencies in those units enter without masks, he said.
“The soap dispensers are empty. They have no soap in there,” Sanon said of housing units throughout MCC.
[More New York] SEE IT: Man in mask burns Brooklyn woman with unknown chemical »
“A lot of us are getting sick, it’s sad. Management can’t come out and protect us in this environment.”


MDC Warden Derek Edge reported Friday that a mere seven inmates at MDC had been tested for coronavirus, two of whom were positive. Sanon said seven staff had tested positive for coronavirus, but he believed the number was larger. Staff have to get tested on their own, he said. BOP policy requiring that officers use sick leave encourages them to try and tough it out and keep supervisors in the dark, he said.
Velazquez (D-Brooklyn) wrote that staffers feeling under the weather were routinely called back well short of the CDC-recommended 14-day quarantine period.
MDC became the first federal lockup to report an inmate tested positive for the virus on March 21.
“So many of our staff were around that inmate and should have been quarantined. A lot were sent home and brought back the next day — two days at the most,” Sanon said, calling MDC management’s handling of the case “absurd.”

Correctional officers are routinely working 16-hour days, three or four days in a row, he said.

Sanon urged the Bureau of Prisons to drastically limit the movement of inmates between facilities. MDC currently serves as a key hub for inmates being transported among facilities in the northeast, he said.

MDC and its sister facility, the Metropolitan Correctional Center in Manhattan, have been plagued by dysfunction and staffing problems for several years.

Velazquez emphasized that the risk of coronavirus infection was not limited to those inside the jail.

“Employees at MDC Brooklyn reside in all five boroughs of New York City and New Jersey. The continued spread of COVID-19 in this facility would jeopardize not only detainee populations, but also communities in the region, thereby undermining local public health efforts to bring the virus under control,” Velazquez wrote.
The Bureau of Prisons did not respond to an inquiry.
Posted by free heip at 03:31