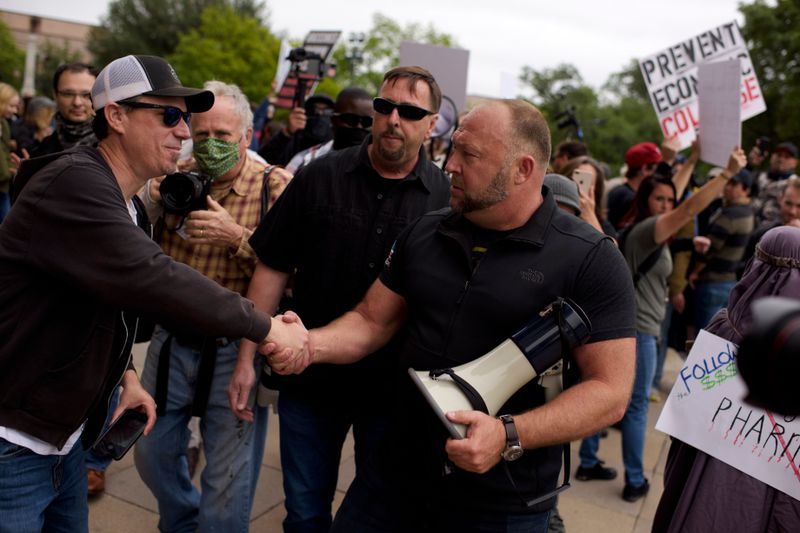 
Right-wing conspiracy theorist Alex Jones shook hands with several protesters in Texas who want the state to re-open businesses during a pandemic that has so far killed about 40,000 Americans and more than 166,000 people worldwide.
Video on Twitter shows Jones and fellow coronavirus skeptics proudly ignoring health officials’ warnings to social distance and keep their mouths and noses covered to avoid spreading germs.
Dr. Anthony Fauci, the nation’s foremost expert on infectious diseases, has urged Americans to cease the tradition of handshaking even after the coronavirus pandemic ends.
Jones was warned by the FDA earlier this month to stop hawking phony elixirs on his InfoWars show, where he also called the 2012 Sandy Hook school shooting in Connecticut “a giant hoax” perpetrated by politically motivated actors.
Jones claimed the White House had approved the coronavirus remedies he sells on his program, which include “Superblue Silver Immune Gargle.” President Trump, who has appeared on InfoWars, once told Jones “Your reputation is amazing.”

Shouting through a bullhorn Saturday, Jones blamed the Chinese government, globalists, communists, reporters and the Deep State for damage done by pandemic, which he called “a bioweapon meant to shut down our economy.”

“We don’t live in fear of some made-up virus!” Jones yelled. “We know the globalists and the media are enemy!”

Demonstrators at the Austin, Texas rally reportedly called for the firing of Dr. Fauci, who has been the director of the National Institute of Allergy and Infectious Diseases since 1984. President Trump last week retweeted a call for Fauci to be cut loose as well.

Protests like the one Jones attended over the weekend have popped up in several states in recent days including Kentucky, where an uptick in infections has been reported in the aftermath of such rallies. The Blue Grass state is likely to extend its lockdown on account of that development.

“We’re still in the midst of the fight," Gov. Andy Beshear said in announcing Kentucky won’t be able to loosen restrictions for at least two more weeks.

More than 16,000 Texans are known to have been infected by the virus.

Conservative commentators on Fox News as well as radio giant Rush Limbaugh have been criticized by journalism professionals for misrepresenting facts regarding the coronavirus.
Posted by free heip at 10:31