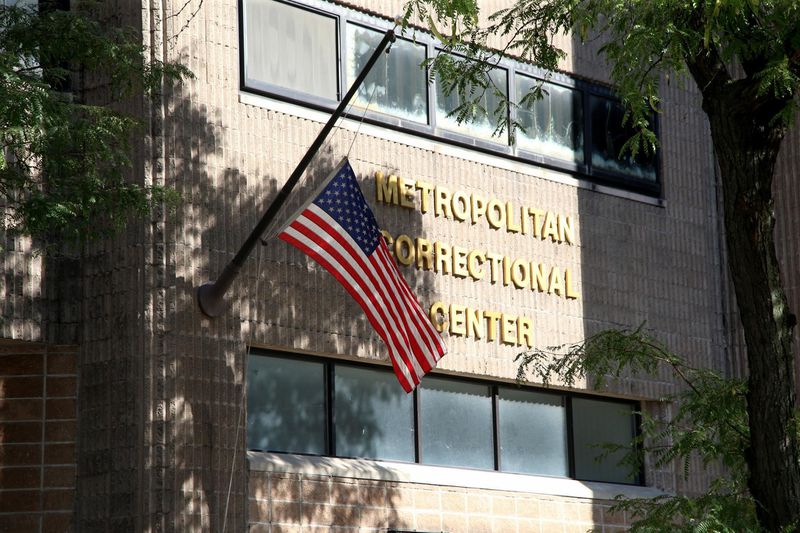 Coronavirus is raging through New York City’s two federal jails — yet jail staff, defense attorneys and inmates interviewed by the Daily News say the official numbers of COVID-19 cases obscure the magnitude of the crisis behind bars.
Officially, the Bureau of Prisons reports that 24 staffers have tested positive for coronavirus at the Metropolitan Correctional Center in lower Manhattan. Tyrone Covington, a correctional officer and president of the union local at the jail, disputed that figure.
“That number is totally bogus,” Covington said.
According to him, 36 staffers have tested positive for coronavirus. A daily roster of people available for work continues to list names of those who have tested positive, he said.

“I’ve pointed this out to the federal Bureau of Prisons. ... The fact they don’t know this should be alarming in itself,” Covington said.
The discrepancy between jail union officials’ numbers and the feds’ official figures could be due to the fact that most correctional officers have to get tested on their own, staffers said. The News exclusively reported Friday that the warden of MCC was among those infected with the virus.
Five inmates have tested positive at MCC. Five out of 10 units at the jail holding 750 inmates are in quarantine, according to Covington.
At the Metropolitan Detention Center in Brooklyn, 16 staff and five inmates have tested positive. In total the two jails have tested 19 inmates out of nearly 2,500.
More staff are home sick with suspected coronavirus, according to the union representing correctional officers. The Brooklyn jail has no infirmary and a medical staff of 12, including two doctors, according to a medical staffer.
“Overall, I believe a lot of people are sick, and it’s like a balancing game whether they just have flu symptoms, cold symptoms or viral symptoms because the symptoms are pretty much the same. It’s likely there are more people sick and we don’t know for sure who has it,” the medical staffer told The News.
Inmates at MDC and MCC are getting tested for coronavirus in such small numbers that the official number of positive cases is virtually meaningless, Federal Defenders of New York Attorney-in-Chief David Patton said.
“What’s their latest hogwash at MCC — five inmates?” Patton said.
“The only reason the staff numbers are higher is because they can go get tested on their own. It’s not even a close call. The numbers are sham numbers.

MDC’s failure to send home at least one symptomatic correctional officer appears to have exacerbated the outbreak.

The correctional officer assigned to intake said he started started to feel sick in late March and developed a fever. He was sent home for the day — and was asked to return to work 24 hours later, he told The News.

He worked alongside other correctional officers for a week in a room the size of half a basketball court where busloads of new inmates are brought into the Metropolitan Detention Center in Sunset Park every day before going home sick again with coronavirus symptoms. He was hospitalized for three days due to trouble breathing. On April 7 he received a positive test for COVID-19.

“At first I had symptoms and got sent home but they said I could come back to work because I only had one symptom, fever,” the officer, who requested anonymity, told The News. “I was feeling symptoms for about two weeks and then I had to get hospitalized for three days because I couldn’t breathe.”

On April 7, the officer received the results of his COVID-19 test: positive. He is one of a number of officers who have been hospitalized for the virus, according to the corrections officers’ union. None have died.

Five other staffers in intake at MDC also have tested positive. An MDC intake officer who came down with COVID-19 symptoms in late March said he and colleagues only received gloves — no masks — at the time.

“It’s an area with no windows, no ventilation, very limited cleaning supplies and we’re not allowed to bring our own, and we had no masks,” an MDC intake officer who came down with COVID-19 symptoms said. “So you’re setting up an environment to spread this disease. And then they’re sending down 40 or 50 inmates at a time.”

“You can’t have an inmate population as high as it is and staffing as low as it is and have a safe and orderly jail.”

Federal prosecutors, meanwhile, are opposing an avalanche of emergency bail applications from inmates by arguing that the jails are properly combating the virus.

At least 53 inmates have been released from the Brooklyn lockup and 38 from Manhattan due to coronavirus concerns, according to Deirdre Von Dornum, the attorney-in-charge at the Federal Defenders.

She noted that those figures pale in comparison to the more than 1,400 inmates released from Rikers Island, where much more widespread testing revealed more than 300 inmates have the virus.

“We continue to have to fight for release from these dangerous facilities person by person, one by one, unlike in New York City jails where the facilities, prosecutors and defense lawyers worked together to reduce the population,” Von Dornum said.

The Prisons Bureau said it had implemented a broad effort to contain the virus.

“We are deeply concerned for the health and welfare of those inmates who are entrusted to our care, and for our staff, their families and the communities we live and work in,” a spokesman said. “It is our highest priority to continue to do everything we can to mitigate the spread of COVID-19 in our facilities.”